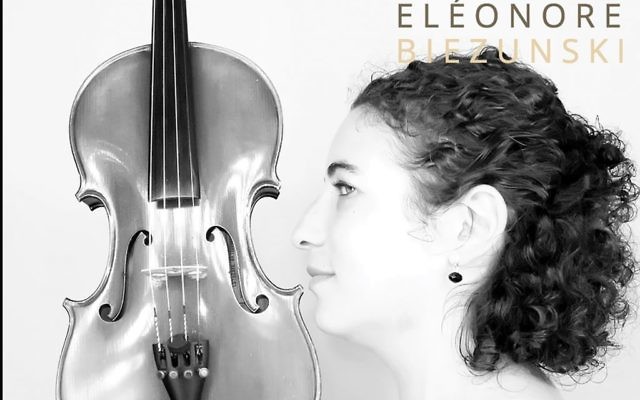 Commanding over a tentet of strings, horns, percussion and keyboards, the award-laden, Tel Aviv-born clarinetist/saxophonist and composer — “a present-day multicultural wonder,” says The New Yorker — will play a blend of traditional jazz, post-bop, Brazilian and Middle Eastern musical strains. The Jazz Journalists Association has voted Cohen its top clarinetist nine years running, and she has topped both the Critics and Readers Polls in the clarinet category in DownBeat magazine every year since 2011. — Friday, Aug. 25, 7-9 p.m., SummerStage, Marcus Garvey Park, 124th Street and Fifth Avenue, cityparksfoundation.org.

As both a YIVO archivist and a klezmer musician, French violinist Eleonore Biezunski (Klezmographers, Shtetl Stompers, Shpilkes) has been exploring Yiddish traditions of old and new for years. In her new project, Yerushe (Heritage), she teams with Lauren Brody (vocals, accordion) and Joanna Sternberg (vocals, double bass) to explore the heritage of women’s Yiddish folksongs, orally transmitted to them or carefully preserved by folklorists. — Sunday, Aug. 27, 7 p.m., Barbès, 376 Ninth St., (347) 422-0248, barbesbrooklyn.com. $10.

LILI MARLENE
“Lili Marlene” was the title of a World War II-era German song that became popular with both the Axis and the Allies. Set in pre-WWII Berlin, this similarly titled Off-Broadway musical (with book and music by Michael Antin) centers on the fictional character of Rosie Penn (Amy Londyn), a Jewish cabaret singer whose rendition of the song makes it famous. Penn develops an unlikely love affair with a young German count named Willi (Clint Hromsco) who happens to be responsible for the issuance of passports to German citizens. As Nazi nationalism swells, the count realizes he must use his position to get himself and his loved ones out of the country. — Tuesdays, 7 p.m., St. Luke’s Theatre, 308 W. 46th St., (212) 239-6200, Telecharge.com.

Like most kids on her kibbutz, Tali Rubinstein began playing the recorder in second grade. Unlike most, she never stopped. Drawing upon her classical training, jazz inclinations and Israeli and Middle Eastern upbringing, Rubinstein’s recorder-centric originals and covers “laid to rest the notion of the recorder as a beginner’s toy,” said JazzTimes. Since her 2006 move to NYC as an AICF grantee, this little-recognized singer/instrumentalist has performed with Anat Cohen, Idan Raichel, David Broza and Dudu Fisher and released three albums of her own in collaboration with Grammy-winning producer Javier Limón. Riffing heavily off Israeli music of the ’60s and ’70s, the albums trace a line between the recorder and Israel’s youth that is rich and surprisingly complex. “The recorder was the instrument of the kibbutz,” Rubinstein told the Times of Israel. “But only now, surrounded by musicians from around the world, do I make these connections between what I do and Israel.” — Sunday, Aug. 27, 5 p.m., Rockwood Music Hall, 196 Allen St., (212) 477-4155, rockwoodmusichall.com.

AMERIKE
Created by Zalmen Mlotek and Moishe Rosenfeld in 1984, the musical “Amerike — The Golden Land,” weaves stories and observations collected from New York’s Yiddish-speaking immigrants. The National Yiddish Theatre Folksbiene is now reimagining the production, documentary-style, heightened by the use of projection designs and a live seven-piece klezmer band on stage. Directed by Drama Desk-nominee Bryna Wasserman, “Amerike” is performed in Yiddish with Russian and English supertitles. — Through Aug. 20, Museum of Jewish Heritage, 36 Battery Place, (866) 811-4111, mjhnyc.org.

Starring Sabra actress/model/former Miss Israel Gal Gadot, the first A-list Israeli movie star ever, the smash-hit film follows Diana, princess of the Amazons and demi-god, as she grows up on an all-female, all-warrior, all-Israeli-accented island. After a handsome British pilot fighter (Chris Pine) arrives on the island and alerts her to the First World War raging outside, the two rush off to save the world through their combined military prowess. — In very wide release.

Starring a real-life Menashe (the Skverer chasid Menashe Lustig), Joshua Z. Weinstein’s “Menashe” follows the tale of a widower pushing against the conventions of his tight-knit, family-oriented community by trying to win custody of his young son. In his debut feature, Weinstein, a documentarian, shows a real feel for the rhythms and cadences of chasidic life. It’s sweet and sad all at once, and a New York story through and through. — Angelika Film Center, 18 W. Houston St., angelikafilmcenter.com, and Lincoln Plaza Cinema, 1886 Broadway, lincolnplazacinema.com.

IN SEARCH OF ISRAELI CUISINE

This tasty, feature-length documentary is a portrait of the Israeli people told through food. More than 70 cultures comprise the Israeli people, each with its own culinary traditions; featured here are profiles of chefs, home cooks, vintners and cheese makers drawn from the Jewish, Arab, Muslim, Christian, Druze and other cultures that make up Israel today. — Sundays through August, 5:30 p.m., Symphony Space, 2537 Broadway, (212) 864-5400, SymphonySpace.org.

The Israeli-born pianist is a former member of bassist Avishai Cohen’s trio and currently leads his own trio. “Hearing the Shai Maestro trio is like awakening to a new world: a world of wonders, excitement, beauty, and uncertainty,” says All About Jazz. Maestro will perform a solo piano version of originals from his 2014 album, “Untold Stories,” and more. — Monday, Aug. 21, 7:30 and 9:30 p.m., Jazz Gallery, 1160 Broadway, 5th fl., (646) 494-3625, jazzgallery.nyc.

Israeli-born, New York based saxophonist and composer Uri Gurvich was hailed as “a major new voice in jazz” (All Music Guide) and his music has been described as “transcending borders” (LA Times). Gurvich will celebrate the release of “Kinship,” an album “tapping into folkloric veins or feeling out the spaces between various traditions…. spreading messages of love and oneness through the music” (AllAboutJazz). — Friday, Aug. 25, 8:30 p.m. and Saturday, Aug. 26, 10 p.m., The Stone @ The New School, 55 W. 13th St., thestonenyc.com.

OPERATION FINALE
Playing out more like the a spy novel than a museum show, this multimedia exhibit features recently declassified materials charting the tracking, capture, extradition and trial of Adolf Eichmann — Through Dec. 22, Museum of Jewish Heritage, 36 Battery Place, (646) 437-4202, mjhnyc.org.