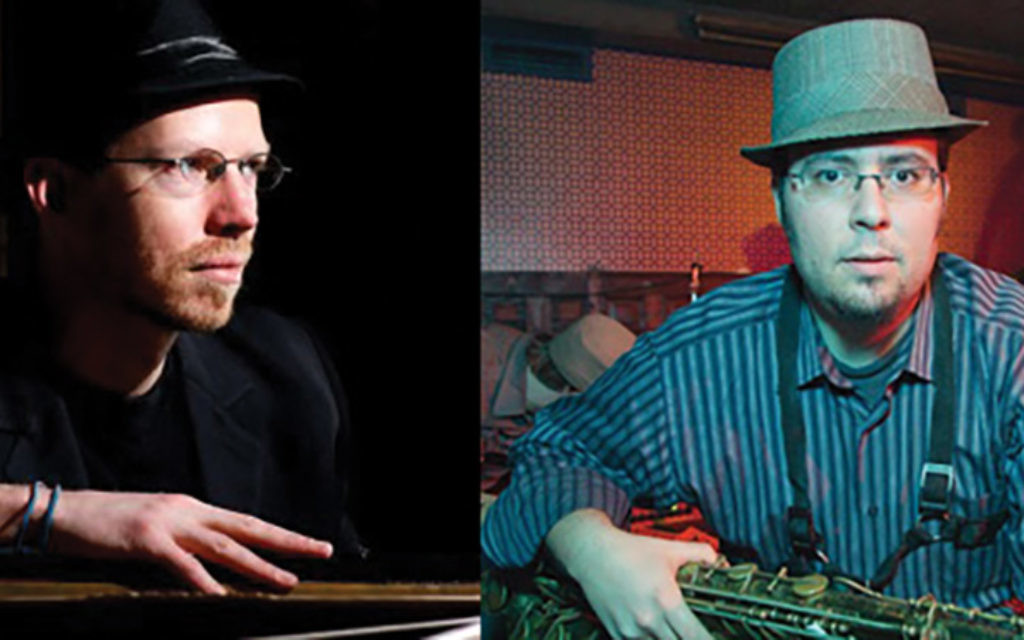 The top music, film, theater and food events in New York City this week, curated by arts and culture editors.

TRAVELING IN PAIRS
Israeli-American jazz pianist Alon Nechustan and polymath Samuel Torjman Thomas join forces in “Traveling in Pairs,” a musical project that gives a jazz-inflicted treatment to a wide range of Jewish music. Thomas, a multi-instrumentalist, composer, bandleader and singer, is also a professor of ethnomusicology and Jewish studies; he’s best known as the leader of the New York Andalus Ensemble, a multi-ethnic outfit performing the traditional music of North Africa and Spain in Hebrew, Arabic and Spanish. Nechushtan has worked with Frank London, Baye Kouyate’s Afro Beat ensemble and Alicia Svigals’ Klezmer Quartet; he’s forged a name for himself as a genre-buster who remains strongly rooted in jazz. — Sunday, Aug. 20, 11 a.m., City Winery, 155 Varick St., (212) 608-0555, citywinery.com. $10.

Israeli-born vocalist and composer Tamuz Nissim can deliver a moody, sultry ballad with real authority, and she can swing as well, with a command of the scatting vocabulary. Nissim’s 2016 debut album, “Liquid Melodies,” a duet with guitarist George Nazos, was hailed as “a combination that works so amazingly well through each [jazz] style that it is stunning” (WTJU.net). The title song, a Nissim original set to a soft Brazilian beat that will bring to mind Astrud Gilberto, asks longingly, “Liquid melodies that we used to sing/ They have lost their sound as we’ve lost our way/ If we’ll call them, ‘Come Back’/ Will they stay?”— Saturday, Aug. 12, 5 p.m., Rockwood Music Hall, 196 Allen St., rockwoodmusichall.com

Created by Zalmen Mlotek and Moishe Rosenfeld in 1984, the musical “Amerike — The Golden Land,” weaves stories and observations the two collected from New York’s Yiddish-speaking immigrants. The National Yiddish Theatre Folksbiene is now reimagining the production, documentary-style, heightened by the use of projection designs and a live seven-piece klezmer band on stage. Directed by Drama Desk-nominee Bryna Wasserman, “Amerike” is performed in Yiddish with Russian and English supertitles. — Through Aug. 20, Museum of Jewish Heritage, 36 Battery Place, (866) 811-4111, mjhnyc.org.

ARI SHAPIRO: HOMEWARD
As a journalist, NPR’s “All Things Considered” host Ari Shapiro has witnessed wars and revolutions. Inspired by his experiences around the world, he takes the stage in “Homeward,” his first solo cabaret performance. Shapiro will sing songs of upheaval, patriotism and hope, from places that are less far away than they seem. — Sunday, Aug. 13, 7:30 and 9:30 p.m., Joe’s Pub, 425 Lafayette St., (212) 539-8778, publictheater.org.

Ethiopian pop/funk, for those not hip to it, is a world-music revelation. Fusing the familiar sounds of American rock, soul, blues and jazz with the utterly foreign pentatonic scales and melismatic vocal delivery of Ethiopian music, the genre has an otherworldly sound married to a powerful, guttural groove. Anbessa Orchestra, a seven-piece group of Israeli-born, New York-based musicians, riffs off Ethiopian hits from the ’60s and ’70s, the so-called “Golden Age” of Ethiopian pop, spicing up the mix with Middle Eastern and Israeli influences. — Friday, Aug. 11, 10 p.m., Barbès, 376 Ninth St., Brooklyn, (347) 422-0248, barbesbrooklyn.com. $10.

Berlin-based Sasha Lurje is one of the most sought-after voices in klezmer music. Belarusian-born composer/clarinetist Zisl Slepovitch is leader of the critically acclaimed Litvakus, a NYC-based band known for its raw, rootsy and energetic performances of Jewish music from Belarus. The two team-up in Goyfriend, a project exploring the Jewish-Slavic-Baltic cultural dialogue through music. — Sunday, Aug. 13, 11 a.m., City Winery, 155 Varick St., (212) 608-0555,  citywinery.com. $10.

The Israeli-born pianist is a former member of bassist Avishai Cohen’s Trio and currently leads his own trio. “Hearing the Shai Maestro trio is like awakening to a new world: a world of wonders, excitement, beauty, and uncertainty,” says All About Jazz. Maestro will perform a solo piano version of originals from his 2014 album, “Untold Stories,” and more. — Monday, Aug. 21, 7:30 and 9:30 p.m., Jazz Gallery, 1160 Broadway, 5th fl., (646) 494-3625, jazzgallery.nyc.

ORLY BENDAVID AND THE MONA DAHLS

When the women’s balcony in an Orthodox synagogue collapses, leaving the rabbi’s wife in a coma and the rabbi in shock, the congregation falls into crisis. Charismatic young Rabbi David appears to be a savior after the accident, but slowly starts pushing his fundamentalist ways. This tests the women’s friendships and creates an almost Lysistrata-type rift between the community’s women and men. — Lincoln Plaza Cinema, 1886 Broadway, (212) 757-0359, lincolnplazacinema.com.

Starring Sabra actress/model/former Miss Israel Gal Gadot, the first A-list Israeli movie star ever, the smash-hit film follows Diana, princess of the Amazons and demi-god, as she grows up on an all-female, all-warrior, all-Israeli-accented island. After a handsome British pilot fighter (Chris Pine) arrives on the island and alerts her to the First World War raging outside, the two rush off to save the world through their combined military prowess. — In very wide release.

Starring a real-life Menashe (the Skverer chasid Menashe Lustig), Joshua Z. Weinstein’s “Menashe” follows the tale of a widower pushing against the conventions of his tight-knit, family-oriented community by trying to win custody of his young son. In his debut feature, Weinstein, a documentarian, shows a real feel for the rhythms and cadences of chasidic life. It’s sweet and sad all at once, and a New York story through and through. —Angelika Film Center, 18 W. Houston St., angelikafilmcenter.com (through Aug.17), and Lincoln Plaza Cinema, 1886 Broadway, lincolnplazacinema.com (through Aug.10).

IN SEARCH OF ISRAELI CUISINE
This tasty, feature-length documentary is a portrait of the Israeli people told through food. More than 70 cultures comprise the Israeli people, each with its own culinary traditions; featured here are profiles of chefs, home cooks, vintners and cheese makers drawn from the Jewish, Arab, Muslim, Christian, Druze and other cultures that make up Israel today. — Sundays through August, 5:30 p.m., Symphony Space, 2537 Broadway, (212) 864-5400, SymphonySpace.org.