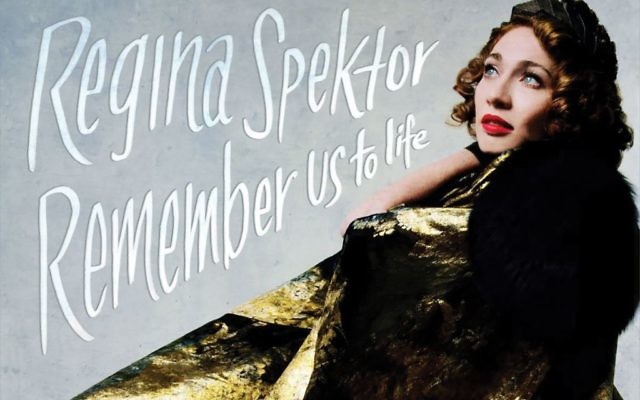 Indie-pop singer/songwriter/pianist Regina Spektor — a Russian-born American Jew — is a genre onto herself. With her bird-like voice, Spektor’s pop-rock ballads offer an eccentric, bittersweet and poetically striking experience, which often leaves listeners both puzzled and moved. Her new record, “Remember Us To Life,” has been hailed by the Huffington Post as “a consistent pleasure—vocally audacious, fun, and when you least expect it, moving.” — Thursday, July 27, 7 p.m., Central Park SummerStage, East 72nd Street and Fifth Avenue, (212) 360-2777, central-park-summerstage.tickets-center.com.

AGING IS OPTIONAL
When you’re timeless, “Aging Is Optional,” so to speak. Jewish theater icon Tovah Feldshuh has had a long and adventurous career, with a Tony nomination for best actress for “Golda’s Balcony,” four Drama Desk Awards, four Outer Circle Critics Awards, the Obie, and the Lucille Lortel Award for Best Actress. Yet she still finds time to show off her zany streak in Scarsdale nightclubs. The winding path of her career (including the Scarsdale gig), and the personal sacrifices she made to sustain it, are among the topics of her 2016 one-woman comic musical, “Aging Is Optional.” – Tuesday and Thursday, Aug. 1 and 3, 7 p.m., 54 Below, 254 W. 54th St., (646) 476-3551, 54below.com. 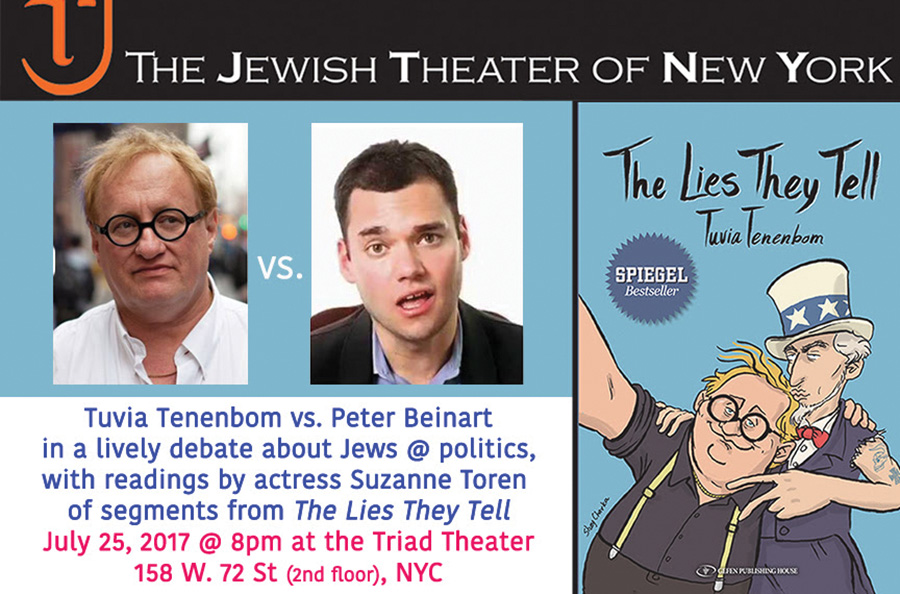 Two engaging Jewish provocateurs, one lefty and one righty, face off to debate the modern Jewish identity. Tuvia Tenenbom is an author, often shocking playwright and founder of the Jewish Theater of New York (the event’s sponsor). In his new book, “The Lies They Tell,” Tenenbom goes to the U.S. Senate, finagles his way into a prison, experiments with drugs on American streets and schmoozes with rednecks to wryly explore the manifestations of anti-Semitism and anti-Israel sentiments in America. Peter Beinart, former New Republic editor, Atlantic contributor and Forward columnist is a whip-smart commentator. He sends his kids to day school, is a leading icon of Liberal Zionism and supports boycotting Israeli settlements. The evening incorporates readings by actress Suzanne Toren of segments from Tenenbom’s “Lies” and a Q&A session with audience participation. — Tuesday, July 25, 8 p.m., The Triad Theater, 158 W. 72nd St. (second floor), (212) 362-2590. Free, with a $20 suggested donation. 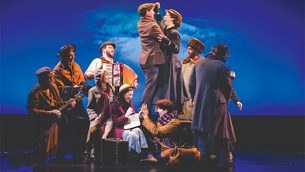 The National Yiddish Theatre Folksbiene’s production of “Amerike – The Golden Land” follows in the Jewish footsteps of “Fiddler on the Roof” and “Indecent.” Courtesy of Folksbiene

Created by Zalmen Mlotek and Moishe Rosenfeld in 1984, the musical “Amerike — The Golden Land” weaves stories and observations the two collected from New York’s Yiddish-speaking immigrants. The National Yiddish Theatre Folksbiene is now reimagining the production, documentary-style, heightened by the use of projection designs and a live seven-piece klezmer band on stage. Directed by Drama Desk-nominee Bryna Wasserman, “Amerike” is performed in Yiddish with Russian and English supertitles. — Extended through Aug. 20, Museum of Jewish Heritage, 36 Battery Place, (866) 811-4111, mjhnyc.org.

Cited as one of the best plays of 2016 by The Times, “Indecent” follows the original cast of Sholem Asch’s “God of Vengeance,” who risked their careers to perform a risqué work at a time when art, freedom and truth were on trial. The work is playwright Paula Vogel’s Broadway debut. Rebecca Taichman, who won a Tony, directs. — Through Aug. 6, Cort Theatre, 138 W. 48th St., telecharge.com.

Guitarist and vocalist Jeremiah Lockwood of The Sway Machinery and vocalist Jewlia Eisenberg, founder of the Balkan funk-punk band Charming Hostess, team up in a new duo project, Book of J (a nod to Harold Bloom’s book on biblical authorship). Drawing from American psalmody, Yiddish folklore and Jewish liturgy, they explore the intersection of religion and radical politics. On tap: songs that started life in Jewish and Christian religious communities and were later adopted by organizers for various racial, economic and social justice causes. — In residence Saturdays in July, 6 p.m., Barbès, 376 Ninth St., Brooklyn, (347) 422-0248, barbesbrooklyn.com. $10.

On the run from Nazis, three Italian Jewish brothers spent months during their childhood hiding in a cave in the Tuscan countryside. Nearly 70 years later, after emigrating to Israel, the three reunite in the country they were forced to abandon and rediscover their hiding place. —  Monday, July 24, 10 p.m., on the PBS documentary series POV.

Considered the harbinger of the post-minimalist movement, Hesse, who died in 1970, is one of America’s foremost female postwar artists. This first feature-length documentary about her life and work makes use of the artist’s journals, her correspondence with close friend and mentor Sol LeWitt and contemporary as well as archival interviews with fellow artists (among them Richard Serra, Robert Mangold and Dan Graham). — Sunday, July 25, 6 p.m., Symphony Space, 2537 Broadway, (212) 864-5400, SymphonySpace.org.

Nearing the age of 50, Anita, Rita, Ricardo and Andrés feel that the school they attend for people with Down syndrome is confining. They long for new challenges, greater independence and more personal space. A special preview from the JCC’s ReelAbilities festival, dedicated to showcasing films by, or about, people with disabilities. — Thursday, July 27, 7 p.m., JCC Manhattan, 334 Amsterdam Ave., jccmanhattan.org. Free. 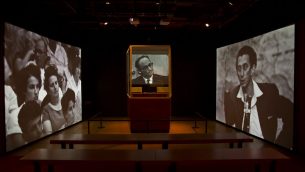 CITY OF GOLD, BRONZE AND LIGHT
In conjunction with the 50th anniversary of the Six-Day War and the reunification of Jerusalem, this new exhibition explores the tensions between imaginary and physical Jerusalem. Combining paintings, drawings, prints, photographs and other media, the exhibit juxtaposes visual and material characterizations of the Holy City from the 17th to 21st centuries with a series of Talmudic, prose and poetic passages. — Through July 30, Yeshiva University Museum, 15 W. 16th St., yumuseum.org.