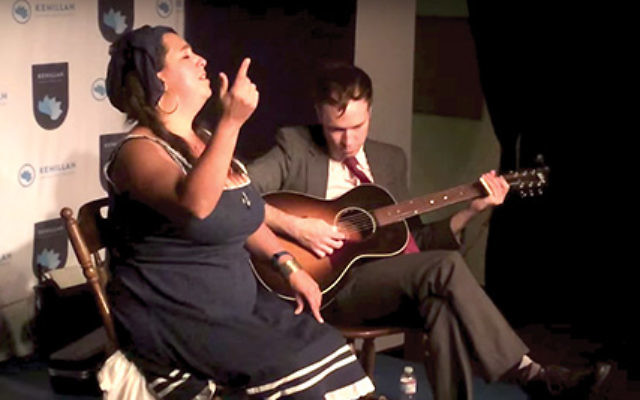 Jewlia Eisenberg and Jeremiah Lockwood team up at Barbes.

Guitarist and vocalist Jeremiah Lockwood of The Sway Machinery has serious Jewish AND blues yichus (he is the grandson of noted Cantor Jacob Konigsberg and he sat at the knee of Piedmont bluesman Carolina Slim). Vocalist Jewlia Eisenberg, founder of the Balkan funk-punk band Charming Hostess, is “blithe and frisky,” says The Times. The two forward thinkers team up in a new duo project, Book of J (a nod to Harold Bloom’s book on biblical authorship). Drawing from American psalmody, Yiddish folklore and Jewish liturgy, the two explore the intersection of religion and radical politics. On tap: songs that started life in Jewish and Christian religious communities and were later adopted by organizers for various racial, economic and social justice causes. — In residence Saturdays in July, 6 p.m., Barbès, 376 Ninth St., Brooklyn, (347) 422-0248, barbesbrooklyn.com. $10.

In conjunction with its retooled production of “Amerike – The Golden Land,” a musical depicting the immigrant experience in New York, the National Yiddish Theatre Folksbiene presents a two-day summit of panels, workshops and performances on the topic of immigration. Participants include the acclaimed Colombian-American actor/comedian/film producer John Leguizamo, who will give the keynote address; journalists Ann Curry and Michael Feingold; Irish-American rock star Larry Kirwan (Black 47); Klezmatics’ trumpeter Frank London and more. The summit culminates with a free outdoor concert at Robert F. Wagner Park (Tuesday, July 18, 7 p.m.) — Monday, July 17, panels start at 10 a.m. and run throughout the day, Museum of Jewish Heritage, 36 Battery Place, (646) 437-4202, mjhnyc.org. For the full schedule, visit nytf.org.

Since his arrival here in 2001, Israeli-born jazz drummer, composer and bandleader Dan Aran, who has a light but insistent touch and leads from behind, has become a sought-after drummer in New York City. All About Jazz described “Breathing,” his debut recording as a leader, as “disarmingly pretty, pure in melodic focus.” Aran is a New School jazz program grad who has a lovely way with brushes. With Itai Kriss on flute and Gilad Abro on bass. — Tuesday, July 11, 8:30 and 10:30 p.m., La Lanterna Bar Next Door, 129 Macdougal St., (212) 529-5945, lalanternacaffe.com.

One of 2016’s best-reviewed works, J. T. Rogers’ “Oslo,” which just won the Tony for best play, tells a complex tale of political intrigue and back-door negotiations focusing on the months of talks between Israel and Palestine that led to the historic 1993 Oslo Peace Accords. Directed by Tony-winning Barlett Sher (“Fiddler on the Roof”). The darkly funny play has been extended through July 16. — Lincoln Center Theater, 150 W. 65th St., (212) 375-3708, lct.org.

Cited as one of the best plays of 2016 by The Times, “Indecent” follows the original cast of Sholem Asch’s “God of Vengeance,” who risked their careers to perform a risqué work at a time when art, freedom and truth were on trial. The work is playwright Paula Vogel’s Broadway debut. Rebecca Taichman, who just won a Tony, directs. — The play has been extended through Aug. 6; discounts through that date, Cort Theatre, 138 W. 48th St., telecharge.com.

Ethiopian pop/funk, for those not hip to it, is a world music revelation. Fusing the familiar sounds of American rock, soul, blues and jazz with the utterly foreign pentatonic scales and melismatic vocal delivery of Ethiopian music, the genre has an otherworldly sound married to a powerful, guttural groove. Anbessa Orchestra, a seven-piece group of Israeli-born, New York-based musicians, riffs off Ethiopian hits from the ’60s and ’70s, the so-called “Golden Age” of Ethiopian pop, spicing up the mix with Middle Eastern and Israeli influences. — Saturday, July 9, 10 p.m., Barbès, 376 Ninth St., Brooklyn, (347) 422-0248, barbesbrooklyn.com. $10.

A MUSICAL JOURNEY THROUGH JERUSALEM

Unexpectedly smashing through the box office’s glass ceiling and carrying women everywhere on her cape-tails, “Wonder Woman” is shaping up to be 2017’s biggest hit. Starring Sabra actress/model/former Miss Israel Gal Gadot, the first A-list Israeli movie star ever, the movie follows Diana, princess of the Amazons and demi-god, as she grows up on an all-female, all-warrior, all-Israeli-accented island. After a handsome British pilot fighter (Chris Pine) arrives on the island and alerts her to the World War (I) raging outside, the two rush off to save the world through their combined military prowess. — In very wide release.

THE MUSES OF BASHEVIS SINGER

Nominated for five 2017 Tony Awards, including Best Revival of a Musical, this Broadway-musical-turned-film takes a poignant and sharply satirical look at the complexities of modern day family life. Originally created under the specter of the AIDS crisis, the story revolves around a neurotic-but-charming gay man named Marvin, his wife, his gay lover, his soon-to-be-bar mitzvahed son, their psychiatrist and the lesbians next door. Recorded live in 2017, Lincoln Center Theater’s production stars Christian Borle (“The Good Wife”), Stephanie J. Block, Andrew Rannells (“Girls”) and Brandon Uranowitz, all of whom received Tony nominations for their performances.  — Wednesday, July 12, 7 p.m., 7 p.m., Sunshine Cinema, 143 E. Houston St., landmarktheatres.com.

Portrait photographer Elsa Dorfman found her medium in 1980: the larger-than-life Polaroid Land 20×24 camera. For the next 35 years she captured the “surfaces” of those who visited her Cambridge, Mass., studio: families, Beat poets, rock stars and Harvard notables. As such pictures begin to fade and her retirement looms, Dorfman gives director Errol Morris an inside tour of her backyard archive. — Angelika Film Center, 18 W. Houston St., (212) 995-2570, angelikafilmcenter.com.

Author of the groundbreaking “Modern English-Yiddish, Yiddish-English Dictionary,” Professor Uriel Weinreich was a key figure in the revival of Yiddish culture here. In an all-Yiddish program in his memory, Yiddish historian Rakhmiel Peltz will discuss Weinreich’s legacy as a cultural bridge between Eastern Europe and America. The lecture is followed by a performance by Inna Barmash, a Vilna-born, N.Y.-based folk singer of Yiddish, Russian and other Eastern European languages; a memorial speech by Yiddish activist Arele Viswanath, Weinreich’s grandson; and a reception. — Sunday, July 9, 1 p.m., YIVO Institute for Jewish Research, 15 W. 16th St., (212) 246-6080, yivo.org. Free.

Within days in June 1967, Jerusalem was transformed from a divided and threatened town into a large, booming metropolis. Dr. Elan Ezrachi, a native of Jerusalem and the author of a new book (in Hebrew) covering the history of Jerusalem since 1967, will speak about the underlying social, political and religious rifts that still shape life and culture in the reunited city. Presented by the Israeli American Council (IAC). — Tuesday, July 11, 7-8:30 p.m., B’nai Jeshurun, 257 W. 88th St., (212) 787-7600, bj.org.

In conjunction with the 50th anniversary of the Six-Day War and the reunification of Jerusalem, this new exhibition explores the tensions between imaginary and physical Jerusalem. Combining paintings, drawings, prints, photographs and other media, the exhibit juxtaposes visual and material characterizations of the Holy City from the 17th to 21st centuries with a series of Talmudic, prose and poetic passages. — Through July 30, Yeshiva University Museum, 15 W. 16th St., yumuseum.org.