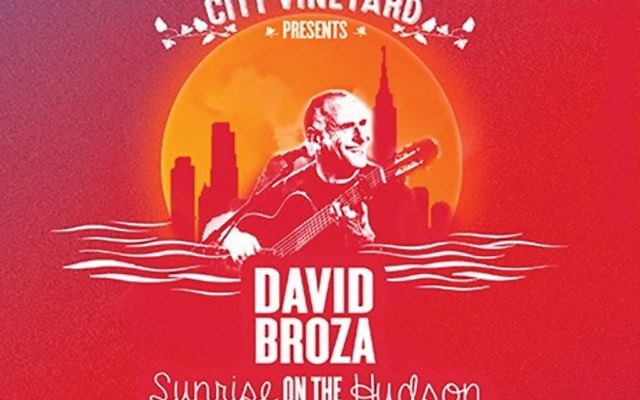 SUNRISE (WITH DAVID BROZA) ON THE HUDSON

Perhaps he’ll put a flamenco spin on Cat Stevens’ “Morning Has Broken” or “Here Comes the Sun.” OK, so it’s not exactly Masada (where he performed at sunrise in a PBS special), but David Broza will enchant just the same with the Hudson at his back, capping an overnight Shavuot celebration. Kicking off just before midnight and continuing into the following morning, the show includes jazz from bassist Yonatan Levy, mariachi from Flor de Toloache, flamenco from Alfonso Cid and Andreas Arnold — and, of course, Broza’s own world music-tinged percussive folk-rock. Lab/Shul Rabbi Amichai Lau-Lavie will share stories and teachings as dawn breaks; a well-deserved breakfast follows. — Tuesday, May 30, 11 p.m.-Wednesday, May 31, 7:30 a.m., City Vineyard at Pier 26, 233 West St., (646) 677-8350, cityvineyardnyc.com. 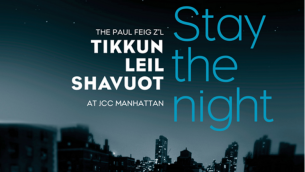 In what’s become a Manhattan Shavuot tradition, New Yorkers flock to the JCC Manhattan to study, watch films, listen to music, dance, practice yoga and, of course, eat cheesecake at “Stay the Night, the Paul Feig z’l Tikkun Leil Shavuot.” The featured event is a half-past-midnight set by the Epichorus ensemble, which will perform its mix of ethereal sounds from India, Egypt, Greece and Syria. Also on tap: a rooftop mikvah with a program on transformation through water; a Jewish Millennials Talk Broadway session with a cast of notable Broadway stars; and discussions on race, ethnicity and social justice with Ambassador Ido Aharoni, Rep. Jerry Nadler and former AJWS president Ruth Messinger. — Tuesday, May 30, 9 p.m. – Wednesday, May 31, 5 a.m., JCC Manhattan, 334 Amsterdam Ave., (646) 505-4444, jccmanhattan.org. Free.

Cited as one of the best plays of 2016 by The Times, “Indecent” follows the original cast of Sholem Asch’s “God of Vengeance,” who risked their careers to perform a risqué work at a time when art, freedom and truth were on trial. The work is playwright Paula Vogel’s Broadway debut. Rebecca Taichman directs. — Through Sept. 10, Cort Theatre, 138 W. 48th St., telecharge.com.

OSLO
One of 2016’s best-reviewed plays, J. T. Rogers’ “Oslo” moves to Broadway. A complex tale of political intrigue and back-door negotiations, this darkly funny play centers on the months of talks between Israel and Palestine that led to the historic 1993 Oslo Peace Accords. Directed by Tony-winning Barlett Sher (“Fiddler on the Roof”). — Through June 18, Lincoln Center Theatre, 150 W. 65th St., (212) 375-3708, lct.org.

Tal Recanati, an American Jewish filmmaker, visited Germany and took a tour entitled “Jewish Berlin.” She was astonished to find that the Germans had dug so deeply and thoughtfully into their past and that 70 years after the Holocaust, there was a growing vibrant Jewish community. Through personal stories from Germans, German Jews, American Jews and Israelis, the film explores Germany’s transformation as a society. — Sunday, May 28, 7 p.m., Leonard Nimoy Thalia at Symphony Space, 2537 Broadway at 95th St., (212) 864-5400, symphonyspace.org. $14/$12 students and seniors/$10 members.

On the Lower East Side, circa 1890, beardless Jewish immigrant Jake (Steven Keats) has assimilated seamlessly into American life. Then his Gitl (Carol Kane) arrives fresh from the Russian shtetl, with their son in tow. Cultures and worlds collide. Sumptuously shot in black and white, Joan Micklin Silver’s loving, funny debut became an unexpected hit, and the rare indie to garner an Oscar nomination. In Yiddish and English. — Tuesday, May 30, 4:30 p.m., Quad Cinema,  34 W. 13th St., (212) 255-2243, quadcinema.com.

ONCE UPON A TIME IN AMERICA

From a 1930s Chinatown opium den going back through the streets of early century ghetto life and forward again to an ominous 1968 Lower East Side, this Proustian epic is the operatic ideal of a Jewish gangster movie. Noodles (Robert De Niro) reminisces about his friendship and rivalry with Max (James Woods) as Leone details inescapable rites of violence and betrayal in this definitive director’s cut. — Wednesday, May 31, 2 p.m., Quad Cinema, 34 W. 13th St., (212) 255-2243, quadcinema.com

Rama Burshtein’s (“Fill the Void”) oddball romantic comedy follows Michal (Noa Kooler) a 32-year-old Orthodox woman preparing for her much-anticipated wedding. When her fiancé abruptly decides to cancel their scheduled wedding, telling her, “I just don’t love you,’ she decides that she will proceed without him. Kooler won an Ophir (the Israeli Oscar) for her performance. — Quad Cinema, 34 W. 13th St., (212) 255-2243, quadcinema.com.

Based on a true story, this film by acclaimed Israeli director Avi Nesher tracks the voyage through Europe of two Israeli sisters, daughters of Holocaust survivors, who are bent on delving into a taboo topic: the mystery of how their father survived in Poland during World War II. Variety called the film “profoundly moving … [Nesher’s] best film yet.” — Opens on Friday, June 2, Sunshine Cinema, 143 E. Houston St. (bet. First and Second avenues), landmarktheatres.com.

Hailed for her “simplicity and warmth” (All About Jazz), the New York-based, Israeli-born jazz/folk guitarist and vocalist writes and performs playfully sexy and intelligent vocal and guitar standards. With Israeli-American Or Bareket on bass and Andrew Millar on drums. — Monday, June 5, 8:30 and 10:30 p.m., La Lanterna Bar Next Door, 129 Macdougal St., (212) 529-5945, lalanternacaffe.com.

CITY OF GOLD, BRONZE AND LIGHT
Timed to the 50th anniversary of the Six-Day War and the reunification of Jerusalem, this new exhibition explores the tensions between imaginary and physical Jerusalem. Combing paintings, drawings, prints, photographs and other media, the exhibit juxtaposes visual and material characterizations of the Holy City from the 17th to 21st centuries with a series of Talmudic teachings, prose and poetic passages. — Through July 30, Yeshiva University Museum, 15 W. 16th St., yumuseum.org.