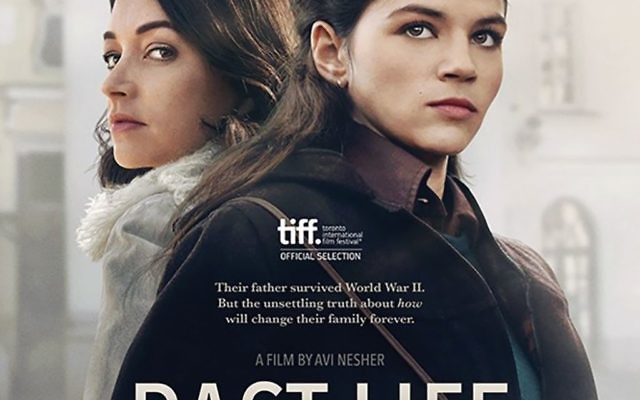 Poster for “Past Life,” part of the Israel Film Center Festival. Courtesy

ISRAEL FILM CENTER PRE-FESTIVAL SCREENINGS
Showcasing some of the most interesting new films to come out of Israel, JCC Manhattan’s 5th Annual Israel Film Center Festival runs June 8-13. But you don’t have to wait until then to get started. Nominated for five Israeli Academy Awards (the Ophir Awards), Shlomit Nehama and Emil Ben-Shimon’s “The Women’s Balcony” (Yismach Chatani) screens on Sunday, May 21, 8 p.m., followed by a festival kickoff party; Avi Nesher’s highly touted “Past Life” follows on Tuesday, May 23, 7:30 p.m. “Balcony,” a “warm culture-clash comedy” (L.A. Times) that provides a timely warning about the rise both of religious fundamentalism and the misogyny it often entails, follows the fracturing of a close-knit Sephardic congregation along gender lines; the action takes place after the collapse of the women’s balcony in its synagogue opens the way for a new charedi rabbi to take over.

Based on a true story, “Past Life” tracks the trans-European voyage of two Israeli sisters who attempt to uncover the startling truth about how exactly their father survived the Holocaust.

Both films will be released soon in theaters here. — For tickets and more listings, visit jccmanhattan.org/film/israel-film-center-festival. (See column on the festival, page 50.)

The late set features innovative baritone saxophonist Eden Bareket — “a wonderfully-gifted technician with a beautiful sound on his instrument” (All About Jazz) — who leads his trio, with brother Or Bareket on bass and Felix Lecaros on drums. — Tuesday, May 23 (two sets: Borochov, 8 p.m.; Bareket, 9:30 p.m.), Cornelia Street Café, 29 Cornelia St., (212) 989-9319, corneliastreetcafe.com. $20, drinks included.

TWO BY TABORI
George Tabori, one of the most darkly satirical playwrights of the mid-to-late 20th century, is receiving a timely reappraisal. “Mein Kampf” imagines a young Adolf Hitler as a gawky art student kicking around dejectedly until he meets a Jewish Bible salesman who suggests he go into politics. “Jubilee” follows a neo-Nazi youth who goes about defacing Jewish headstones, until he’s visited by a Jewish family and a gay couple who find deliciously sinister ways to goad him to move on. — Through Sunday, May 21, Theater for the New City, 155 First Ave., 212/868-4444, taboriproject.org. $18.

Cited as one of the best plays of 2016 by The Times, “Indecent” follows the original cast of Sholem Asch’s “God of Vengeance,” who risked their careers to perform a risqué work at a time when art, freedom and truth were on trial. Created by playwrights Paula Vogel and Rebecca Taichman, and directed by Taichman, the show “reminds us of the power of art to tell us truths long before we are able to recognize them as such,” says the L.A. Times. — Through Sept. 10, Cort Theatre, 138 W. 48th St., telecharge.com.

One of 2016’s best-reviewed plays, J. T. Rogers’ “Oslo” moves to Broadway. A complex tale of political intrigue and back-door negotiations, this darkly funny play centers on the months of talks between Israel and Palestine that led to the historic 1993 Oslo Peace Accords. Directed by Tony-winning Barlett Sher (“Fiddler on the Roof”). — Through June 18, Lincoln Center Theatre, 150 W. 65th St., (212) 375-3708, lct.org.

SING JERUSALEM’S PRAISES
In Honor of Jerusalem Day (May 23), the Zamir Choral Foundation features five centuries of music inspired by the holy city. Two world premieres are on tap: David Burger’s “Shab’chi Yerushalayim” (Praise Ye, Jerusalem) and Steve Cohen’s “Al Rosh Simchati” (Above My Chiefest Joy), a musical dialogue between Psalms 122 and 137. Randy Klein’s “Fanfare for Jerusalem” will receive a second hearing since its recent premiere at the Metropolitan Opera. And the Zamir Chorale, the high school choir HaZamir and Zamir Noded will perform under the direction of Maestro Matthew Lazar. — Sunday, May 21, 3 p.m., Jazz at Lincoln Center’s Frederick P. Rose Hall, 10 Columbus Circle, (212) 721-6500, jazz.org.

Israeli-born, New York-based Pianist Yaniv Taubenhouse, bassist Rick Rosato and drummer Jerad Lippi perform excerpts from “Moments in Trio – Volume One,” the first in a series of contemporary jazz recordings by the trio, released on Fresh Sound Records in September 2015. Taubenhouse “possesses a rare gift as a musician and pianist,” said NPR, “the combination of virtuosity, curiosity along with the courage to use his art as a vehicle to bring his joy and pain to the surface.”— Monday, May 22, 8:30 p.m., Cornelia Street Café, 29 Cornelia St., (212) 989-9319, corneliastreetcafe.com. $10 cover plus $10 Food/Drink minimum.

KLEZMOGRAPHERS
For the past decade, Eleonore Biezunski (violin, vocals) and Pete Rushefsky (tsimbl) have been exploring a repertoire of rare 19th- and early-20th century Jewish folklore, as well as playing original klezmer tunes. They will be joined by Zhenya Lopatnik, a singer who has specialized in the Yiddish repertoire of her native Ukraine. —  Tuesday, May 23, 7 p.m., Barbès, 376 Ninth St., Brooklyn, (347) 422-0248, barbesbrooklyn.com. $10.

YIDDISH CELLULOID CLOSET AND THE ISLE OF KLEZBOS
Despite the taboo surrounding homosexuality in the early 20th century, Yiddish cinema did make forays into the topic. See a collection of relevant film clips, plus Isle of Klezbos’ reinterpretations of movie music from vintage soundtracks, including classics and lesser-known gems. — Wednesday, May 24, 7 p.m., Center for Jewish History, 15 W. 16th St., (212) 294-8301, cjh.org. $36 at door/$25 online/$15 seniors, students and members.

THE WOMEN’S BALCONY
When the women’s balcony in an Orthodox synagogue collapses, leaving the rabbi’s wife in a coma and the rabbi in shock, the congregation falls into crisis. Charismatic young Rabbi David appears to be a savior after the accident, but slowly starts pushing his fundamentalist ways. This tests the women’s friendships and creates an almost Lysistrata-type rift between the community’s women and men. — Lincoln Plaza Cinema, 1886 Broadway, (212) 757-0359, lincolnplazacinema.com.

Rama Burshtein’s (“Fill the Void”) oddball romantic comedy follows Michal (Noa Kooler), a 32-year-old Orthodox woman, preparing for her much-anticipated wedding. When her fiancé abruptly decides to cancel their scheduled wedding, telling her, “I just don’t love you,” she decides that she will proceed without him. She hires a hall, plans a menu and sends invitations. Now all she needs, with 22 days left before her chosen date, is a bridegroom. Lead actress Noa Kooler won an Ophir (the Israeli version of the Oscar) for her performance. — Lincoln Plaza Cinema, 1886 Broadway, (212) 757-0359, lincolnplazacinema.com.

STEFAN ZWEIG: FAREWELL TO EUROPE
Stefan Zweig was one of the most famous writers of his time, but as a Jewish intellectual he struggled to find the right stance towards the events in Nazi Germany. Driven to emigrate to South America at the peak of his worldwide fame, Zweig fell into despair at the sight of Europe’s downfall. This film explores what it means to be a refugee, and mechanisms behind the difficult decision to speak out or remain silent in the face of tyranny. — Lincoln Plaza Cinema, 1886 Broadway, (212) 757-0359, lincolnplazacinema.com.

Tal Recanati, an American Jewish filmmaker, visited Germany and took a tour entitled “Jewish Berlin”; She was astonished to find that the Germans had dug so deeply and thoughtfully into their past, and that in the 70 years since the Holocaust, there was a growing vibrant Jewish community. Through personal stories from Germans, “German-Jews,” American-Jews and Israelis, Germans and Jews explores Germany’s transformation as a society. — Sunday, May 21, 7:30 p.m., Leonard Nimoy Thalia at Symphony Space, 2537 Broadway at 95th St., (212) 864-5400, symphonyspace.org. $25.

Watch the premiere of Episode 4, “The Dates,” of “Soon By You,” an award-winning comedic web series about six young Modern Orthodox Jews dating in New York City. Screening followed by Q&A with cast and crew and an after-party. Refreshments served. — Wednesday, May 24, 8 p.m., JCC Manhattan, 334 Amsterdam Ave., (646) 505-4444. jccmanhattan.org.  $30.

MEMOIRS OF A REFORMED AMERICAN SKINHEAD

Author Christian Picciolini, son of hard-working Italian immigrants, describes his transformation from a lonely 14-year-old boy to the 16-year-old leader of the Chicago-area skinheads — and his subsequent escape from the movement six years later. With Abraham Foxman. — Wednesday, May 24, 7 p.m., Museum of Jewish Heritage, 36 Battery Place, mjhnyc.org. $15 general/$12 member.

CRIME OF COMPLICITY
Law Professor Amos Guiora uses his family’s experiences in the Holocaust to delve into the legal culpability and moral responsibility of the bystander, attempting to determine whether there can and should be legal liability in deciding not to act to aid another person in distress. With Rabbi Peter Rubinstein, Guiora will sign copies of his new book “The Crime of Complicity: The Bystander in the Holocaust” following the event. — Monday, May 22, 7 p.m., 92nd Street Y, 1395 Lexington Ave., 92y.org. $32.

OF WOMEN AND MIRRORS
Through her writing and teaching of biblical commentary on the books of the Torah, Dr. Avivah Gottlieb Zornberg has gained a significant reputation. She has lectured and taught internationally, appeared on PBS and published four books. Her newest is “Bewilderments: Reflections on the Book of Numbers.” Zornberg will speak about the psychological conundrums of the Exodus story, analyzing them through a midrash about women and mirrors.  — Tuesday, May 23, 7 p.m., Temple Emanu-El Streicker Center, One E. 65th St., (212) 507-9580, emanuelskirballnyc.org 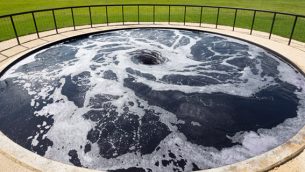 FLORINE STETTHEIMER: PAINTING POETRY
Through her critically acclaimed poems, paintings and drawings, as well as a selection of costume and theater designs, photographs and ephemera, the Jewish Museum will offer a timely reconsideration of poet/painter Florine Stettheimer, an icon of Jazz Age New York. – Through Sept. 24, The Jewish Museum, 1109 Fifth Ave., (212) 423-3200, thejewishmuseum.org