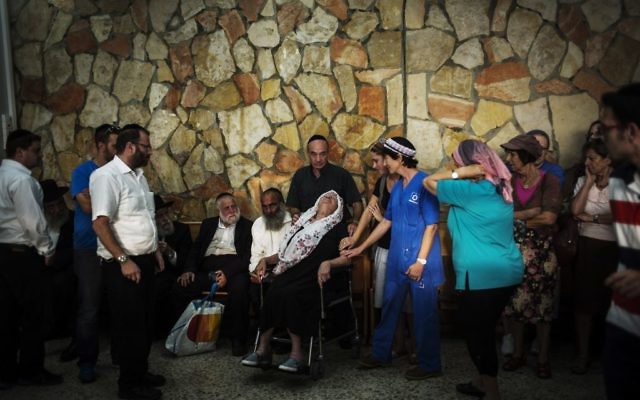 When the Beersheva bus station became a murder scene on Sunday, the man firing the gun wasn’t a Palestinian from the West Bank, Gaza or Jerusalem; he was reportedly an Israeli citizen who lived just 20 minutes away.

Muhand al-Okabi was also a member of Israel’s Bedouin minority, which is by no means a natural player in the Palestinian “struggle,” and which even sends some of its young men to the Israeli army.

Here in Israel, people make assumptions about security to allow themselves to feel safe. The latest phase of terrorism has undermined virtually all of these, leaving people feeling that terror can come from the least expected sources.

Even age is no barrier. It was a 13-year-old Palestinian, together with his 15-year-old cousin, who allegedly stabbed two Israelis in Jerusalem on Oct. 12.

Most unsettling for people is the fact that the terror is driven by residents of East Jerusalem — people who are Palestinians, but who have Israeli residency and identification cards, and who can in normal circumstances travel freely in Israel.

I stood in Jerusalem’s central bus station just after one of the attacks in the city, and had a haunting conversation with a 22-year-old east Jerusalem Arab, a polite young man who interacts with Jewish Israelis all day long, working on a kibbutz. “There’s no way apart from this,” he said, referring to the attacks.

He tells me about the stone-throwing attacks against Israeli forces that he has participated in — though he says that he has recently stopped taking part. “We start by lighting a fire and throwing stones on to the road, and them the police comes with six or seven vehicles. and they throw [tear] gas. We throw stones and they shoot ammunition and we start Molotov cocktails.” Why do young Palestinians from his village go through this routine? “To make problems.”

The sowing of fear by Palestinian leaders and media is so intense that he has come to regard Jerusalem as a dangerous city for Arabs, where Israeli border police lurk behind lampposts ready to arbitrarily attack Arabs and then frame them as attackers. He has decided that in this environment, carrying knives can make sense for Arabs. “If I take a knife I’m not scared,” he said, insisting that some reported attacks are actually instances of Palestinians defending themselves after provocation.

One point where the young man will have surprised many was when I asked him about statehood. Is that his aim? Is his anger motivated by the lack of statehood? He gave a shrug. This young man, like most of those perpetrating the attacks, has grown up in the limbo years since the Oslo peace process faded. Statehood has always been something that politicians have discussed, but this isn’t the issue that evokes their passions.

And this is why the current violence is so scary; because it is fueled by a general rage against Israel that changes its focus, but isn’t centered around anything so graspable as the cause of political independence. Young Palestinians can be told that Al-Aqsa is “in danger,” that Israel is erasing their history, they should be terrified in Israel, and any number of other claims that snowball in to a general sense of rage.

Today, 57 percent of Palestinians back a return to armed intifada (in the absence of peace talks) according to a poll by the independent Palestinian Center for Policy and Survey Research (PCPSR). But tellingly, only 48 percent of people believe that the “first most vital Palestinian goal” should be to end Israel’s presence in areas that it captured in 1967 and build a Palestinian state in the West Bank and the Gaza Strip with east Jerusalem as its capital. In other words, there are more cheerleaders for terror than there are for Palestinian statehood.

The widespread assumption that all terror can be simply understood as agitation for Palestinian statehood is far too simplistic. The current reality challenges both those who say that negotiations will cure all, and the opposing camp that says that the conflict is so deeply entrenched that force is the only answer.

Israel can do more to manage some of the factors aside from statehood that play in to the violence (it goes without saying that Palestinian leaders should be reigning in violence). On the libelous claims that it is putting the Al-Aqsa Mosque “in danger,” it can give louder and clearer reassurances that it isn’t. Instead of saying that the “status quo” will be maintained, have Israeli leaders say clearly and repeatedly that it will continue to operate as a Muslim holy site with no changes whatsoever planned. Israel should engage PR companies to get the message out.

At the same time, Israel needs to manage the right-wing Jewish fringe that appears to want to inflame tensions on Temple Mount, by trying to break the rules and start prayers on the mount. This feeds the Palestinian libel. The government has acted sensibly by barring Knesset members from going on the mount. It should continue to ensure access for Jewish visitors, but it should reduce the size of the groups allowed up at one time, creating a dynamic where acts of nationalistic bravado are less likely.

Negotiations, while not the magic solution that many conceive, would be a wise path — perhaps negotiations on certain limited issues instead of a full attempt at a “final-status” agreement. Some of the Palestinian anger being witnessed at the moment is displaced anger. Some 80 percent of Palestinians say that the Arab world “is too preoccupied with its own concerns, internal conflicts, and the conflict with Iran and that Palestine is no longer the Arab’s principal or primary issue or cause,” according to the PCPSR poll. It is no coincidence that, a little over a year since the Gaza confrontation ended and Palestinian concerns became eclipsed by numerous other stories from the Arab world, and as this feeling of being sidelined is so strong, that Palestinian leaders should incite and Palestinian violence should erupt. If the Palestinians want to get off the sidelines and in to the spotlight, best that they do it through a round of negotiations rather than by spilling more Jewish blood.