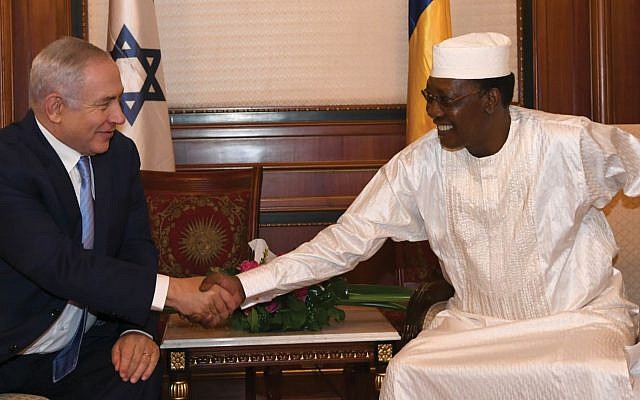 Israel has a new alliance — and to the delight of diplomats, it is with a Muslim country.

Prime Minister Benjamin Netanyahu went to Chad, in Africa, this week, and officially restarted relations that were severed in the 1970s.

It’s a story that has far broader significance than this single country — a state that, as seventh poorest in the world, has limited power. “Israel can now say, ‘some of our best friends are Muslims,’” said Moshe Maoz, an expert on Israel’s relationship with Islamic countries.

The Hebrew University professor views this as the kind of development that helps break the taboo on other Muslim countries, especially those in Africa close to Chad, engaging with Israel.

Netanyahu has visited Africa four times in four years, and he’s a man on a mission, namely to build bridges. Since he left Chad, he has enjoyed two more breakthroughs, one of them before he even got home.

His plane back to Israel was routed over South Sudan. Despite being independent, South Sudan’s airspace is controlled by Sudan, a Muslim country that was, until three years ago, seen as Iran’s lapdog.

The permission of its air traffic controllers was laden with significance. There is now speculation that the move could indicate that Sudan is mulling a radical rethink on its attitude towards Israel.

This is the second aviation gesture from a Muslim country in eight months. When Saudi Arabia allowed Israel-bound planes to fly through its airspace in May, it was viewed as a strong signal Riyadh is softening its stance on Israel.

Just after Netanyahu returned to Israel, reports surfaced suggesting that he will soon host the leader of another Muslim African country, Mali. Soumeylou Boubèye Maïga is expected to visit in the next few weeks, despite the fact that, like Chad, his country cut ties with Israel in the ’70s.

All of this comes on the heels of a Netanyahu trip to Oman, and a trip by his colleague Miri Regev, the culture minister, to the United Arab Emirates.

Netanyahu is putting the Muslim identity of these countries front and center. “It’s significant for us that Chad is a country with a Muslim majority that seeks the friendship of Israel,” Netanyahu said in Chad, standing alongside President Idriss Deby, whom he hosted in Israel in the fall. Earlier, he billed his trip as “part of the revolution that we are doing in the Arab and Islamic worlds,” and promised that other countries will follow Chad.

This is an ongoing project for Netanyahu, but there is speculation that the timing of this week’s trio of developments may have been arranged to give him an election boost. With a headache over the Syria border (Israel this week attacked Iranian targets in Lebanon) and the possibility of indictment for corruption looming, this story, which casts Netanyahu as a statesman who unlocks doors, is expected to be good for his popularity.

In Chad, Netanyahu tried to suggest that as well as both countries gaining from relations, there is cultural common ground to be explored.

“I learned today about the fate of African fighters, soldiers, in World War II, prisoners of war who were murdered by the Nazis, specifically because they were black,” Netanyahu said. “This is a story that has to be told. You suffered because you were black; we suffered because we were Jews.”

The story regarding the building of bridges to the likes of Saudi Arabia and the United Arab Emirates relates to a variety of strategic considerations. When it comes to the African countries, their thought process can be summed up as: why not?

The idea of Muslim African countries deferring to the “Arab world” has recently gone out of date, said Jonathan Rynhold, an analyst on Israel’s foreign policy from Bar Ilan University. “The ‘Arab world’ doesn’t exist diplomatically; it’s divided and it’s weak,” he said. “The Saudis are making moves towards Israel, and the powers that do care about rejecting Israel just don’t have the leverage.

“Iran and Hamas and the Palestinian Authority,” Rynhold continued, “can scream and shout, but they don’t have what these countries want, and they don’t have [the] capability to harm them if they connect with Israel.”

Today, after such a long stagnation in the Israeli-Palestinian peace process, African countries no longer feel that they need to give Israel the cold shoulder until the Palestinian issue is settled, said Rynhold. “The Palestinian issue is no longer a block on development of relationships within the Third World and Muslim states, which it was since the Yom Kippur War. The politics has changed dramatically.”

He noted that Israel started intensely pushing relations with African states three years ago, after deciding that great investment could be put into relationships with European countries for small changes in attitudes, while with African countries, big changes are possible. What makes Israel confident, Rynhold suggested, is tech.

Maoz thinks that one of David Ben-Gurion’s hopes for Israel, from many years ago, may be coming to fruition. “Back in the ’50s, Ben-Gurion wanted to reach out to African countries. What we are seeing now is a more extensive and better version of this push.”