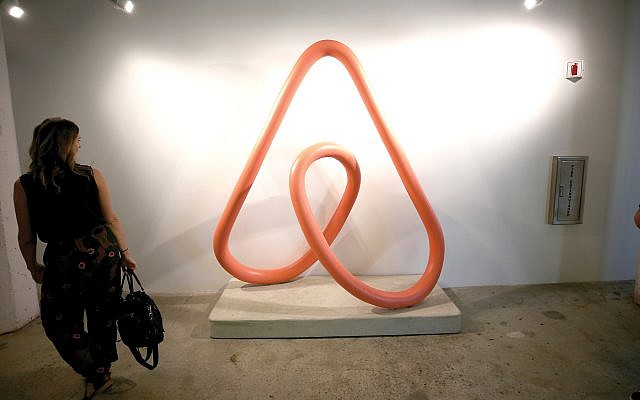 JTA – The guesthouse, advertised as “Tranquility of the Valley,” boasts a hot tub, a patio that faces west toward the setting sun and picturesque views of farmland and hills. It’s available at $134 per night on Airbnb. For now.

That will change soon as this rental listing, along with some 200 others, will be removed from Airbnb, the short-term apartment rental website. After two years of protests from pro-Palestinian activists, the company announced last Monday that it will be taking down all of its listings in Israeli West Bank settlements.

But Moriya Shapira, who owns the northern West Bank guesthouse in the settlement of Shiloh, isn’t too worried about money. While she knows she will lose business, Shapira hopes to make it up by advertising on other websites and networks popular with Israeli tourists looking for a getaway.

What concerns her is the ideological blow that she says settlers like her have suffered at the hands of a tech company with lofty ideals.

“When we registered to Airbnb, they wrote ‘it’s a community of all the world, everyone hosts each other, everyone loves each other,’” Shapira told JTA. “And suddenly they’re saying ‘no, you cannot host, you are not part of it.’” 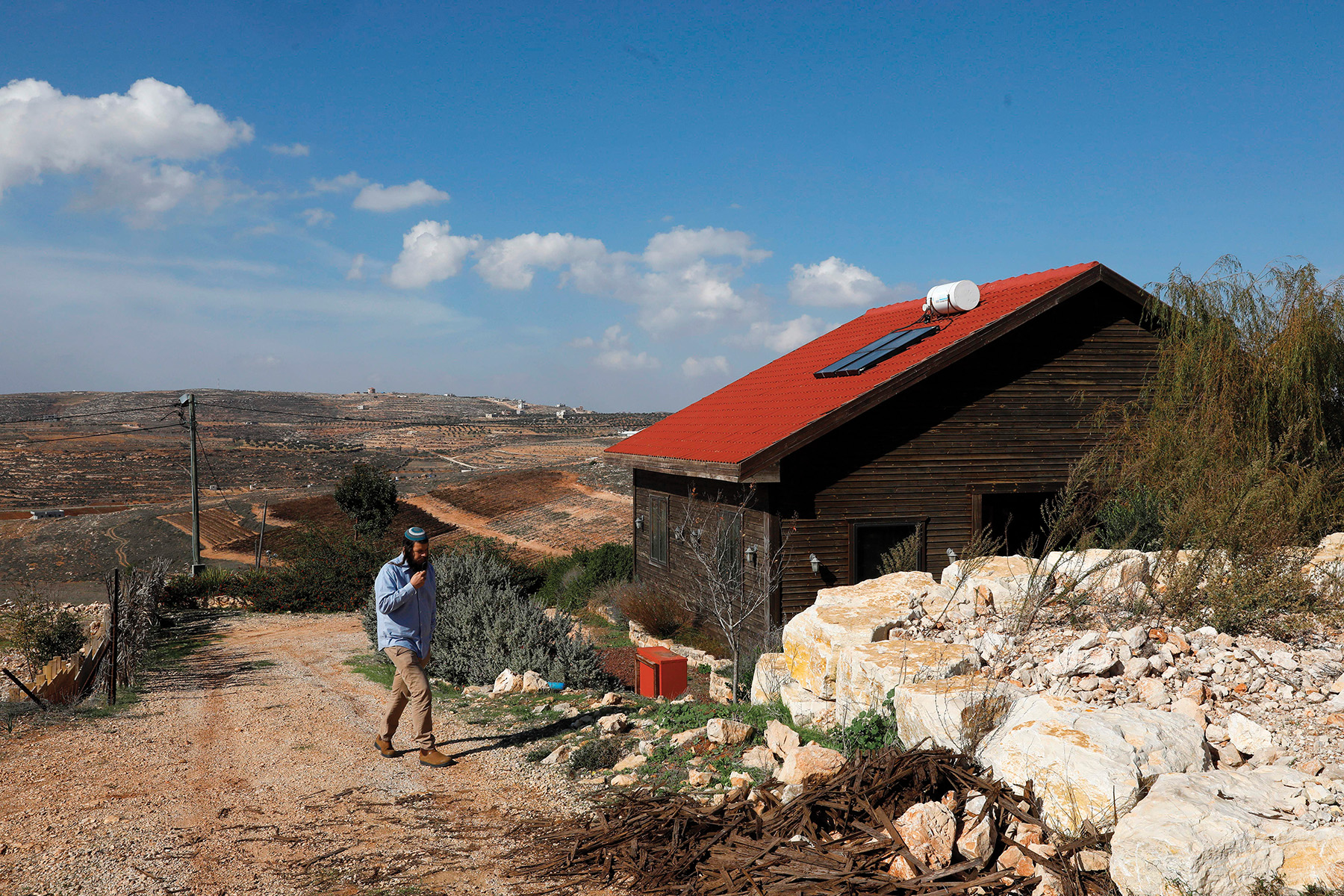 Nati Rom, founder of the anti-Israel boycott organization Lev Haolam, walks next to an Airbnb apartment located in an outpost near the West Bank Jewish settlement of Shiloh. Menahem Kahana/AFP/Getty Images

Airbnb’s decision will impact the modest business of settlement tourism, but stakeholders across the ideological spectrum cast the debate mostly in ideological terms. For the movement seeking to end Israel’s occupation of the West Bank, and for those who want to boycott settlements or Israel as a whole, the decision is a significant victory. For the Israeli government and other supporters of settlements, it’s a call to arms.

“We found that the settlement enterprise involves severe violations of human rights,” said Omar Shakir, Israel and Palestine director for Human Rights Watch, which has been asking Airbnb to remove the settlement listings since 2016. “There’s no way a business can operate in a settlement without contributing to serious human rights abuse.”

When protests against Airbnb’s settlement listings began in 2016, the company did not take action against the rentals. Along with Human Rights Watch, a campaign under the name Airbnb: Say No to Stolen Homes pushed Airbnb to remove the settlement listings through public protests and a petition delivered to its offices in San Francisco.

“We would come out, and we have video of them very graciously taking the petition in San Francisco, and we did try to contact them and talk to them directly,” said Granate Kim, communications director for Jewish Voice for Peace, a group that backs the Boycott, Divestment and Sanctions movement targeting Israel, and part of the Stolen Homes coalition. “But that isn’t something they were interested in doing at a higher-up level with us.”

The statement Airbnb released acknowledges that the Israeli-Palestinian conflict is a contentious issue and says the company consulted with experts on the conflict. The statement names a couple of concerns with the listings in settlements, including that critics say “companies should not profit on lands where people have been displaced” and that listings in settlements may be “contributing to existing human suffering.” 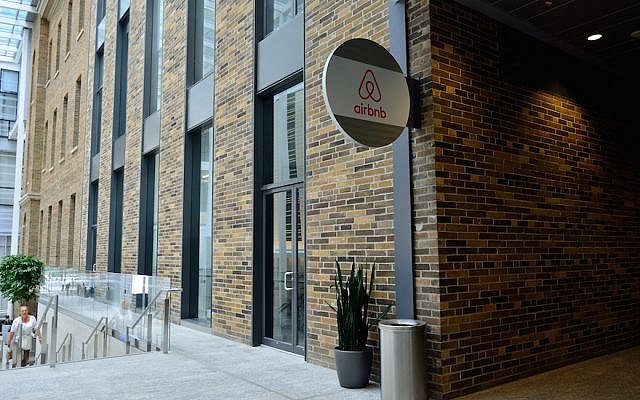 “We concluded that we should remove listings in Israeli settlements in the occupied West Bank that are at the core of the dispute between Israelis and Palestinians,” the statement said. “Our hope is that someday sooner rather than later, a framework is put in place where the entire global community is aligned so there will be a resolution to this historic conflict and a clear path forward for everybody to follow.”

An Airbnb spokesperson did not respond to follow-up questions regarding the company’s specific concerns with rentals in settlements. JTA has learned that the company will next be investigating whether it should remove its listings in Western Sahara, which is controlled by Morocco.

The Israeli government has protested the move, with Strategic Affairs Minister Gilad Erdan calling for a boycott of Airbnb in response.

“Airbnb’s decision simply harms the Palestinians, ruins employment opportunities for both sides in Judea and Samaria, and destroys the chances for peace and coexistence,” Erdan said. “We call on all supporters of Israel around the world to stop working with Airbnb. There are enough competitors, we do not need them.”

Lawyers filed a class-action lawsuit last Thursday in Israel against Airbnb, accusing the company of “outrageous discrimination. The suit was launched by Ma’anit Rabinovich, who rents guest rooms in the West Bank settlement of Kida. The suit, filed in Jerusalem District Court is also seeking monetary damages. Also, the Beverly Hills, Calif., City Council on Sunday unanimously passed a resolution condemning Airbnb for removing listings of rentals in Israeli settlements and is urging a boycott of the company.

Israel advocates have also criticized Airbnb for singling out Israel amid a world of geopolitical conflicts and allegations of human rights abuses.

“Airbnb has not de-listed rentals in any other disputed areas,” Jonathan Greenblatt, the national director of the Anti-Defamation League, wrote in an open letter to Airbnb CEO Brian Chesky. “Yet only Israeli settlements are being singled out for de-listing by Airbnb, a decision which many see as a double standard set by your company.”

Before this week, Airbnb appeared to have a positive relationship with Israel and its supporters. In 2015, Tel Aviv partnered with Airbnb to create an interactive guide to the city, the first such partnership that Airbnb had formed. In 2016, partly due to multiple allegations that Airbnb hosts in Europe refused to rent to Israelis, the company added a non-discrimination clause for hosts.

Saeb Erekat, a senior Palestinian negotiator, called the decision an “initial positive step” and hoped it would be expanded to eastern Jerusalem, which the Palestinian Authority claims as its capital. Husam Zomlot, a Palestinian diplomat, had previously told the Guardian that Airbnb’s settlement listings were “illegal and criminal” and that “[t]here will come a time when companies like this, who profit from the occupation, will be taken to court.”

A report released last week by Human Rights Watch says settlements are uniquely bad because they are illegal under international law (Israel disputes this), some are built on seized Palestinian land and Palestinians who live in the West Bank are not allowed access to them. Shakir said this is the first territory in which his organization has called on Airbnb to remove listings.

Israelis are regularly prohibited from entering several Middle Eastern countries where Airbnb listings are still accepted. But Shakir said the comparison is faulty: Palestinians being prohibited from West Bank settlements are not foreigners but live in the same territory.

“It’s the only place in the world where a person who lives somewhere cannot enter based on their ethnicity or national origin,” he said. “If there were another country where those things are found, we’d be all for Airbnb having a similar policy, but we haven’t found that.”

It’s unclear whether this decision will help or hurt Airbnb’s bottom line, said Pam Scholder Ellen, an associate professor of marketing at Georgia State University. Because people hold passionate opinions on both sides of the issue, she said, Airbnb would anger one side and please another whether it kept or removed the settlement listings. She added that because the international community considers settlements illegal, it’s possible that Airbnb saw them as a legal liability.

“It is becoming increasingly common for companies to take stances on political issues, particularly since the last election,” Ellen said. “A lot of the companies that are doing this are run by much younger founders and they are more likely to be politically active.”

Tamar Asraf, a spokeswoman for the Binyamin Regional Council, which governs settlements in the central West Bank, also said that she didn’t think Airbnb’s decision would hurt tourism there. In the days since the statement, Asraf said, she has received messages from people in Israel and abroad who want to visit in order to make a statement.

“We’re already seeing this: People are picking up the phone and saying we want to come,” she said. “Not necessarily people who are naturally supportive of settlements, but they’re very much against boycotts.”