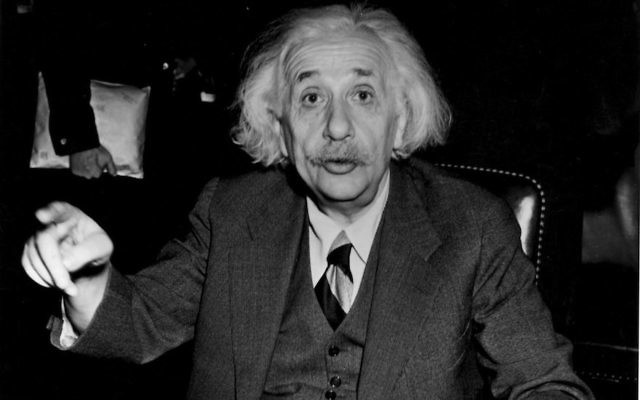 JERUSALEM (JTA) — Albert Einstein writes about science and concern over the rise of the Nazis in Germany in 110 new manuscript pages made public, for the first time, at the Hebrew University of Jerusalem.

The manuscripts include missing computations from Einstein’s Unified Theory, letters to his son about what is happening in Germany, letters to his friend and fellow scientist Michele Besso, and sheets containing four years of mathematical derivations.

The manuscripts were released Tuesday to mark the 140th anniversary of Einstein’s birth.

Einstein and Besso in their letters discussed science, but also wrote about personal matters such as their families and Jewish identity.

“As a goy, you’re not obligated to study the language of our forefathers, while I, as a ‘Jewish saint,’ should be embarrassed at the fact that I know almost nothing. But I prefer to be embarrassed rather than learning it,” Einstein wrote in German in a letter to Besso, who had converted to Christianity, about the Hebrew language.

In another letter to Besso, Einstein writes that after 50 years of thinking about it, he still does not understand the quantum nature of light.

In a 1935 letter to his son Hans Albert, who was living in Switzerland, Einstein wrote that “I read with some apprehension that there is quite a movement in Switzerland, instigated by the German bandits. But I believe that even in Germany things are slowly starting to change. Let’s just hope we won’t have a Europe war first …”

The new manuscripts were purchased from a private collector in Chapel Hill, North Carolina, for Hebrew University’s Albert Einstein Archives by the Crown-Goodman Family Foundation in Chicago. The archives contain more than 80,000 items.