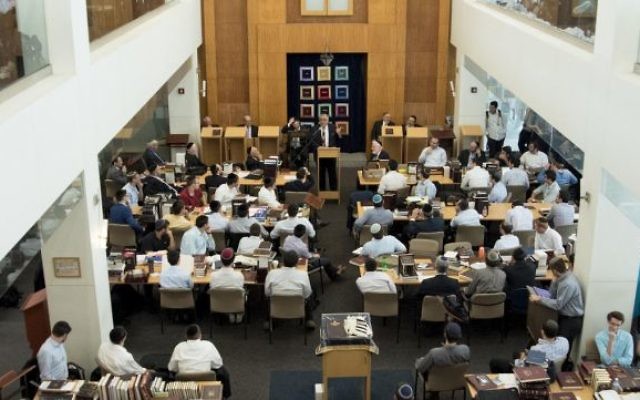 The news coming out of a Yale University study of clergy and politics was not exactly a shocker. The survey showed that more than 80 percent of Reform rabbis and 70 percent of Conservative rabbis identify as Democrats. As with the data that showed that most pastors affiliated with various evangelical denominations are Republicans, the results confirmed what we already knew.

American Jews are overwhelmingly liberal in their politics and, with the exception of the approximately 10 percent who identify as Orthodox, synagogue members and their spiritual leaders are likely to vote for Democrats. Yet the real issue is not why are Reform and Conservative rabbis Democrats, but what they and their Republican counterparts in Orthodox shuls are doing to combat the pervasive toxic political culture that encourages the delegitimization of political foes.

The answer is that many of our clergy that ought to be doing the most to heal the growing rift in our society over President Trump and other issues are instead among those stoking the fires of partisan warfare.

That was made clear by a recent report that showed some liberal synagogues were experiencing a “Trump bump.” Those institutions that are most identified with the anti-Trump “resistance” have experienced some growth. It’s an open question whether they can sustain it. But when rabbis cross the line into open partisanship — even if they claim they are merely talking about issues rooted in religious values — the cloaking of the increasingly bitter political rhetoric of our times in religion comes with a cost that our entire society is paying.

Many on the right transgressed in this same fashion in the previous eight years when President Obama’s often-equivocal attitude toward Israel and his nuclear deal with Iran led some to defame his supporters with over-the-top rhetoric. But are liberals who pull out all the stops to rally their fellow believers against Trump any better?

One argument from liberals claims Trump is so irrational and hateful that just about anything done to stop him or to reverse the outcome of the 2016 election is justifiable. Others point to the administration’s conservative stands on budget cuts, social issues and immigration as reason to make it a religious obligation to oppose him.

But while Trump’s behavior and language is not normal and often tough to rationalize, let alone defend, respecting the results of elections is mandatory if democracy is to survive. Moreover, there isn’t the slightest proof that the apocalyptic fears of his detractors that he will destroy the republic are anything more than hyperbole. As for differences on the issues, the Torah provides a rationale for social justice stands but it doesn’t provide a blueprint that can brand either major party as beyond the pale.

It’s also true that Trump’s talk of changing the law to allow nonprofit religious institutions to take partisan stands wouldn’t help. But the question here is not whether synagogues should have the right to be partisans but whether exercising their right to political speech hurts the community.

The willingness of so many liberal Jews to accuse Trump of fomenting or encouraging anti-Semitism, even though there was no evidence for the charge, was also particularly telling. When the rash of bomb threats to JCCs around the country was proved to be the work of a troubled Israeli teen and an American left-wing writer, those who had asserted that the problem could be traced to Trump’s rhetoric didn’t apologize.

But now that violence against Republicans in the form of the shooting of Rep. Steve Scalise as well as a number of less publicized threats to other GOP legislators have been directly linked to rhetoric that demonized Trump and his supporters, it’s time to wake up to a real problem. The same liberals who were busy making bogus connections between Trump’s rhetoric and violence need to do a cheshbon nefesh about the way their side speaks about political opponents.

In our social media culture in which we can isolate ourselves from opposing views, it is vital that our religious institutions remain safe havens for vigorous debate. Reasoned and vigorous criticism of our leaders is always needed. But the greatest current threat to democracy is the willingness of so many Americans, Jewish and non-Jewish, to view political opponents as enemies to be destroyed rather than friends with whom one can agree to disagree.

It doesn’t matter so much for whom our rabbis vote as it does whether they are actively working to bring us closer together as a people and a nation. If not, they and their synagogues are part of the country’s biggest problem rather than a potential solution.

Jonathan S. Tobin is opinion editor of JNS.org and a contributing writer for National Review. His column appears monthly. Follow him on Twitter at: @jonathans_tobin.