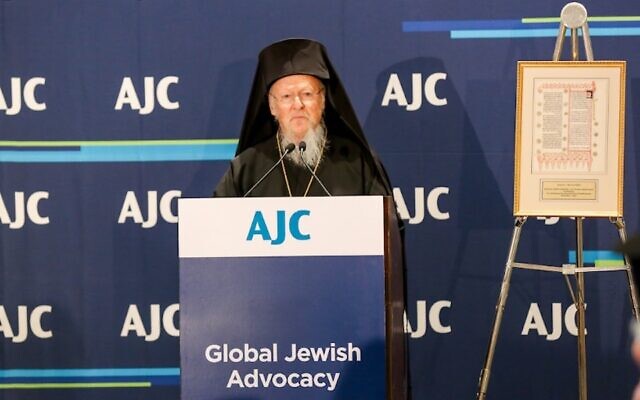 American Jewish Committee honored the spiritual leader of 300 million Orthodox Christians, Ecumenical Patriarch Bartholomew I, with the organization’s Human Dignity Award at a ceremony at the New York Hilton, Nov. 1, 2021. “To fight antisemitism, hatred, and discrimination of all kinds, we all need to be involved,” Bartholomew said in accepting the award. “The role of education and family is very important indeed, but religious communities also have a key role to play in eradicating racism, xenophobia, and antisemitism.”(Michael Priest Photography via AJC)

Good morning, New York. Today is Election Day. Polls are open from 6:00 a.m.-9:00 p.m. Remember the ballot is on two pages — candidates on one side, five ballot measures, including one on expanded voter access, on the other.

THE JEWISH ANGLE: Many key races were essentially decided in June, including mayor, comptroller and public advocate. The Jewish Week’s Julia Gergely has all that Jewish voters need to know.

SOLD: The Forest Hills Jewish Center will sell its building on Queens Boulevard and look for a new home in the same area. (Jewish Week via JTA)

THWARTED JUSTICE: Three New York House Democrats want to know why Nazi war criminals who were found living in the U.S. after the war were prosecuted, convicted and ordered deported but then allowed to die “comfortably in the United States.” (Jewish Week via JTA)

Mimi Levin Lieber, a social scientist who pioneered the use of focus groups in product development and marketing, died on Oct. 16 in Manhattan at 93. (L’eggs pantyhose in egg-shaped containers? Thank Mrs. Lieber.) She was a member of the SAJ – Judaism That Stands For All congregation in Manhattan and the founder of Literacy Inc., a nonprofit that serves lower-income neighborhoods. (New York Times)

Emma Goldberg was named by The New York Times as its new “future of work” reporter. Read a Jewish Week profile of Goldberg, whose parents are J.J. Goldberg, editor emeritus of The Forward, and Shifra Bronznick, founding president of Advancing Women Professionals and the Jewish Community.

Two New Yorkers are among the 25 young leaders named to the Israel Policy Forum’s 2021 cohort of Charles Bronfman IPF Atid Conveners. Emily Einhorn is Encounter Program’s operations manager. Rabbi Scott Kalmikoff of the Upper West Side is the global connections education asssociate at the Jewish Federation of Greater MetroWest NJ. Conveners are trained to lead more nuanced dialogues on the Israeli-Palestinian conflict in their communities.

Explore the customs of Rosh Hodesh — the minor holiday celebrating the new moon — and how it relates to Kislev, the ninth month of the Hebrew calendar, with the Melton School of Adult Jewish Learning. More information here. 1:00 p.m.