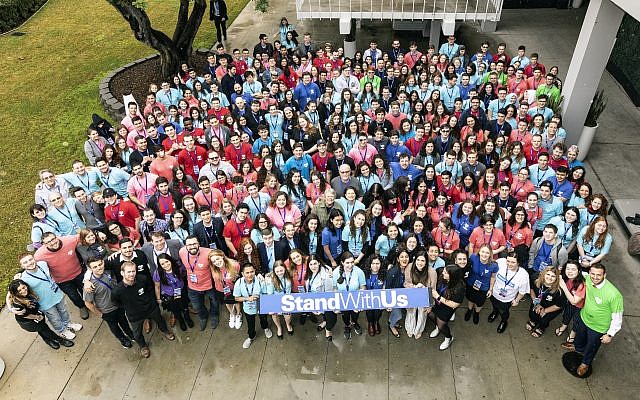 As a StandWithUs High School Intern, I was privileged to attend the organization’s annual “Israel in Focus” International Conference with 500 other Zionist student leaders, community members and partners. StandWithUs (SWU) educates about Israel and fights anti-Semitism on campuses, high schools, middle schools and communities around the world.

The 3-day conference, which was set in Los Angeles from March 1-3, overwhelmingly exceeded my expectations and taught me more about Israel than I could’ve ever imagined. Not only did I gain a deeper understanding of Israel’s important role in the global arena, I also made lifelong friendships.

The Conference presented many opportunities to hear speakers, who provided insights on how the Israeli-Palestinian conflict can affect people throughout the world who are not directly involved and who reside in the area.

Erin Schrode, 27, spoke passionately about how she stood fast in her support of the state of Israel against the onslaught of anti-Semitic vitriol aimed at her during her run for the US Congress as a Democrat from Marin County, Calif. Growing up, she was disconnected from Israel and trusted her friends’ anti-Israel opinions. However, after traveling to Israel on Birthright, meeting Israelis who shared her values and spending five weeks elsewhere in the Middle East, Schrode realized she had been misled and came to feel at home in Israel.

As an activist, and as the co-founder of an environmental non-profit called Turning Green, she recognizes that Israel is one of the most environmentally proactive and innovative countries. Speakers such as Schrode inspire me to educate myself about any topic before making conclusions, and to always listen to both sides of an argument.

Hussein Aboubakr, born in Cairo to a Muslim family, also spoke at the conference. Many people perceive that the Israeli-Palestinian conflict is simply Jews against Arabs, but Aboubakr proves that a Zionist does not have to be Jewish. He was raised to believe that Jews were the ultimate villain but educating himself on the issues changed his life completely.

When Aboubakr began to study his supposed enemies, he was targeted by the Egyptian State Police, placed under surveillance, harassed, jailed and tortured. When the Egyptian Revolution swept in 2011, Hussein became an organizer in Tahrir Square and he was sent to a military detention facility where he was tortured for his contacts with Israelis and writings expressing hopes for coexistence and peace between the two peoples. Aboubakr received asylum in the United States in 2014 and is now an assistant professor of Hebrew, which he studied at Cairo University.

The Conference was a great culmination of my StandWithUs experience. Throughout my High School Internship and under the mentorship of Maria Ntourlia, the SWU Director for UK Community and Educational Affairs, I have developed and presented five programs, in which I educated my peers and the community about Judaism, pluralism and different aspects of Israel. I have also learned the importance of reaching out not only to Jews, but people of every race and religion. By educating ourselves and others on the conflict, we are able to understand why the problems in the region exist, and what actions should be taken to reach solutions.

Sydney Sirot is a senior at Montville Township Public High School in Towaco, N.J. She is a 2018-2019 StandWithUs High School Intern.