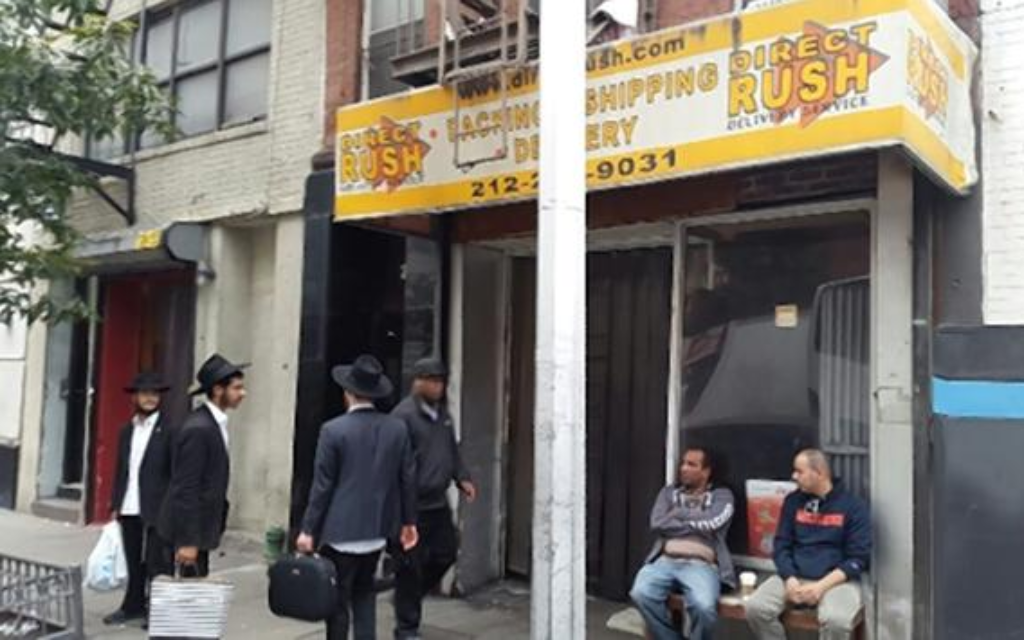 New York City police are investigating as a possible hate crime an attack last week in which a man threw an alcohol-filled bottle at Midtown street corner, where it exploded and burst into flames in front two chasidic students and a 44-year-old businessman.

The 20-year-old students, Israelis who are studying this year at a Lubavitch yeshiva in Crown Heights, were on their usual Friday afternoon rounds of encouraging bypassing Jewish men and local Jewish businessmen to put on tefillin at the corner of Ninth Avenue and West 37th Street when a man threw the bottle, which hit a parked bicycle and burst into flames, according to Barry Sugar, president of the Crown Heights-based Jewish Leadership Council, an independent organization that monitors anti-Semitic attacks in the area.

Witnesses told police that the assailant, who “appeared to be intoxicated” and white, yelled “I want to kill you,” before throwing the bottle “in the general vicinity” of the students and the businessman. Although the attack is being investigated by the hate crimes unit, it is not clear whom the man was throwing the bottle at, an NYPD spokesman told The Jewish Week.

After the bottle exploded, severely damaging the bike, two men then came out of the shop nearest to the attack and put out the fire with a bucket of water. They then removed the bike and swept up the debris before police arrived, Sugar said in a statement. Police could not confirm whether a bike was damaged in the attack.

Gothamist.com quoted an NYPD spokesman as saying that the cops now believe the attack was probably against a manager at Hegazy Food Vendor, the store in front of which the attack took place. According to the website, a man got into an argument with the manager, who is Muslim, before returning with a bottle and throwing it at the corner where the manager and the students were standing.

But an NYPD spokesman told The Jewish Week he couldn’t confirm the argument and that police haven’t yet determined the motivation for the attack.

But in the statement, Sugar said the yeshiva students “are well-known fixtures on Ninth Avenue” who visit the same corner every Friday. “It is conceivable that the attacker sees these boys every Friday and prepared this bomb to ambush them,” he said.

The pair were facing away from the street when the attack took place, and speak little English; they could not give any details about the assailants.

Crownheights.info reported that witnesses claimed that one of the perpetrators “reportedly said, ‘I will come back with a knife.’” Police could not confirm that statement.

None of the three men was injured, police said.

Meanwhile, police are investigating a second attack in Brooklyn, which took place on Saturday afternoon in Brooklyn. A 22-year-old woman was walking past the Bangladesh Muslim Center at 105 Cortelyou Road, between McDonald Avenue and East 2nd Street on the border of Kensington and Borough Park at about 1 p.m. when one or more people threw “unknown objects” at her, an NYPD spokesman said. According to the New York Post, which first reported the incident, the woman was Orthodox and pushing a baby carriage. An NYPD spokesman couldn’t confirm those facts but said the hate crimes unit was notified and the woman was not injured.

The attacks here coincided with escalating violence in recent weeks by Arabs against Jews in Israel, but there’s no indication that the attacks are connected to events in Israel, said David Pollock, director of government relations and security at the Jewish Community Relations Council of New York.

The two Lubavitch students at the scene of the Midtown attack Friday are among a few hundred from Tomchei Temimim Lubavitch, a major Crown Heights yeshiva, who fan out every week on the eve of Shabbat and Jewish holidays on mitzvah missions.

They were studying in yeshiva early this week and were not available to speak with The Jewish Week, but according to Sugar, although the attack upset them, they went back to their outreach activities afterwards.

Will they be back on their usual route this Friday afternoon? “A thousand percent,” Sugar said.