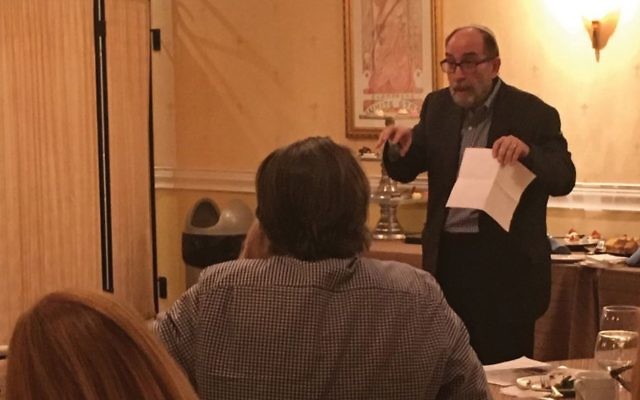 Talking about death, funerals, end of life — even the afterlife—are usually conversations that people avoid. At almost all costs.

Which was all the more reason that Rabbi Julie Danan, rabbi at Pleasantville Community Synagogue in Pleasantville, was eager to explore it. “People don’t know when or how to let go,” she said.

To address those tough topics, Rabbi Danan brought the three-part “Death and Dessert: A Community Conversation on End-of-Life Issues” to the Northern Westchester community. Hosted by Pleasantville Community Synagogue in partnership with Congregation B’Nai Israel in Armonk, Temple Shaaray Tefila in Bedford Corners, Temple Beth-El of Northern Westchester in Chappaqua and Congregation Sons of Israel in Briarcliff Manor, the program was supported by grants from UJA-Federation of New York and the Plaza Community Chapel.

“UJA offered these micro-grants to support the creation of Jewish experiences for Northern Westchesterites by Northern Westchesterites”, said Ellen Thurm, UJA’s director of Impact Philanthropy, in an email response. “One aspect of this program that’s especially appealing is that it’s held in a public space, which makes the workshop welcoming to Jews of all denominations, as well as those who are unaffiliated.”

For Amy Gutenplan, president of Pleasantville Community Synagogue, the program was a “way of getting the Jewish community together outside the walls of the synagogue and addressing a difficult topic.”

In her previous congregation in Northern California, Rabbi Danan, who had served on a chevra kadisha in her hometown of San Antonio, Texas, the community started its own chevra kadisha.

“My congregation back in California really got involved,” she said. “It was so real, and so meaningful, and such a profound experience.” As baby boomer members start “thinking about mortality,” either their own or their parents’, “they want to reclaim it for themselves.”  By offering “some relaxing setting, where they can talk about these issues over sweets and coffee,” said Rabbi Danan, there’s a comfort level about these challenging discussions.

These “death cafes” are not new — the movement was launched in Switzerland about a decade ago — but the program was new to the Northern Westchester community.

“It’s important to talk about death and dying,” said Ellen Sovern of Mt. Kisco. “I didn’t believe there were Jewish teachings about the afterlife.”

Similarly, said Tara Framer of Tarrytown, dealing with end-of-life issues for her 87-year-old mother has triggered complex reactions. “I didn’t know what steps to take with her,” she said. The end of life program was “done in such a way that it was provocative and evocative, and brings up a lot of emotions.”

According to Gutenplan, some participants who had recently lost loved ones found the program on the afterlife “provided a lot of comfort.”

Raphael drew upon kabbalistic and chasidic teachings, as well as other texts, to explain Jewish thought about the afterlife. “In dying, it’s a journey of transformation of multiple aspects of our being,” said Raphael. “Our tradition suggests there’s a transition. There’s a window, not a wall. There is a connection between the world of the living and the world of the dead.”

As Rabbi Danan said “There’s so much wisdom in these customs [around mourning rituals]. It’s a treasure to have these rituals and traditions.”

For more information about the last program June 7, from 7:30- 9:30 p.m., please call Pleasantville Community Synagogue at (914) 769-2672 or register and pay online at cheddarup.com/tabs/death-and-dessert-conversations-on-end-of-life-issues-3. While walk-ins are welcome, pre-registration is preferred. There is a fee of $18 to cover costs.