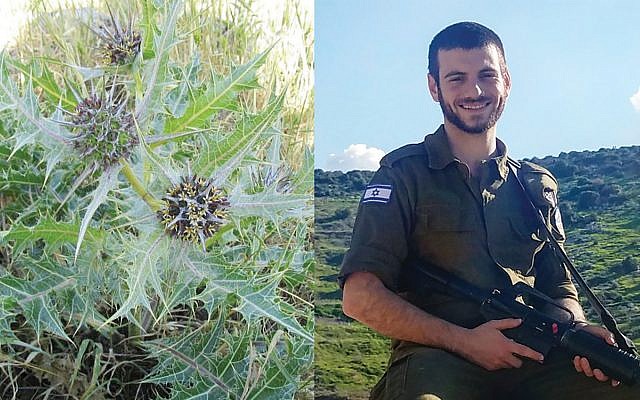 A prickly purple and green tumbleweed may turn out to be a powerful seed of Israeli-Palestinian cooperation, thanks to the imaginative vision of an American-born soldier in the IDF.

Akoub is an edible weed that grows wildly in the West Bank as well as across parts of the Middle East. It ripens in late winter and early spring, and for many Palestinians, it’s a delicacy; its stems are said to taste like a cross between asparagus and artichokes. It is also thought to have healing properties.

The plant, officially known by the Latin gundelia tourefortii (and akoub in Arabic) knows no borders, growing on Israeli and Palestinian lands. In recent years, with high demand and extensive picking, the plant faced local extinction. In 2005, Israel placed akoub on its endangered plants list; these days much of the harvest is seized by Israeli authorities when Palestinians are caught picking it.

Yonatan Rabinovitch, a 24-year-old soldier who grew up in Riverdale and graduated from SAR High School and Queens College and serves in the IDF unit known as COGAT (The Coordinator of Government Activities in the Territories), came up with a plan to teach Palestinians to cultivate akoub.

Rabinovitch, who made aliyah in 2017, tells The Jewish Week that the project fits well with his unit’s mission to protect the environment, promote the Palestinian economy, reduce the conflict between the IDF and the local population and, ultimately, increase security.

“We envision a future in which a broad network of Palestinian growers, with the assistance of Israeli and Palestinian experts, creates a supply that both satisfies Palestinian demand and exports its produce to the Israeli and even international markets,” he says.

In a telephone interview, Samir Moaddi, who heads the agriculture ministry in the West Bank, praises Rabinovitch’s creative idea, which marks the first time an American-born soldier has come up with a new agricultural initiative to be implemented by COGAT.

“We’re working all the time to improve agriculture as it is so integral to the Palestinian economy,” Moaddi says, “and so closely linked to security.”

The idea for cultivating akoub has roots in the hugely popular television show “Fauda.” Rabinovitch picked up on an important clue: An Israeli secret operative, pretending to be a Hamas operative from Gaza in prison, says that he loves his mother’s akoub. He gives himself away as there’s no akoub in Gaza, only in the West Bank. Rabinovitch, suddenly curious about this green he hadn’t heard of, began doing research.

He soon cooked up a plan and went to his commander, who then presented it to Moaddi. After about a year, Rabinovitch got the green light to proceed. He reached out to the few farmers in Israel and on the West Bank who were already growing it to get seeds, began approaching international agencies that might have an interest in funding the project, and obtained a budget that would allow them to test a pilot project in 10 dunams, about 2 ½ acres, in Nablus.

“If we’re successful, we’ll find another source for seeds and then we’ll plant thousands of dunams in the West Bank,” Rabinovitch, whose army service concludes this month, says.

With its thorns removed, akoub can be eaten raw, or it is often cooked in stews and soups, or fried with eggs. Rabinovitch has never tasted the plant. Nor has Moaddi, who is Druze and grew up in a village near Haifa and jokes that his tastes are Ashkenazi. But he says that his wife and her family love it.

In addition to offering educational courses and agricultural tours (involving more than 1,500 Palestinians a year), Moaddi explains that the unit has had special projects involving planting baby cucumbers, strawberries and pineapple. For example, the baby cucumber initiative started out with three dunams, and now has more than 3,000 dunams and a product with a market value of about 50 million shekels.

“Agriculture creates a special form of security, influencing the situation on the ground,” Moaddi says. “We hope this will be a bridge to peace.”