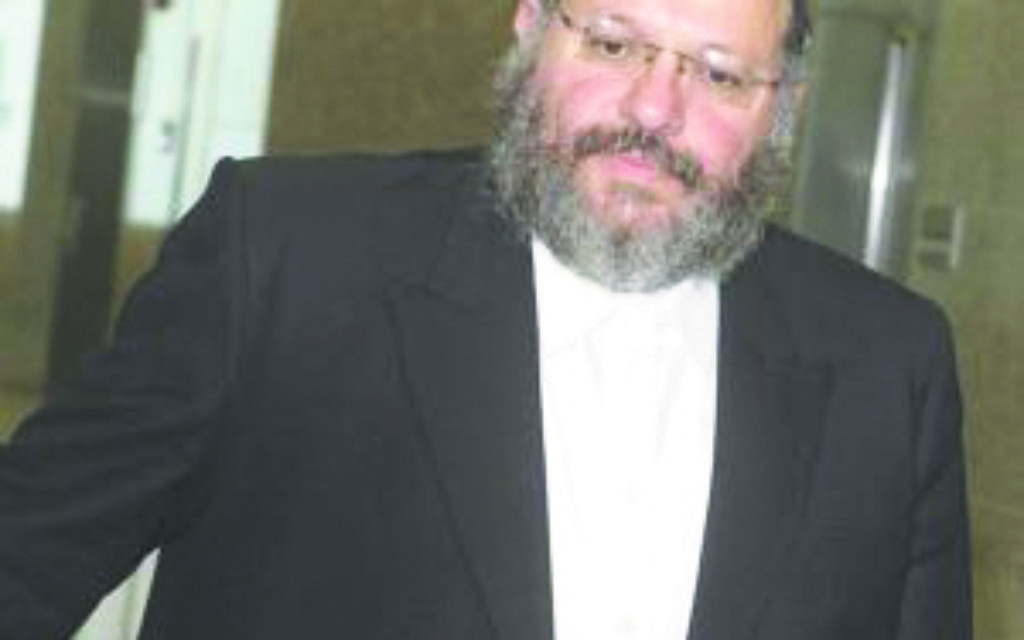 The case of Nechemya Weberman, an unlicensed chasidic therapist who was convicted Monday on 59 counts of abuse and faces up to 117 years in prison, is noteworthy for a number of reasons, chief among them the fact that his victim pressed charges in the first place.

For more than two weeks spectators and members of the press packed the Brooklyn courtroom where the prominent Weberman was on trial for sexually abusing a girl sent to him for counseling. From the moment she reported the abuse, the victim — one of several “wayward” girls referred to Weberman for “help” — was subjected to intense pressure to withdraw her claim, including intimidation, harassment, social ostracism of her family and even a reported $500,000 bribe. Last spring, members of the Satmar community held a lavish fundraiser for Weberman’s defense. Not long after, four men were arrested and charged with witness tampering in connection with the case. And on Nov. 29, four chasidic men were arrested for taking the young woman’s picture — which was then posted online — as she testified in the courtroom.

The case is also significant for the amount of public support the victim received, if not necessarily from mainstream members of her community then from her family, close friends and advocates, many of whom appeared in court and used social media to spread the word about the trial. Only three years ago the late judge Gustin Reichbach issued a stinging critique of the religious community from the bench, noting at his sentencing of a bar mitzvah tutor convicted of molesting two of his students “a communal attitude that seems to impose greater opprobrium on the victims than the perpetrator.”

However, many people with ties to the chasidic community believe there is something even more important about the Weberman case — namely, what it exposed about the larger communal role played by chasidic “modesty committees” in communities like Williamsburg, Borough Park and the upstate enclave of Kiryas Joel. These groups — to which, sources say, Weberman was connected — originated years ago to guard the “purity” of the community by enforcing strict dress and behavior codes that characterize the insular chasidic lifestyle. But, insiders say, the tactics of these self-appointed freelance modesty patrols, known as Vaadei HaTznius, have evolved from public shaming to extortion and threats.

One woman, Baila Gluck, who took the stand in Weberman’s defense (she had lived for a time in his office apartment and said he had never acted inappropriately toward her) testified that when she was a teenager, masked individuals — presumably from the Vaad HaTznius — came into her bedroom to take away her cell phone.

The narrative that emerged from the trial testimony is that a chasidic girl, perceived as “acting out” by the standards of her school and family — defying the community’s dress code, communicating with boys, asking questions about the existence of God — was sent to Weberman for therapy. She was 12 at the time, and the move apparently came at her school’s insistence and under threat of expulsion.

Both the girl’s mother and a principal at the school, Benzion Feuerwerger, testified that the school, United Talmudical Academy (UTA) at one point required the family to pay $12,800 in advance for Weberman’s “therapeutic” services before they would accept her into their summer camp and back into the school the following year. According to her testimony, the mother challenged the propriety of Weberman taking the girl, alone, on a long drive in his car, a clear violation of the chasidic prohibition against a man and a woman who are not married to each other being alone together. The mother claimed that Weberman demanded an apology from her for challenging him and that the school ordered the family to go along with it, according to the mother’s testimony.

The young woman, now 18, alleged that Weberman, who often “treated” her in a locked room containing a bed, began touching her sexually during their sessions, which also came to include forced oral sex. The abuse went on for years and was reported to the authorities only after the young woman disclosed it to a counselor at a new school she was attending.

For its part, the defense argued that the young woman fabricated the abuse allegations in order to exact revenge on Weberman, who, they said she believed, breached her confidence and told her parents about a relationship she had had with a boy. Weberman’s attorneys also argued that the young woman’s family had a business dispute with Weberman, which may have been an additional motivation for her allegations.

However, community members and observers believe that Weberman’s connection to the modesty committee and his ties to the Satmar schools made this case about more than one woman’s allegations of sexual abuse against a man ostensibly charged with helping her.

A message left with the administrative offices of UTA seeking comment was not returned.

Many observers believe that the relationship between Weberman, the modesty committee and the school is something the leaders of Satmar do not want explored in any depth; they speculate that this likely accounts for UTA’s apparent reluctance this summer to respond to subpoenas for records on Weberman. That reluctance, it was reported, may have prompted Justice Ruth Shillingford to consider slapping the school with contempt charges (no such charges were brought and presumably UTA ultimately responded to the subpoena).

It also may explain why Feuerwerger, when questioned on the stand, denied knowing about the existence of the Vaad HaTznuis, a statement that drew laughter from observers in the courtroom. It also drew incredulous comments from current and former community members.

Ari Mandel, the founder of Zaakah, a grass-roots group that organized demonstrations in support of the victim and other abuse survivors, told The Jewish Week he was “stunned” that Feuerwerger would make such a claim under oath. “Any 4-year-old in that community, a Shabbos goy in that community, knows what the Vaad HaTznuis is. Every chasidic community has [one].” (The Jewish Week has a copy of a document written on the letterhead of the Williamsburg Vaad.)

These sentiments were shared by Joel Engelman, himself a survivor of abuse in the Satmar community and an advocate for victims.

Engelmann first became privy to the Vaad’s workings through his job, in 2004-2005, as a driver and personal assistant for Yakov Yagen, another unlicensed, self-styled therapist who, along with members of the Vaad, told Engelman he was working for them. (Yagen initially told Engelman he was a surgeon; that wasn’t true).

“Weberman was at the helm of [a group within the Vaad] and together with the others worked with Yagen on a daily basis,” Engelman said. “I was present at many occasions when they were discussing the workings of the Vaad, whether it was informal meetings, or formal discussions on the speaker phone, which I was privy to when I was driving him.” Engelman also remembers driving Yagen either to or from two meetings of the Vaad in Williamsburg.

Yagen did not reply to e-mail and phone messages seeking comment.

According to Engelman, one of the roles of the Vaad — which comprises various “divisions” and whose members’ names are not publicized — is to conduct surveillance on those who are thought to be transgressing. Examples include local businesses that may be featuring immodest window displays or creating an atmosphere conducive to mixed-sex socializing. Young people who are spending time with members of the opposite sex or leaving the community to attend movies or go to bars or clubs are also targets, as are those who are having affairs.

Armed with their “evidence,” Vaad members then approach their subjects and, according to Engelman, attempt to persuade them to pay for therapy — with “therapists” they select — or risk public exposure.

Engelman recalls one situation where he was present in which a community member, a man who was not from the United States, was told he had to put his “at-risk” daughter in therapy with Yagen or face her expulsion from school.

In what could be seen as an extension of its role in addressing transgression, the Vaad also deals with alleged child molesters. However, it does so, insiders say, without involving the civil authorities and often through extortion.

Engelman experienced this personally when he tried unsuccessfully to have a teacher he alleges molested him, Rabbi Avrohom Reichman, removed from his position at UTA (Engelman’s story was featured in The Jewish Week in 2008). According to Joel’s mother, Pearl Engelman, when the family first brought these allegations to the attention of Satmar officials in April 2008, two members of the modesty committee, Meshulem Jacobowitz and Zalmen Leib Leitner, acting on behalf of UTA, invited her son to a meeting. They claimed, according to Pearl Engelman, that they had already arranged for Reichman to leave UTA and the teaching field altogether when he “suddenly decided to deny the molestation.”

The committee ultimately ordered Reichman to take a lie detector test, which he apparently failed. Although he was then fired from the school, he was — despite assurances from Leitner and Jacobowitz — rehired as a teacher at the Satmar bungalow colony that July and returned to his teaching position in the fall. Further, despite the fact other people came forward with similar allegations about Reichman (in one case to Brooklyn Assemblyman Dov Hikind), nobody ever pressed criminal charges and he continues to teach young boys at UTA.

Occasionally, according to community members, the Vaad will take more public action regarding a molester. For example, in the spring of 2008, what can be translated from the original Hebrew as the “Vaad Guarding the Holiness of the Holy Community and Holy Torah and Education Institutions of Williamsburg” issued a printed warning in Hebrew about a man in the community who was “defiling young Jewish children” by “sodomy-type acts” in “cellars, in bathrooms and in mikvehs.” The warning, which identified the man as Moshe Zecharia Rosenbaum and also contained his photo, noted that Rosenbaum had already been told to stop a number of times by the committee but “remains defiant.”

The document was distributed to all of the men’s mikvehs in the community and it instructed those overseeing the ritual baths to forbid Rosenbaum from entering, noting that if he failed to comply, the warning would be posted in the synagogue.

“[From] now on responsibility rests on your shoulders,” the warning concluded.

Despite these allegations, nobody on the Vaad — nor anyone else in the community, including any of Rosenbaum’s alleged victims — reported him to the police or legal system at the time. In fact, the authorities only learned of his actions after his ex-wife committed suicide and her mother went to court to seek custody of their child (no abuse was alleged in that case). The lawyer representing the late mother’s parents, who is not a member of the community, reported Rosenbaum to Brooklyn District Attorney Charles Hynes.

According to court documents from that case obtained by The Jewish Week, several members of the Vaad — specifically, Yidel Schlesinger, Zalman Leib Feldman and Abraham Jacobowitz — were subpoenaed to provide information about what they knew to the family court.

While Schlesinger, Feldman and Jacobowitz could not be reached for comment, a source familiar with the case told The Jewish Week that the only reason these men, angry at Rosenbaum for his defiance, were willing to testify in family court was because they knew that without a victim willing to press criminal charges, their testimony would not result in Rosenbaum’s arrest or prosecution.

While a spokesman for Hynes told The Jewish Week that the case is under investigation, neither Rosenbaum nor anyone who failed to report him has been charged with a crime. In the meantime, according to the source, Rosenbaum was “shipped off to Israel” by his parents at the insistence of the Vaad.