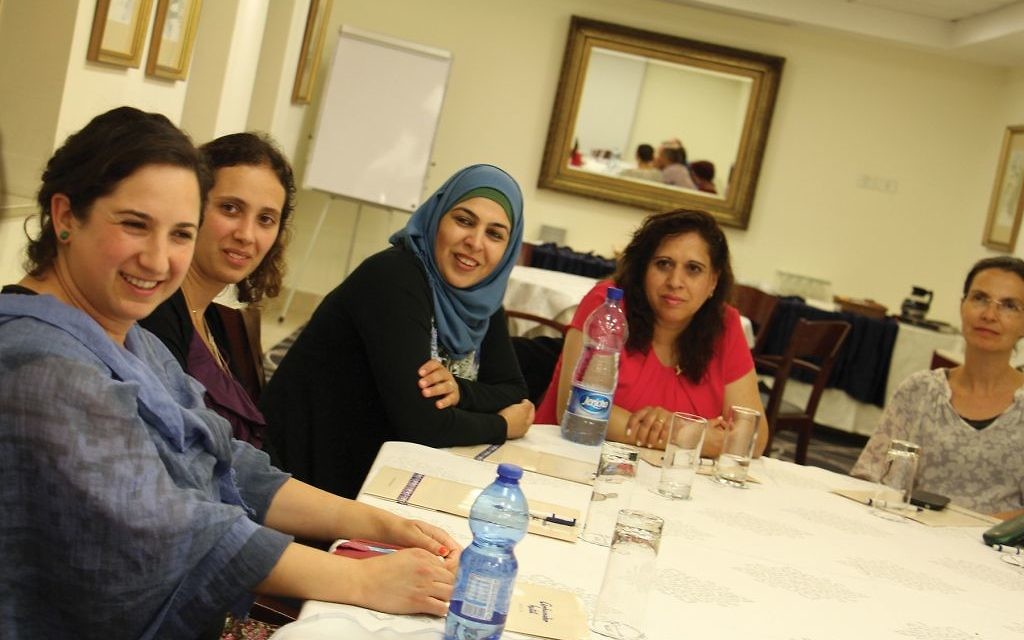 A Center for Educational Technology session for Jerusalem school principals. “These are not the usual suspects from the left,” says Myriam Darmoni Charbit, a CET official. “They are not used to sitting in the dialogue circle.” Photos courtesy of CET

Charbit, director of civics and shared life education at Israel’s Center for Educational Technology (CET), brought Jewish and Arab school principals from east and west Jerusalem and officials from the education ministry to Belfast in 2016, and again in 2017; they were there to observe how previously antagonistic groups of Catholics and Protestants cooperated in educational ventures. While fully aware of the differences between the Irish and Israeli situations, the Jewish and Arab educators began a process of dialogue for mutual understanding, and then created their own joint learning initiatives. 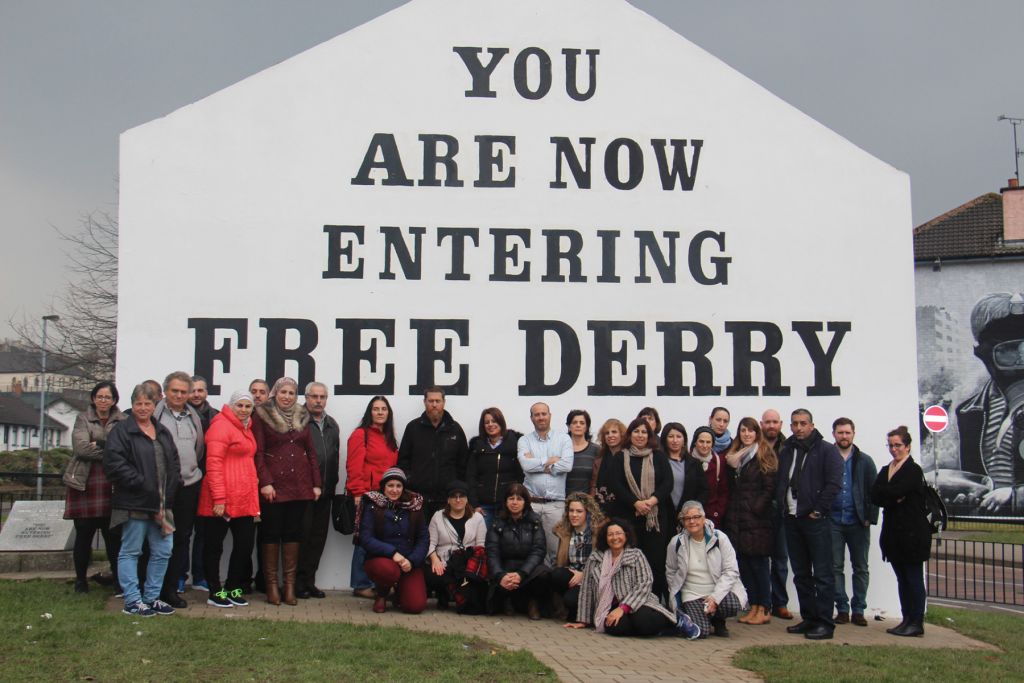 Principals from East and West Jerusalem and education ministry officials traveled to Northern Ireland to study how Catholics and Protestants joined in educational ventures.

Back home, the principals — from religious and secular schools in both communities — engaged teachers, parents and then the students. They built partnership groups of two to four schools, whether sharing English classes or language skills in Hebrew and Arabic, robotics or, for two girls’ high schools, drama.

Charbit recalls a conversation she had with an Arab participant in the drama program. “I don’t want to say much about what happens in my family and the refugee camp where I live. It is painful,” the participant said, adding that while he understands that every society has good and bad people, “Up to now, I have not had the important opportunity to meet the good people among Jews. And now I have and for me it is a proof that peace is possible and worthwhile.”

After a century’s worth of enmity between Israelis and Palestinians, and 50 years after the convulsions of the Six-Day War, this is one of several projects in Israel exploring in concrete ways the concepts of “shared space” and “shared society.” The idea is to create a shared experience that is authentic, inclusive and based on equal access to opportunities, recognizing not only the basic dignity of people from different backgrounds, but also their mutual interests as a way to advance society and shape a better future for all. The idea of shared space goes beyond the idea of coexistence, which has been discussed for several decades.

These initiatives are full of complexities and challenges, but all those involved would agree that much is at stake. In Jerusalem, with its large populations of Arabs and ultra-Orthodox, religious and secular Jews, the situation is different than in other areas where Arabs are citizens of the state. The majority of Palestinians in east Jerusalem are recognized as residents of the city, but are not citizens. 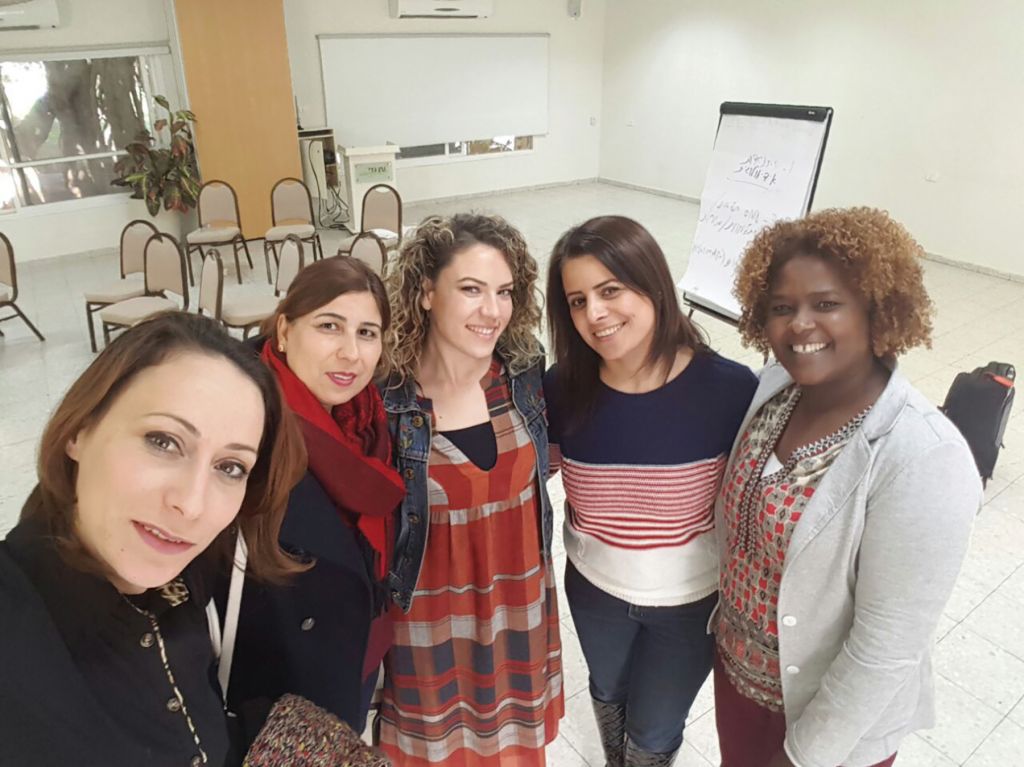 “A growing number of civil society initiatives are working to ensure that Arab citizens, more than 20 percent of the population, can participate in a shared Israeli society as an essential part of Israel’s strength and future. The government, which has made economic integration of Arab citizens a major priority, is starting to make this a priority as well,” says Michal Steinman, executive director of the Inter-Agency Task Force on Israeli Arab Issues, which serves as an educational platform for North American Jewish communities about Arab citizens and Jewish-Arab relations in Israel.

Charbit, who was born in France and made aliyah at age 17, was a captain in the air force in 1995 when Rabin was assassinated. She then decided to end her military career and dedicate her efforts toward education for democracy and human rights. For the last few years, she has been focusing on developing an innovative methodology toward shared education. While she has initiated programs in many areas of the country with CET, she says that Jerusalem is the most challenging, “and therefore the most promising if things go well.”

There are now 40 Jerusalem schools involved in the program; they include schools in Arab neighborhoods including Bet Hanina, Shuafat and Sheikh Jarakh and such Jewish neighborhoods as Ramot Eshkol, Kiriat Hayovel and Rehavia. Charbit says the principals and teachers participating are “not the usual suspects from the left; they are not used to sitting in the dialogue circle, not people who go to peace rallies. For them, this is a life-changing, transformative process.”

One Arab-Jewish initiative brings together students on the autistic spectrum and their parents, and several group members ran the Jerusalem Marathon together. Another learning initiative brings middle school students together to study Hebrew and Arabic at Hebrew University, a neutral site, where they are also exposed to students from many backgrounds. 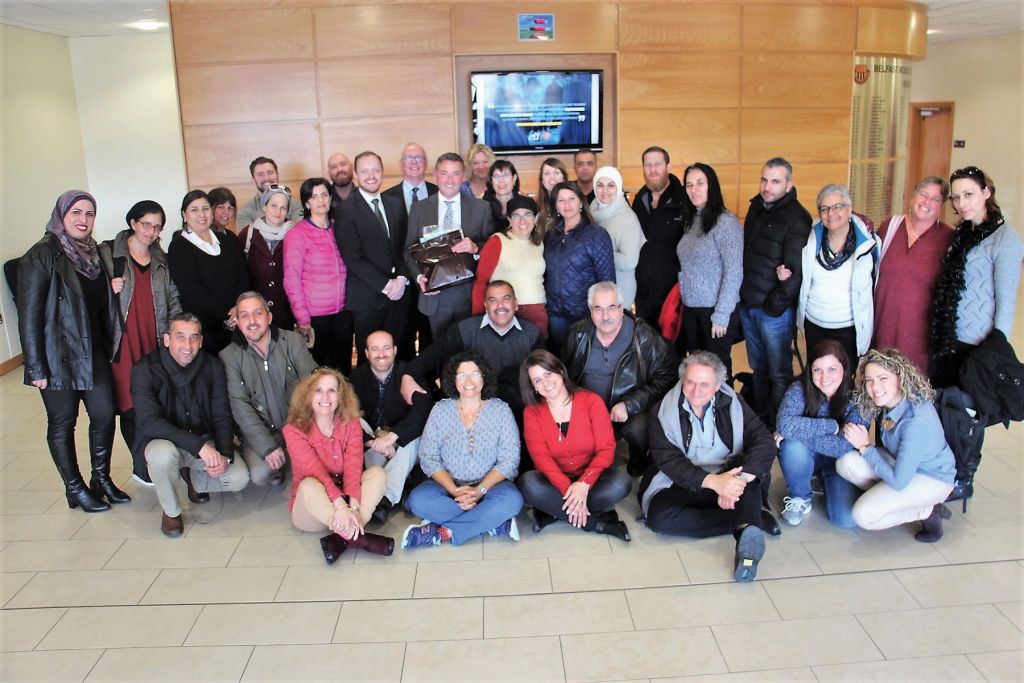 Forty Jerusalem schools are now involved in the program.

“We want to show both sides that there are good people on both sides, that pray, dream and long for a better shared future together, without violence, with more equality,” Charbit says.

As part of its anti-normalization policy, she explains, the Palestinian Authority, which oversees the curriculum of east Jerusalem schools, does not condone efforts toward reconciliation that appear to accept the status quo. It permits technical assistance projects, and these educational efforts are shaped to be seen in that light.

Likewise, a few months ago, when I interviewed Israeli author David Grossman in his Jerusalem home, he lamented that he had very little contact anymore with Palestinian writers. While a group of Jewish and Palestinian writers used to meet regularly, the Palestinians pulled out, as they didn’t want it to appear to be involved with a “normalization of relationships.”

“They feel that if they befriend Israeli writers, Israel will use them to show that the situation is OK, there are all kind of normalcies and routines, that occupation is not so bad. I cannot say if I justify them or not. Who am I to tell them how to behave after I have occupied them for 50 years?’

Mohammad Darawshe, director of the Center for Equality and Shared Society at Givat Haviva, has long been involved in trying to advance Arab-Jewish understanding and civic equality. Before re-joining Givat Haviva in 2013, he worked as director of the Abraham Fund initiatives.

“How do we integrate schools?” he asks. “To talk about busing is impossible. But if we can’t bus the kids, let’s bus the teachers.” In 2005, he began an exchange program, which continues all over the country. Now there are more than 500 Arab teachers working in Jewish schools (operated by the Abraham Fund and Merchavim Institute for Shared Citizenship in Israel), and, since 2014 (initiated by Givat Haviva) more than 100 Jewish teachers in Arab schools, with plans for more than 120 in September.

“This changes stereotypes. It changes reality on the ground, it creates humanization, allows dialogue and creates interdependency,” he says. The teachers involved teach language skills, math, science and English — many subjects, but not history. “If an Arab student has a Jewish teacher, and that teacher gives him skills for life, he will relate to that teacher and to others very differently.”

In December of this year, Givat Haviva will present its “Roadmap for a Shared Society” to the Knesset. The report emphasizes education along with economic development in the Arab sector, including the establishment of high-tech employment opportunities in Arab areas and developing a shared cultural language in the arts.

In the public sphere, shared space implies a greater effort towards signage in both Arabic and Hebrew, bus stations that have the same level of facilities and public transportation directions in both languages.

“We have to create a public space friendly to significant shareholders,” Darawshe says, and then offered personal examples. He lives in Iksal, where his family has lived for 28 generations. He explains that at a recent meeting with a head of the Bank of Israel, he refused to take the director’s business card when it was offered to him, as the card was only in Hebrew. “You should have Arabic on your card,” he told her, as she was representing governmental organization. She said they have Arabic signage in the building, but he then pointed out that it was only on signs indicating danger.

One of his daughters, who lives in Jerusalem and studies at Hebrew University, has told him of experiencing seven incidents of racist behavior on mass transit. In three cases, when she was taunted and asked to leave the light rail car because of her Arab background, several Jewish classmates stood up with her, argued on her behalf and in one case left the scene with her.

Shuli Dichter is a long-time civil society activist in Israel who serves as executive director of Hand in Hand, which runs six bilingual Hebrew-Arabic schools around the country. He says that enrollment at their schools is up, from 1,576 this year to about 1,700 next year. He explains that the organization promotes shared space through the schools — which are public, not private — and also through the communities that exist around the schools — parents, volunteers and activists who support the work. Hand in Hand expects to have 15 schools within the decade.

“We don’t want to lay the burden of creating a shared future on the shoulders of our children and exempt ourselves from responsibility. It’s viable only if adults are actively part of it,” he says. “This is our vision for the entire country.”

Gili Rei, a Jewish parent at Hand in Hand in Jerusalem and co-chair of the Parents Committee, says, “We found a home here, in our shared life — where we create something together that does not erase where we come from, but that builds a space with enough room for us all.”

About the tensions of the world just outside the school, Dichter says, “We do feel it. We work around it in school. When children are coming from East Jerusalem and other corners of the city and have to pass checkpoints and get searched, they come to school and can’t disconnect from that. We encourage them to bring the outside inside.”

“In school we are not just defusing the tensions, we discuss it. We dialogue around the tensions; many times it’s a good subject for learning.”

The school teaches history through a bi-narrative methodology, and in grade 9, when 1967 comes to the table, the students discuss it as “students who are part of this ongoing history.”

Darmoni Charbit tells a story from Belfast, of a religious Jewish principal who was trying to find her way to meet up with the group at a pub. She ran into three Palestinian principals who wouldn’t go into the pub but turned around and walked her there.

“In Belfast, an Orthodox principal felt safest with principals from the Shuafat refugee camp. No one in Jerusalem would believe that. I feel hopeful if these things can happen — that these people come to care deeply about each other and are leaders in their communities — that we can make change, one school at a time, one child at a time.”

And there is the organization that shares grief: The Parents Circle—Family Forum is a group of people on both sides of the conflict that is led by Palestinian and Jewish co-directors. All of them have lost family members to the conflict. They have chosen the path of reconciliation after their loss, in search of justice and peace.