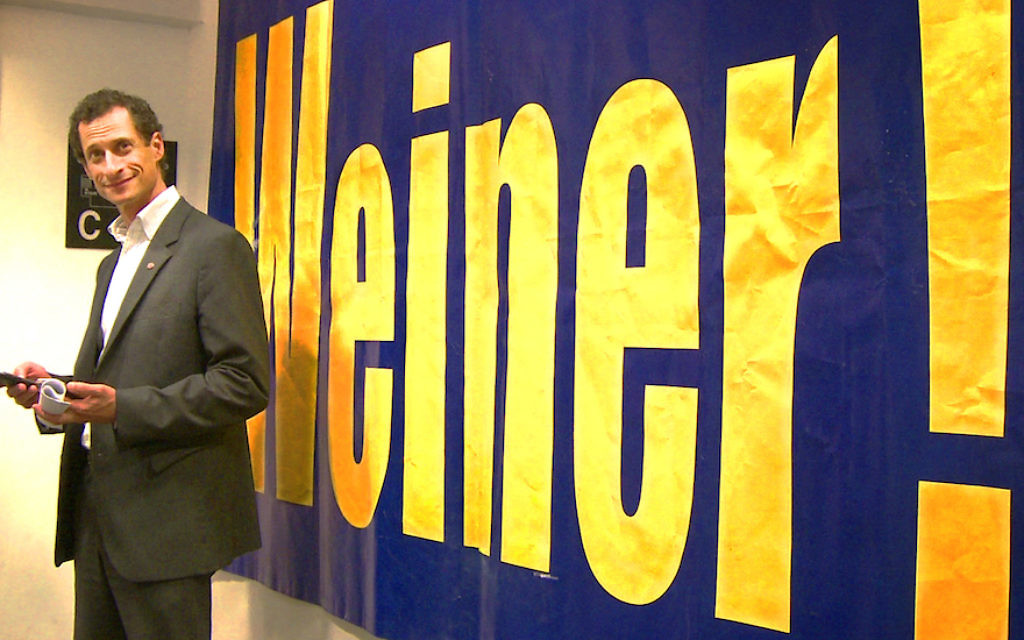 It’s just before Rosh Hashanah in 2013, and New York City’s mayoral campaign is heating up. Disgraced former congressman Anthony Weiner, who in a surprise move had thrown his hat in the ring a few months earlier, is doing one of those obligatory photo ops at a Jewish bakery in Brooklyn.

All is going well. Weiner has picked up an order of cookies laced with honey — sweets for the New Year — and even insisted on paying full retail. As he is leaving the store, though, a man wearing a kippah calls him a “scumbag” and a “deviant.”

Perhaps not surprisingly, the combative politician loses his cool and gets into a verbal confrontation with the heckler — “takes one to know one, jackass” — that makes the evening news.

Such scenes are captured in unflinching detail in “Weiner,” a film that won the Grand Jury Prize for documentary at the Sundance this year. The film follows the campaign from its late but implausibly plausible start — the other candidates had been campaigning for months — to its headline-making flameout.

It offers an insider look at Weiner’s mayoral run. Take, for example, the bakery incident: What the news cameras did not pick up — but the filmmakers’ mics did — was that the heckler also issued a racial slur, noting that the pol is “married to an Arab.” (Weiner’s wife, Huma Abedin, is not Arab. She’s half Indian, half Pakistani.)

But by the time the insult became public, the news cycle had moved on. The damage was already done, further contributing to Weiner’s decline both in the polls and the public’s esteem.

As anyone who read a tabloid or watched a late-night talk show in 2011 likely remembers, Weiner was a scrappy, popular Jewish congressman from New York who gained infamy after he was caught sending an explicit photo to a female Twitter follower. Instead of sending a private message, however, Weiner sent it via his public account, visible to the world. First he denied it, suggesting his account was hacked. Eventually, however, he admitted sending photos to “about six women” and, disgraced, resigned from Congress.

“I hope that just as my wife has forgiven me, that I get a second opportunity to talk to New Yorkers about the challenges they face,” he said at the time.

When Weiner announced his unexpected run for mayor, Josh Kriegman, a former Weiner staffer turned filmmaker, and his co-director, Elyse Steinberg, were given permission to document his campaign.

“He had been reduced to a punchline, a caricature,” Steinberg told JTA in a telephone interview. “We wanted to have a film go behind the scenes and create a human portrait. That was our intention.”

At first it seemed that was what they were going to get. In a crowded primary field — there were nine candidates running — Weiner defied expectations and took a commanding lead.

“He rose to the top of the polls and we thought we were filming a comeback story,” Kriegman said.

But as the film documents, what happens to Weiner is deja vu all over again, to quote Yogi Berra. In July, just two months after he entered the race, revelations of a new scandal emerged: Even after his resignation from Congress, Weiner was at it again, using the nom de plume Carlos Danger and adding phone sex to his list of offenses.

Ultimately, the documentary creates the human portrait the filmmakers were aiming for — but the portrait is of a deeply flawed human, one with an ego so large and needy that he uncomprehendingly risks everything for long-distance sex.

On the surface, the filmmakers should have been pleased about the second scandal, as it seemed certain to add a level of buzz to the doc. But as Kriegman points out, “It was a pretty exciting story before the scandal broke out again.”

But even as the news broke, Weiner allowed filming to continue. Why?

“It’s a good question,” Kriegman said. “And I don’t know the answer.”

Steinberg believes it was an extension of Weiner’s original motivation going into the filming.

“When the scandal broke again, his desire was to have an opportunity to tell a complete, nuanced story,” Steinberg said. “The punchline is true about me,” Weiner tells the camera, early in the film. “I did the dumb thing. But I did a lot of good things, too.”

“Weiner” is most compelling when Abedin, a longtime Hillary Clinton staffer, is on screen. From the beginning, it appears as though she is not an eager participant — neither in the campaign process nor the making of the film.

“It took a while, lots of work and a whole lot of therapy before I could forgive him,” she says to the camera before Scandal 2.0 broke.

But once Carlos Danger is set loose, watching Abedin put on a brave face for the camera feels like passing a car accident on the highway: You know you probably shouldn’t look, but you can’t turn away. As a viewer, you almost feel dirty for intruding in what should be private moments, such as her refusal to appear in a campaign commercial.

The approach by Kriegman and Steinberg is more fly-on-the-wall than journalistic — in fact, at one point, Kriegman asks Weiner a question about continuing his run for office, and the ex-congressman tells him flies on the wall are not supposed to speak.

Eventually the filmmakers get a Q&A session with their subject, at one point asking why he felt compelled to sext. In response, a subdued Weiner offers some long-winded psycho babble about his need for affection and how people go into politics because of their inability to connect with others in the real world.

“Weiner” is a political junkies’ dream, a fun behind-the-scenes view of a campaign that’s somewhat similar to “The War Room,” the documentary about Bill Clinton’s 1992 campaign for president that ran into a sexual stumbling block of its own — Gennifer Flowers. One major difference: Clinton went on to win.

According to the filmmakers, Weiner has not seen the film and has no plans to do so — which reveals he is capable of making a wise decision.

“Weiner” opens May 20 in New York and Los Angeles, with other cities to follow. It will be available May 26 on VOD.