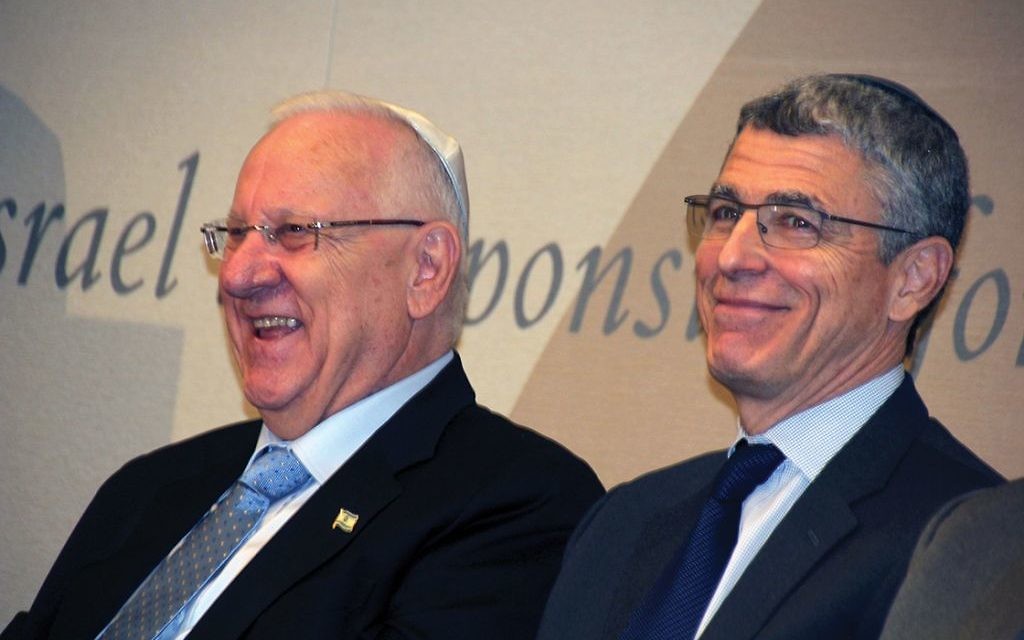 It was all hugs and smiles when Israeli President Reuven Rivlin met last Friday with leaders of America’s three main Jewish denominations at an event hosted by UJA-Federation of New York.

But when it came time to speak, the Reform and Conservative leaders made clear they had no intention of papering over their disappointment with Israel’s government when it comes to non-Orthodox rights in Israel.

Both Rabbi Rick Jacobs of the Union for Reform Judaism and Rabbi Steven Wernick of the United Synagogue for Conservative Judaism called on Israel to grant equal rights to non-Orthodox Jews on matters concerning marriage, divorce, conversion and worship at the Western Wall.

“We insist on equality, not just at the Kotel — the Western Wall — but also in rabbinical courts, under the bridal canopy, at funerals and conversions,” Rabbi Jacobs said. “It cannot be that Israel will be the only democratic state in the world that formally does not grant equal rights to the majority of the Jewish people.”

Rabbi Wernick applauded the Israeli president for citing the late Conservative sage Abraham Joshua Heschel in Rivlin’s remarks at the White House Hanukkah party on Wednesday. “Yet Rabbi Heschel in Israel would not be afforded the same rights as our Orthodox brethren — can’t do marriage, can’t do divorces, can’t do conversions,” Rabbi Wernick said.

When Rivlin’s turn to speak arrived, he made a point of calling attention to the fact that he was referring to Rabbis Jacobs and Wernick by the title “rav” — rabbi in Hebrew. At least one of his predecessors pointedly refused to use that appellation.

It was a sign of how little progress the Reform and Conservative movements have made in getting Israeli recognition and rights that the president felt that merely calling them rabbis merited highlighting.

The Israeli Rabbinate still does not recognize non-Orthodox conversions, does not allow Conservative or Reform rabbis to preside over funerals and does not sanction weddings performed by non-Orthodox rabbis. In fact, any rabbi who performs a wedding in Israel outside the auspices of the Rabbinate may be subject to a two-year prison sentence, even if the rabbi is Orthodox.

The current Israeli government has rolled back even some recent baby steps toward greater religious pluralism. The last government loosened conversion rules to allow prospective Israeli converts to convert under any municipal rabbi in Israel (still all Orthodox). That step would have allowed those with strict hometown rabbis to convert under a more flexible rabbi from out of town, but the current government rescinded it.

The rhetoric from the Israeli Rabbinate and Religious Affairs Ministry hasn’t been encouraging either. Last week, after Naftali Bennett, Israel’s minister of diaspora affairs, visited a Conservative Jewish day school in New York and tweeted that he found the students inspiring, Israeli Chief Rabbi David Lau called the visit unacceptable.

“When you go to a specific place and recognize a specific community, if it’s a community that creates distance from the Jewish people, I don’t see how you can consider that,” Rabbi Lau told a charedi Orthodox radio station. “You cannot go to a place where the education distances Jews not only from the tradition, but also from the past, and therefore from the future of the Jewish people.”

That echoed a comment Rivlin himself famously made back in 1989, when as a Knesset member he visited a Reform synagogue and referred to the service as “idol worship, not Judaism.” Rivlin has since distanced himself from that comment and made amends with Conservative and Reform leaders.

Since his election last year as president, largely a ceremonial role in Israel, Rivlin has sought to build bridges, not burn them. He has become an outspoken advocate for Arab-Israeli rights, slammed Jewish extremism and vociferously condemned Israeli racism.

“It’s important for the State of Israel to show full respect and full sensitivity to all American Jews,” Rivlin said. “Even the major differences between us are an honest expression of concern shared by all of us, whether Orthodox, Reform or Conservative.

“We can and we should argue aggressively, but from the position of respect, of fairness, without denying anyone’s Jewishness, without denying the place of one approach or another within Jewish dialogue today,” he said. “Jewish culture is a culture of dispute through listening, and that is the most important thing: to listen one to another, even if sometimes we cannot agree or we are not ready to agree.”

After the meeting, Rabbi Jacobs hailed Rivlin for being a constructive voice while noting the president’s limitations to effect legislative change, given his ceremonial role.

“Rather than just talk about it and sing about it, we have to make change happen,” Rabbi Jacobs told JTA.

Nevertheless, Rabbi Jacobs said he holds out little prospect for change under the current government, given the right-wing and charedi composition of the ruling coalition. The focus for the Reform movement during this term, the rabbi said, is to hold the line.

“We want to hold the little gains that we have and not go backwards,” Rabbi Jacobs said. “In the meantime, those of us in the non-Orthodox movements have a challenging moment both in strengthening the ties to Israel and in helping her become what she has always said she can be.”

For his part, Rabbi Wernick said that even though Rivlin doesn’t have political power, his bully pulpit gives him influence.

“If he and his staff can become voices for change, that presents more opportunities,” Rabbi Wernick told JTA. “And he’s changed even from when I first met with him as president. I feel like he’s listening. Let’s give him credit where credit is due.”