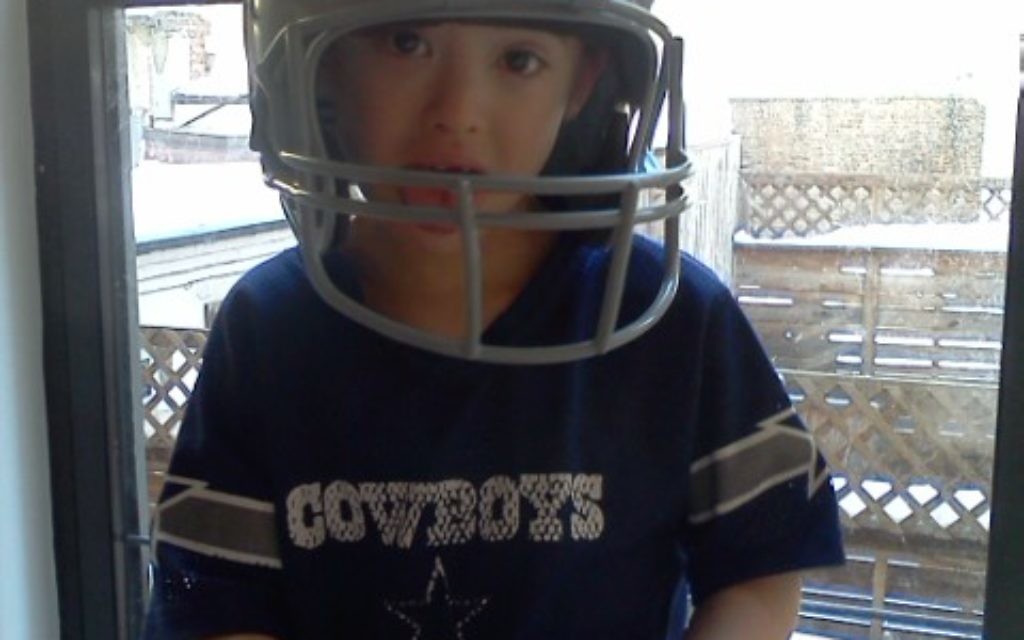 There is always a tension on Super Bowl Sunday whether to watch the big game with friends or go it alone. For me the choice is an easy one.

I watched the first quarter of the big game this year with a huge football fan and my very special football friend. His name is Yedidya and he is my oldest child. He is 7 ½ years old, has Down syndrome, and loves football. He loves it so much that he sleeps in his Dallas Cowboys uniform (confession: I helped him pick my favorite team) and unfortunately, he is constantly tackling his brothers and sister. It got bad enough that we had to teach him the mantra “no tackling.” He also can’t wait until Wednesdays when his Sports Illustrated subscription arrives in the mail, hopefully with a football player on the cover.

I enjoy streaming a game on my computer while Yedidya sits on my lap and always roots for the “red team.” Sometimes, we are lucky enough to actually have a team with a red uniform playing on the screen before us, like San Francisco in this year’s Super Bowl. Sometimes not, but that doesn’t dull his enthusiasm for the game.

Football is a raw sport and it can stir genuine emotions. In the wildcard round of this year’s playoffs, Robert Griffin III (“RG3”) the Redskins star rookie quarterback, also wearing a red uniform, went down with a terrible knee injury. Yedidya immediately pointed to the screen and poignantly exclaimed “Daddy-Sick!” He was genuinely pained by the spectacle of the player sprawled on the ground in obvious agony. Yedidya isn’t the most articulate child, but his purity of spirit and sensitivity puts him spot-on when it comes to feeling the pain of others. Watching RG3 crumpled on the ground, his very articulate father could not have expressed the moment any more succinctly, meaningfully or compassionately.

This past Shabbos, I was singing a niggun [melody] during the meal and cut my finger on my drinking glass. The adults at the table realized that it was a surface wound and thankfully no glass had penetrated the finger. Yedidya ran to the phone, picked it up and began saying “ambulance” into the phone. He doesn’t know how to call 911, and I strongly prefer he doesn’t pick up the phone unnecessarily on Shabbos, but the sentiment was incredibly touching.

I recently finished a life-altering book entitled “Daring Greatly,” by Brene’ Brown. It discusses having the courage to be vulnerable and how this perceived “weakness” can actually transform our lives. At a point in the book, she quotes Pema Chodron, a spiritual guru, who writes: “Compassion is not a relationship between the healer and the wounded. It’s a relationship between equals. Only when we know our own darkness well can we be present with the darkness of others. Compassion becomes real when we recognize our shared humanity.”

I thought of Yedidya when I read these lines. Maybe subconsciously, because he is “wounded” or “imperfect” he is able to express real compassion and potentially be a healer of sorts. It’s ironic, because many don’t perceive a developmentally disabled person as their equal. Developmentally challenged individuals sometimes lack the inhibition or cognition to hide their vulnerability, but that is what makes them our “equals” in critical moments. Imagine spontaneously expressing intense care or feelings for another while being completely indifferent to how it will be perceived by those observing.

The more esoteric sections of Jewish tradition confirm this analysis. They teach that the disabled possess a higher or more pure soul than others. They are not constrained as their physical or intellectual blemishes remove a barrier to their spiritual charisma, which is not the case in typically functioning people. The great scholar, Rabbi Avrohom Yeshaya Karelitz, popularly known by the name “Chazon Ish,” would regularly stand-up for such individuals.

Leading up to the Super Bowl an intriguing story about an avid fan came to light in the sports media. Matthew Jeffers, a senior acting major at Towson University in Maryland, wrote an e-mail late in the season to the now Super Bowl champion Baltimore Ravens, his favorite NFL team, entitled “A Reason To Win.” It was a perspective of his struggles with Skeletal Dysplasia, in relation to the struggles of winning a Super Bowl, with the ultimate lesson that, “Life is not fair, it doesn’t care about feeling sorry for yourself or self-pity. The only disability in life is a bad attitude. A positive attitude is the most positive combatant to life’s misfortunes.”

The month of February has been deemed North American Inclusion Month (NAIM) by Yachad, a division of the Orthodox Union devoted to supporting individuals with special needs. What inspires me every day is the attitude of people like my Yedidya and Matthew Jeffers. They live life without fear and they confront new challenges each and every day, with a positive attitude. In this month, when we focus on shifting our attitudes toward the special needs population, our task may just be to emulate these exceptional people in our midst.

Many of us fail to fully be there for others because we are too busy focusing on ourselves. We let the vicissitudes of life too easily knock us down. My son’s disability allows him to give others the gift of compassion and shared humanity. I choose to watch football with Yedidya over others because he not only makes me laugh with his enthusiasm and descriptions of the game, but also because he teaches me profound lessons about the game of life.

Rabbi Dovid M. Cohen of the Young Israel of the West Side in Manhattan is a member of the National Board of Yachad, an organization working to promote wider inclusion of individuals with disabilities in society. He can be reached at cohen.dovid@gmail.com