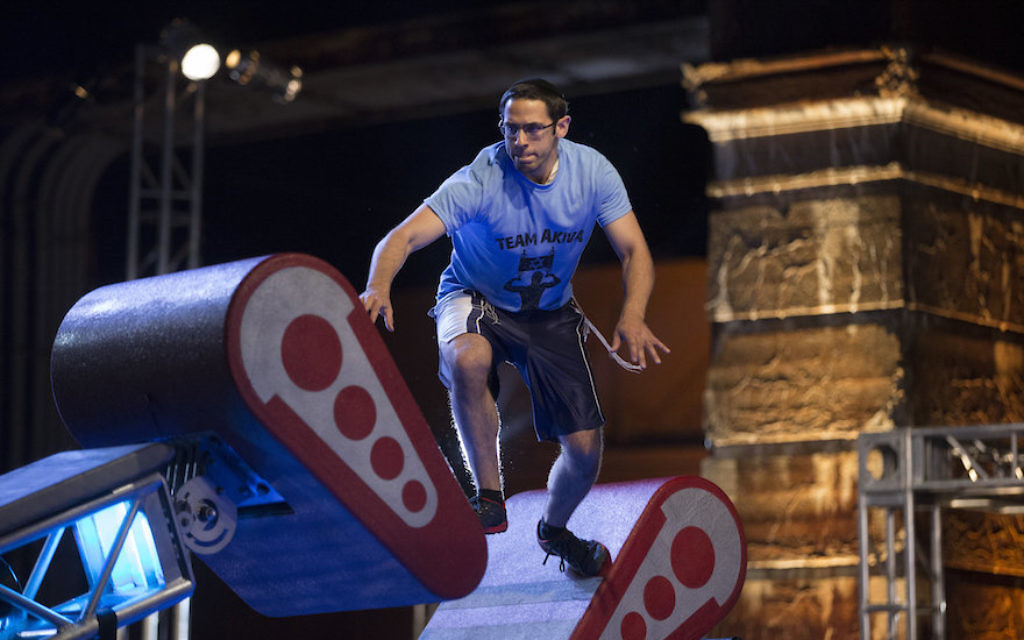 Like his fellow competitors on “American Ninja Warrior,” 25-year-old Akiva Neuman pushed himself to his physical limits — climbing, jumping and running through an intense obstacle course — in the hopes of making it to the national finals in Las Vegas.

But unlike the dozens of athletes who competed with him at the Philadelphia qualifiers, which will air June 27 on NBC, Neuman prepared by saying the Shema. He also wore tzitzit and a kippah throughout the competition.

Dubbed #ninjarabbi for the occasion, Neuman is an Orthodox Jew and rabbinical student at Yeshiva University. He will finish his smicha while he starts a full-time job at Deloitte in the fall — yes, in addition to “Ninja” training and studying to be a rabbi, Neuman is also pursuing a master’s degree in taxation at St. John’s University.

Tune in to watch the sure-to-be compelling profile of Neuman — after all, the show’s emotional, behind-the scenes stories have been parodied by Drake on “Saturday Night Live” — and to witness his supporters cheering “rabbi, rabbi,” while he shows off his strength, speed and agility.

As of press time, we don’t know whether or not Neuman, who lives in New York, makes it to Vegas. In the meantime, read on for six interesting facts about the “ninja rabbi.”

He found out about the show while at the gym.

Neuman was working out at the gym with a friend when he saw “American Ninja Warrior” for the first time. (The show, which was based on a Japanese competition, is now in its eighth season in the U.S. and has something of a cult following. In fact, The Wall Street Journal recently asked “Is ‘American Ninja Warrior’ the Future of Sports?”)

“It had my name written all over it — it’s competitive and athletic, but it’s not cutthroat, and there’s a certain level of camaraderie required,” Neuman tells JTA. (The coaches, contestants and viewers cheer each other on.)

“I thought, what’s the worst that happens? I get rejected? So what?”

Neuman also figured that being an Orthodox Jew could be his hook. He submitted a video that showed him sitting with an open Talmud surrounded by religious books; it also shows him rock climbing and running.

“I love ‘American Ninja Warrior,’” he says in his video. “But I also do this stuff because if I didn’t I’d be onshpilkes!”

But most of his working out is done at home.

Neuman says he’s always been athletic and competitive; he was the captain of the soccer and hockey teams at his yeshiva high school, where he also played basketball. But considering that he’s studying for his master’s and rabbinical ordination — and he has a young child at home — his workouts usually have to be done early in the morning or at night.

“I’m probably only working out four or five hours a week, but to build muscle it’s all about consistency, even if you’re just doing a little at a time,” he says.

In Neuman’s must-watch submission video, he’s seen at home making impressive use of a pull-up bar and doing pushups while his 6-month-old son, Yaakov Shmuel (aka Koby), reclines on an activity mat.

And he really does that stuff, he tells us.

“Just 10 minutes a day of physical activity can change your attitude, your health, and it gives you more energy,” he says.

He’s also a synagogue youth director — with an athletic streak.

“I have my days, nights and weekends covered,” says Neuman, who in addition to studying works as the youth director at the Young Israel of Holliswood in a suburban Queens neighborhood.

He’s known for getting the kids active.

“We usually start with a game, so the kids can connect, and then we go from there,” moving on to prayer or studying texts, Neuman says.

On Yom Ha’atzmaut he organized an Israeli army-style boot camp for the kids.

“He is always combining physical activity with Torah in ways that motivate and inspire the kids,” says Ronit Farber, a member of the synagogue.

“The first time we met Akiva, we had him and his wife for dinner,” says Rachel Klein, another Young Israel congregant who was one of several community members who traveled to Philadelphia to cheer on Neuman with posters that said “Team Akiva,” as well as “American Ninja Warrior” in Hebrew letters. “After dinner, his wife had to drag him home because he was busy playing soccer with our kids all over our house.”

Neuman is also a star performer in the annual Purim shpiel, adds Klein, “dazzling the audience every year with his dance moves, flips, tricks and splits.”

He takes the fact that he’s representing Jews seriously.

“I know that the general feeling is that Orthodox Jews aren’t fit — especially not rabbis. And I wanted to show that that’s not always the case,” Neuman says.

But he knows that by wearing religious garb while filming — it was his idea, and the show was fine with it — he instantly becomes a national symbol of observant Jews.

“I bear it with great responsibility, and I’m also really nervous about it,” he says.

That’s part of the reason Neuman said the Shema right before he started the course.

“I wanted one more experience to be closer to God, and was thinking, ‘You have to help me through this, because I’m not just doing it myself,’” he says.

He sees physical fitness as a matter of Jewish principle.

“We’re the people of the book, and that’s our focus. My intellectual growth — both in terms of my Torah learning and secular learning — is the focus for me, too. But we also need to take care of ourselves physically,” Neuman says.

“There’s a commandment that says we have to guard our souls, and the Rambam [Maimonides] elaborates that we’re also commanded to take care of our bodies. We’re scoring points by exercising, and fulfilling what God wants of us.”

Athleticism runs in the family — hopefully.

Neuman and his wife, Chani, grew up near each other in Highland Park, New Jersey. She’s sporty, too.

“When we were dating, we used to go to Dave and Buster’s a lot,” he says. “She always beat me in basketball.

“We keep joking that next year it’ll be the rebbetzin’s turn,” he adds.

And the two are banking on the fact that their athleticism will carry on to the next generation.

“We’re waiting for him to crawl first, but as soon as that happens, we’ll have a soccer ball at his feet,” he says of Koby. “We’re actually hoping he runs before he walks.”