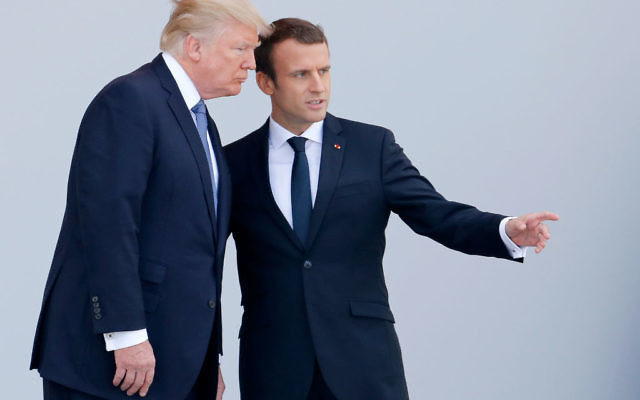 French President Emmanuel Macron gave an important speech on Sunday in Paris, with Israeli Prime Minister Netanyahu at his side, fully acknowledging his country’s guilt during the Holocaust and asserting that anti-Zionism today is the equivalent of anti-Semitism.

At a ceremony marking the 75th anniversary of an infamous roundup of 13,000 Jews at a Paris stadium, a symbol of the Vichy government’s cooperation with the Nazis, the newly elected French leader told Netanyahu that the French will “continue our fight against terrorism and the worst kinds of fanaticism,” and asserted: “We will never surrender to the expressions of hatred; we will not surrender to anti-Zionism because it is a reinvention of anti-Semitism.”

That statement, and the fact that Macron offered detailed examples of French complicity in the death of 77,000 Jews during the war — about one-quarter of the Jewish population — were particularly important in a country that has seen a dramatic rise in anti-Semitism in recent years, primarily from the right and from fundamentalist elements of the Muslim population.

Macron’s opponent in the May runoff election, Marine Le Pen, of the far-right National Front party, maintained, as do many others, that the French were the victims of the Nazis and did not collaborate with them. And though Macron was not the first French president to acknowledge national guilt for its leaders’ role — Jacques Chirac did that in 1995 — he was blunt in pointing out that “not a single German” was involved in the roundup. And he recited the names of recent victims of anti-Semitic violence in France, including the four people killed in a kosher supermarket in 2015, and Ilan Halimi, a young man who was tortured and killed in 2006. Macron also called for an investigation into the death of Sarah Halimi, a 66-year-old physician who died in April after being thrown from her apartment window by a Muslim neighbor. There have been accusations that the media covered up evidence to suggest the attack was anti-Semitic in nature.

Sadly, Macron’s condemnation of anti-Zionism was countered by an editor of Haaretz, the left-wing Israeli daily. In a tweet, Asaf Ronel, the paper’s world news editor, wrote: “Dear President Emmanuel Macron, you are wrong. Anti-Zionism is resisting the racism inherent in today’s Zionism. It’s not anti-Semitism.” He subsequently wrote that Israel has been an apartheid state since 1948.

While such national self-hatred is rare in Israel, it is all the more important for President Macron to be praised for his forthright statements about the evils of anti-Semitism, then — during the Holocaust — and now.