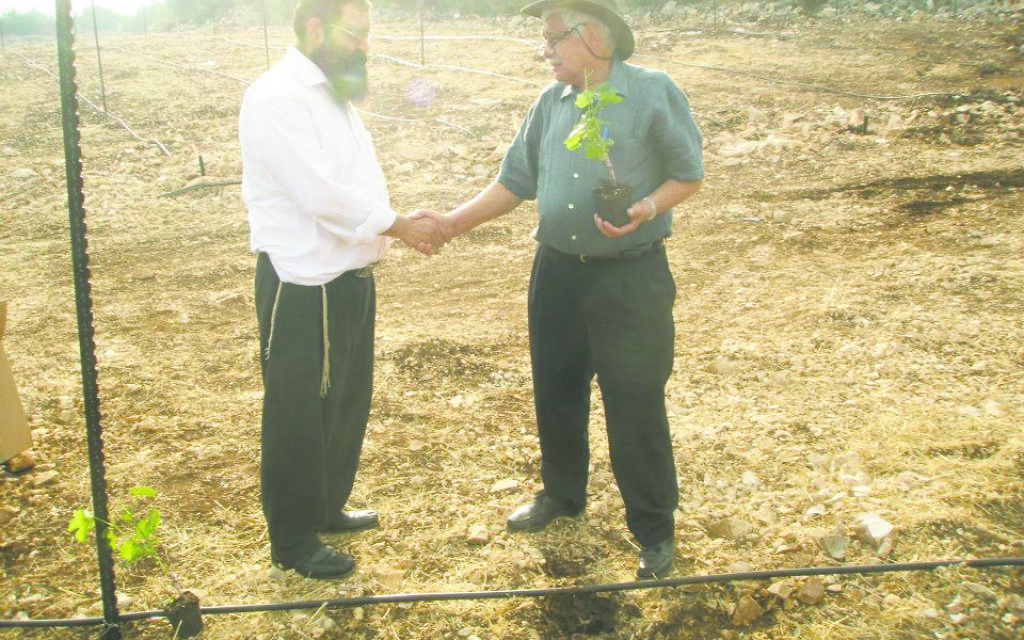 There is an iconic Tribeca restaurant known for its delicate soufflés and its old-world charm. Though the restaurant is not kosher, its wine list includes many Israeli options (18 to date) and it holds an annual Passover seder.

Capsouto Frères, the classic French bistro that recently celebrated its 32nd anniversary, is the result of the passion and hard work of brothers Jacques, Sami and Albert Capsouto, who built the place themselves after having emigrated from Egypt via Lyon, France, a gastronomy hub. Over the years, the restaurant has become a neighborhood fixture; the Capsoutos have been active in community affairs. After the 9/11 attacks, the restaurant welcomed rescue workers for meals and refuge. Following Albert’s death in 2010, a small, triangle-shaped park, formed by Canal, Varick and Laight streets was named in his memory.

Now, Jacques is delving into the Israeli wine market with Jacques Capsouto Vignobles, a vineyard in northern Israel. He recently spoke with The Jewish Week about his new venture.

Jewish Week: How did you become interested in wine?

Jacques Capsouto: We opened Capsouto Frères in October of 1980. People thought we were crazy to take the space in this neighborhood; nobody knew what Tribeca was. At that time we were crazy, but in retrospect we had foresight. Albert took care of the dining room, Sami took care of the bar, and I took care of the kitchen. When Sami got married, I took over the wine buying. I got pulled in, and I learned about wine — I went to tastings, and I started traveling to France to learn the wines.

What sparked your interest in Israeli wines?

When Sami was developing the wine list, Yarden Winery from the Golan Heights came to the United States and we carried a couple of wines from them. I did their first tasting here.

I have about 18 Israeli wines on my list. I have whites, reds, different varietals, and I also have dessert wines. I probably sell the most amount of Israeli wine for a non-kosher restaurant.

Tell me about the seders Capsouto Frères holds each Passover.

My parents were born in Turkey. In the 1980s the Neve Shalom [synagogue] in Turkey got massacred. I always wanted to do a seder in the restaurant, but I didn’t know how to do it because of the kashrut laws. So when the Neve Shalom was attacked, it clicked, and I said I would do the seder in the restaurant — I will do it for my customers; I will do my grandmother’s recipes. I will stay away from the meats, I’ll do dairy and fish; my mother gave me the recipes. And I said whatever the customers give me I will give to Istanbul.

So we paired with the Joint Distribution Committee because UJA covers their operating costs so they send everything to Istanbul. We are on our 27th year.

Why choose Israel for the site of your new vineyard?

Usually when I travel, I check wineries. The last time I was in Israel was in 1975, right after the Yom Kippur War. The daughter of my first cousin, Mili Avital, she is a famous actress in Israel, was getting married in 2004. My bothers assigned me to go to the wedding, and I took my nephew with me.

We were there about two weeks between the wedding and the wineries. I called the consulate and I got names of wineries and made my itinerary. We did about 18 wineries. I wanted to check the industry all over the country, from the Negev to the Golan.

In 2006 I was invited by the Israeli government for a wine fair in Tel Aviv, and that’s when I started prospecting.

Where will your vineyard be?

In a town called Peki’in HaHadasha [in northern Israel]. I decided against the Golan Heights because it’s controversial. I searched for places along the Lebanese border where I am surrounded by four different religions — Muslims, Jews, Christians and Druze. Like we started Tribeca [by opening the restaurant there in the early 1980s] I am starting something different in Israel.

What kind of wine are you harvesting?

When can we enjoy your wine?