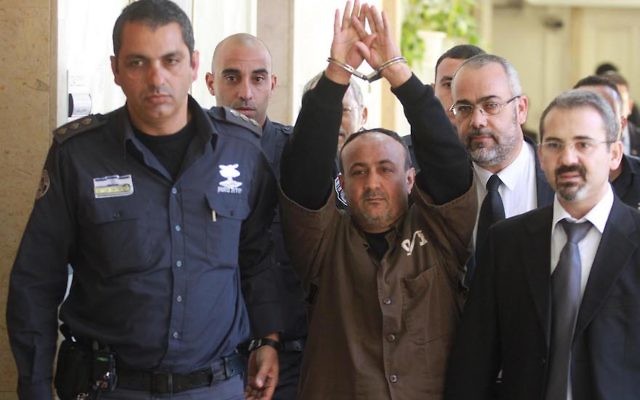 JERUSALEM (JTA) — The Israel Prison Service released a video which shows Marwan Barghouti, the high-profile Palestinian prisoner leading a hunger strike, secretly eating in the bathroom of his cell.

The hunger strike launched three weeks ago with a Barghouti Op-Ed in The New York Times. The hundreds of Palestinian hunger strikers are calling for more favorable prison conditions. Barghouti is serving multiple life sentences for the murder of five Jewish Israelis.

The video released on Sunday shows Barghouti eating in his bathroom twice, on April 27 and May 5.

“As I said from the very beginning, this hunger strike was never about the conditions of the convicted terrorists, which meet international standards. It is about advancing Marwan Barghouti’s political ambitions to replace Abu Mazen,” Minister of Public Security Gilad Erdan said in a statement following the release of the video.

“Barghouti is a murderer and hypocrite who urged his fellow prisoners to strike and suffer while he ate behind their back. Just like he lied to the world when he wrote in the New York Times that he decided to strike in order to protest ill-treatment, he lied to the Palestinian public when he claimed to be striking. Israel will not give in to extortion and pressure from terrorists.”

Abu Mazen is the nom de guerre of Palestinian Authority President Mahmoud Abbas. Barghouti is seen as a possible successor to Abbas.

Some 850 Palestinian prisoners in Israeli jails are still taking part in the strike.

Haaretz cited unnamed sources in the Prison Service as saying they set Barghouti up with the food in order to see if he was sticking to his hunger strike. Barghouti is being held in Kishon Prison, where he was transferred after he began his strike.

Barghouti’s lawyer, attorney Elias Sabbagh, told Haaretz in response to the video: “This was expected as part of the psychological and media war the Israel Prison Service is conducting against the prisoners. We can’t address the content of the clip so long as they don’t let us meet with Marwan. Let us visit him and then we will check the claims with him.”

Israeli authorities are considering bringing in foreign doctors to force-feed the Palestinian hunger strikers if Israeli doctors continue to resist taking part in the practice, as advised by the Israel Medical Association.