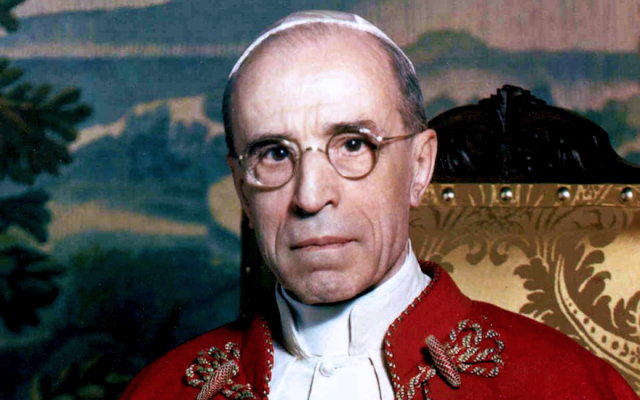 For more than six decades, Jews and Catholics have debated the legacy of Pius XII, who served as pope during World War II.

His critics, particularly Jewish scholars and Holocaust survivors, say he was indifferent to the fate of Europe’s endangered Jews, a charge that gained currency in Rolf Hochhuth’s 1962 play, “The Deputy.”

Pius’ supporters, particularly in Vatican circles, who are proposing him for sainthood, maintain that he quietly worked to save Jewish lives, ordering Catholic institutions to open their doors to Jews, often putting Catholic lives in danger.

It’s been hard to know the truth, because the personal papers of Pius and other documents from his papacy are stored in the Vatican archives, which were closed to outsiders.

A year from now, those archives will open.

Pope Francis, speeding up a process begun by his predecessor, Benedict XVI, announced this week that the Vatican archives of the wartime pope will open on March 2, 2020. That date will mark the anniversary of Eugenio Pacelli’s 1939 election as pope.

“The Church is not afraid of history,” Francis said. Historians, said Bishop Sergio Pagano, prefect of the Vatican Secret Archives, will be able to study Pius’ papacy “without prejudice, but with the help of new documents, in all the realistic scope and richness” of Pius’ time leading the Church.

Representatives of Jewish organizations that work with other faiths praised Francis’ decision as welcome, but not a surprise. Francis, who became pope in 2013, had publicly called for the archives’ opening while serving as a cardinal in Argentina.

“It’s better late than never,” said Abraham Foxman, former national director of the Anti-Defamation League. Previous popes pledged to open the archives “and made excuses” not to do it, added Foxman, a child survivor of the Holocaust.

The “Pius XII Papers” will likely not affect Pius’ chances of being declared a saint, Foxman said. “They will establish that he did more than we think he did and less than he could have done. We will find that he was not a saint and not a devil.”

“It is particularly important that experts from the leading Holocaust memorial institutes in Israel and the U.S. objectively evaluate as best possible the historical record of that most terrible of times, to acknowledge both the failures as well as the valiant efforts made during the period of the Shoah,” Rabbi Rosen said in an email interview.

The Jewish community for a long time has lobbied for full accessibility to the Pius archives. While Jewish-Catholic relations have improved in recent decades, particularly during the papacies of John XXIII and John Paul II, the cloud of Pius’ tenure remained as a constant stressor over interfaith dialogue. “It will remove an issue on the agenda,” Rabbi Rosen said. “In the end we will probably have to agree to disagree:

“I doubt that [it] will lead to agreement among Catholics and Jews about the record of Pope Pius XII as in fact we are to a large degree divided by a hypothetical question, ‘If he would have done what he could have done but didn’t do, would it have been different?’” Rabbi Rosen said. “For Catholics, the Pope is not just another individual, and for Jews the very idea that we can say that anyone did everything that needed to be done and was thus fully virtuous in such a terrible time is an anathema.”

If the Vatican had followed normal procedures, in which  a pope’s archives are opened 70 years after his death, Pius’ would have been opened in 2028. “So it’s only a little ahead of time,” Rabbi Rosen said.