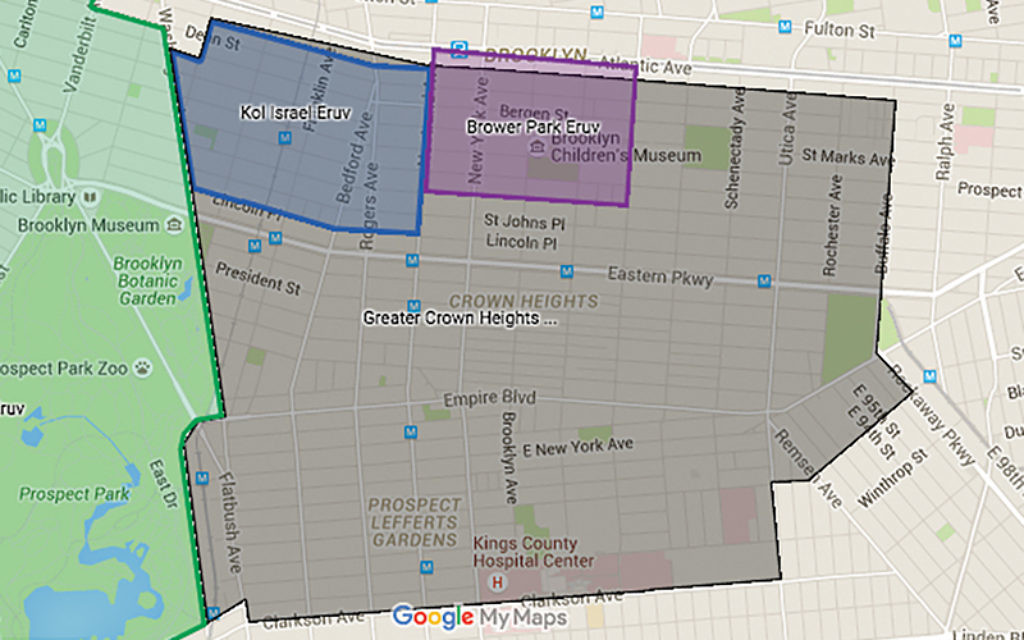 Acts of vandalism against a controversial eruv (ritual enclosure) for the third time in the three weeks since it was erected have escalated hard feelings among observant Jews in several Brooklyn neighborhoods.

“The vandals not only invalidated the Crown Heights eruv,” wrote the board of Congregation B’nai Jacob in Park Slope in a statement posted on a local news website. “They disqualified the broader eruv as well — including the eruv that covers Park Slope. This hurt our community and could have led to a mass chilul Shabbat [desecration of the Sabbath].”

According to community members, the Greater Crown Heights eruv, contiguous with the Park Slope eruv, was found broken in several places before Shabbat began last Friday.

The eruv, which allows observant Jews to carry items on Shabbat within its boundaries, is opposed by members of Chabad whose rebbe, the late Rabbi Menachem Mendel Schneerson, forbade the building of an eruv in Crown Heights.

Naftali Hanau, who serves on the eruv committee at Congregation Kol Israel, the local Modern Orthodox congregation supporting the Greater Crown Heights eruv, said he and other community members are “shocked and appalled that this is happening and strongly condemn the vandalism.” He said they are still waiting for local leaders of Chabad-Lubavitch to condemn the vandalism.

“We hope that the rabbis in Chabad who were so quick to condemn the eruv would be just as quick in condemning the vandalism against the eruv,” Hanau said. “Not saying anything when vandalism is occurring seems like tacit approval.”

He added that police are investigating the case and are working on identifying perpetrators.

Officials of the Crown Heights Beit Din (religious court) did not respond to requests for comment on the latest vandalism.

Leaders of the Chabad-Lubavitch movement in Crown Heights have unanimously condemned the eruv. “It’s self-understood that the Rebbe’s decision is final, and it is forbidden for anyone to help or support … the building of an eruv in our neighborhood,” read an earlier letter from Rabbi Avrohom Osdoba, a senior member of the Crown Heights Beit Din, or rabbinical court.

Rabbi Osdoba and another beit din member, Rabbi Shlomo Yehuda Halevy Segal, said the eruv was not kosher. Rabbi Osdoba called the erection of the eruv “the devastation of the Shabbat in our honorable neighborhood.”

A source close to Chabad-Lubavitch, speaking off the record because he believes the issue is a “Crown Heights issue” and “entirely independent of Chabad-Lubavitch,” said there is no evidence that members of the Chabad community were involved in the vandalism.

He noted that there is resentment in his community, though, because when Congregation Kol Israel, built in 1924 and considered a landmark today, fell on hard times in the 1960s and 1970s, it was the Chabad community, at the direction of its Rabbi Schneerson, who helped support and sustain it. The source said there is “a lack of hakarat ha-tov” (the acknowledgment of a favor or good deed) from the Modern Orthodox congregation, and a sense that creating the new eruv was an affront to the Crown Heights community.

“We feel they’re infringing on our community,” he said.

Hanau has said that the eruv is for those who choose to use it. “If you don’t like it, don’t carry,” he maintains, adding: “Saying that anybody using the eruv is violating Sabbath or that you can’t trust their kashrut — it’s those types of claims that will lead radical people to go out there and knock it down.”

Rabbi Shimon Hecht, who serves as both the rabbi of B’nai Jacob as well as the Chabad emissary for Park Slope, has not responded to the incident or to requests for comment.