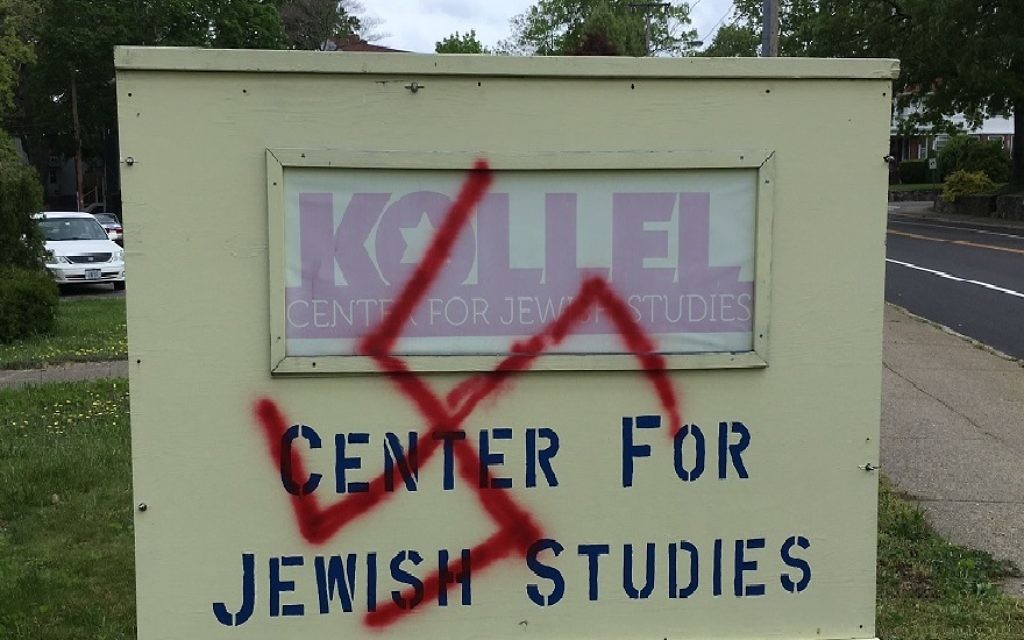 Robert Trestan said the attacks at two synagogues in the Boston area and one in Pawtucket, Rhode Island, are part of a spike in anti-Semitic incidents in the region since the start of the year.

Trestan said there is no indication the recent incidents are related, but the short time frame and proximity stand out.

“To have three synagogues targeted in a week within 100 miles of each other, that’s a real concern,” Trestan told JTA. “People are intentionally going onto a property of worship to intimidate the community.”

He said the uptick in reported anti-Semitic incidents since the beginning of 2016 — particularly in schools, but also in the community — runs from harassment to graffiti.

“The incidents already reported to us this year exceed all of 2015, with school-based incidents experiencing the largest increase,” according to a spokesperson at the New England office.

The office could not disclose the exact numbers, but the figures will be part of a forthcoming report from the national ADL.

On May 22, a large swastika was discovered painted across the sign at Temple Ohawe Sholam, an Orthodox synagogue and the only one in Pawtucket, which borders Providence.

On the same day in Beverly, Massachusetts, the words “Merry Christmas” and a large dollar sign were discovered painted on the back walls of Temple B’nai Abraham, the only synagogue in the seaside town on the North Shore of Boston. The area includes towns with many Jewish institutions and synagogues.

On May 15, a swastika was discovered painted on the parking lot of Temple Emanuel in Andover, the largest Reform congregation in the city north of Boston.

“These are acts to intimidate Jews at sacred spaces,” Trestan said. “What’s next, if people are willing to spray paint at a house of worship, how far are they willing to go to spread a message?”

The incidents should not be dismissed because the weapon of choice was a can of spray paint, Trestan cautioned.

“The message of intimidation and hate is very strong,” he said.

In Pawtucket, the incident is being investigated as a hate crime. There was no surveillance video in the immediate vicinity and no arrests have been made, according to police.

At a news conference outside Temple Ohawe Sholam the morning after the grafitti was discovered, Pawtucket Mayor Donald Grebian condemned the anti-Semitic vandalism.

“This was clearly a heinous act that will not be tolerated,” Grebian said, adding: “We are treating this as a hate crime and will be very aggressive.”

At the news conference, Grebian and the police chief joined the synagogue’s rabbi and president, as well as others from the Rhode Island Jewish community and clergy from other religious groups.

“While these acts may have brought back the horror millions of people experienced, the immediate result has been an outpouring of compassion and many acts of kindness from the community,” synagogue president David Pliskin said.

The incident jarred synagogue members, including Irving Schild, a Holocaust survivor and one of the first to discover the swastika.

“It’s a shame,” Schild told the Providence Journal. “It’s been 70 years since the end of the Holocaust and it seems that no one has really learned anything from it. It looks like it’s starting all over again.

Within hours of discovering the swastika, drivers passing by were stopping to voice concern and support, according to Marty Cooper, community relations director of the Jewish Alliance of Greater Rhode Island. One Muslim woman offered to pay for replacing the sign, Cooper told JTA. He cited the support of the state’s 7-year-old interfaith organization and other religious organizations.

The Jewish Alliance is now exploring ways to provide security cameras to synagogues.

Temple B’nai Abraham will hold a community forum on anti-Semitism on June 2 led by Trestan. Rabbi Alison Adler described the symbols painted on her synagogue as “stupid” rather than “vile.”

“But we are not painting over reactions or concerns,” she said in a statement.

Beverly Mayor Michael Cahill called for unity in standing against the hateful acts at the synagogue, saying in a statement “these criminal actions have no place in our society and no place in Beverly. We are all one.”

In another incident, on May 24, a swastika was found painted on the parking lot at a large stadium in Cranston, Rhode Island, 10 miles south of Pawtucket.