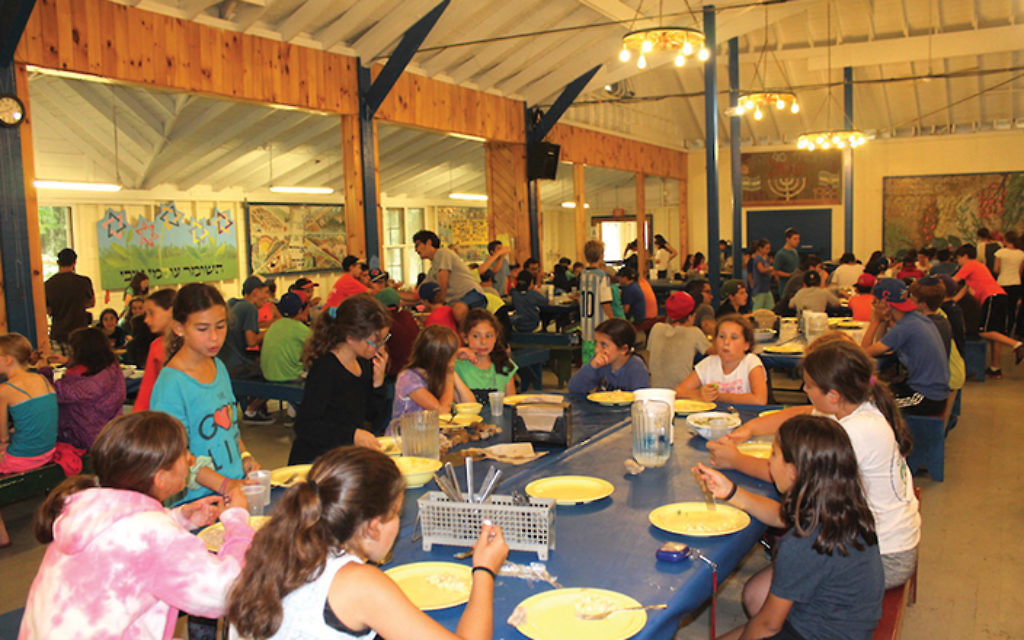 A ll of a sudden, bottles of hand sanitizer appeared all over,” said Rabbi Jason Miller, looking back at 2009, when the swine flu craze reached Camp Maas, a Jewish summer camp in Ortonville, Michigan.

“Staff members would stand outside the dining hall with bottles,” he told JTA.

Aside from constant reminders about hand washing, the swine flu didn’t leave much of a mark on the camp. And now, similar worries about contagious diseases may soon be a distant memory.

Seven years later — in a time that has seen a reinvigorated debate over the validity and efficacy of vaccines — Tamarack Camps, one of the largest and oldest Jewish camp systems in the country (of which Camp Maas, Miller’s former employer, is a part), now has a formalized vaccine policy.

“Given the overriding value of Pikuach Nefesh (saving a life) … we are requiring that all campers, staff, artists-in-residence, volunteers, doctors, nurses and their families planning to attend/participate in any Tamarack Camps programs be immunized as outlined,” according to an email sent Dec. 30 and signed by multiple Tamarack program directors.

The announcement stipulated that the camp’s attendees must receive the standard list of vaccines recommended by the American Academy of Pediatrics and the Center for Disease Control, which includes shots for chicken pox, meningitis and several others. The policy will be phased in over two years beginning this summer.

Through the email, Tamarack Camps — comprised of a main campus and Camp Maas, along with a few “outpost” camps and travel programs — joined other Jewish camps across the country that have formalized vaccine policies requiring staff and campers to be immunized according to state requirements. The policies only allow campers to forego the vaccines for medical reasons (such as an allergy).

Other Jewish camps with such policies include all those under the auspices of the Union for Reform Judaism and the Conservative movement’s Ramah umbrella, as well as many independent and specialized camps.

Some Jewish camps, however, stick to state vaccination laws, many allowing for personal or religious exemptions. California, which experienced a widely publicized measles outbreak at Disneyland in early 2015, joined West Virginia and Mississippi as one of only three states that outlaw personal or religious vaccine exemptions after passing a contested bill last summer. The vaccination rate among children in California has already risen even though the new law does not go into effect until July.

Vaccines are generally accepted as a common-sense medical practice across most of the spectrum of religious affiliation in the Jewish community. However, some Orthodox communities have experienced outbreaks of preventable diseases, such as the whooping cough, in recent years. In 2014, the prominent Orthodox Rabbi Shmuel Kamenetzky called vaccines a “hoax.” JTA found last year that a range of private Jewish day schools had low student vaccination rates due to the personal or religious exemption loopholes.

Cliff Nerwen, chair of the National Ramah Medical Committee, estimates that at least one family each year tries to send an unvaccinated camper to each of Ramah’s nine sleepaway camps.

“I graciously tell them I respect their opinions, but in the light of the larger public health community, it’s a risk we’re not willing to take,” Nerwen said.

In a sign of the times, Tamarack Camps’ announcement immediately started an online dispute. Dr. David Brownstein, the medical director of the Center for Holistic Medicine in West Bloomfield, Mich. — the upscale heart of Detroit’s Jewish community — called the policy “draconian” in a blog post the next day.

“Perhaps Camp Tamarack is unaware that over $3 billion has been awarded by the Federal Government to children and adults injured by vaccines,” Brownstein wrote. “I would like to see where Jewish law says it is safe to inject a neurotoxin into a baby or any living being.”

“Dr. Brownstein is wrong on the facts. That’s not my opinion,” Lipson wrote. “What is my opinion is that doctors like him are a threat to public health.”

Tamarack Camps’ decision also caused a bit of a stir in and around the metro Detroit Jewish community. Dr. Kathy Erlich, a Jewish pediatrician against strict vaccine laws who worked in the camp’s medical clinic, resigned. And Miller, who wrote about Tamarack’s decision for Time, said at least one family left the camp over the policy.

“Of course there are parents out there that have chosen not to vaccinate their children, and I think they always assume that either their personal or their religious reasons for not vaccinating will be accepted,” said Paul Reichenbach, the Union for Reform Judaism’s director of camp and Israel programs.

The URJ camp system issued a formalized vaccine policy in 2008.

“It came as a surprise to some people,” Reichenbach said.

Still, Lipson, who covers science and medicine for Forbes, told JTA that parents of prospective campers should not lose sleep over the medical exemption rule. Some children have legitimate medical reasons to skip a certain vaccine — and they depend on the immunity of the other campers around them even more.

As to whether or not parents should scrutinize camps that allow non-medical exemptions, Lipson said the issue is worth talking about.

“Because this is such a new question, I’m just starting to ask [it] myself,” he said. “Personal belief exemptions are a nightmare.”

Lipson pointed out that it can be tough for camps to hold their ground against parents on the vaccine issue because, while everyone has to go to school, they’re not required to attend summer camp.

That’s partly why he was impressed with Tamarack Camps’ decision to publicly state a formal position. At Camp Tamakwa in Ontario, where Lipson volunteers, campers must hand in immunization forms, but he isn’t aware of a formal written camp policy.

“I was actually kind of surprised that [Tamarack] did it,” Lipson said. “You put a bunch of Jews in a room, and what are the odds you’re going to get a consensus?”

This article is part of JTA’s special section on camps, made possible with funding from the Foundation for Jewish Camp, examines trends affecting Jewish overnight camps.