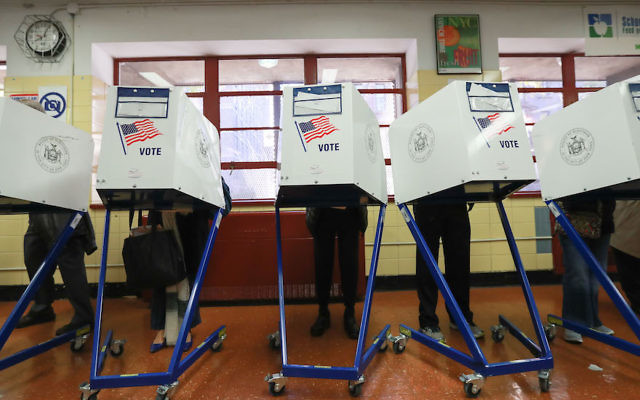 With the national elections just around the corner, it’s important that the Jewish community truly check in with ourselves about how we approach critical moments of political conscience.

First, there is a line of argument that I often hear that there should be a “church-state” separation between the sanctuary and the greater society. A synagogue is a place of study and prayer, some people say. “Rabbi, stick to plowing your own field.”

Yet, as I have previously written — including my public disagreement with Rabbi David Wolpe in Jewish Journal about the subject– our communities, including synagogues and schools, are not private places, but public ones where our values are brought into the community.

The God of the Bible is not Republican, Democrat or Libertarian. God is, however, is eminently political. Politics is the art of using power, and God is deeply concerned with the way we wield our power. The priest of the Bible was instructed in the methods of ritual sacrifice, but he was commanded to also “Leave the corners of your field for the widow, the orphan, the stranger..”  The prophets cared less about the power of God than powerlessness of the poor and weak. The rabbis taught that we must respect the government’s authority, and even be fearful of it, but never to ignore it.

There’s no containing God’s Presence to a single place or time.  There is no separation or disjunction between the ritual and the ethical.  Between liturgy and morality. Between a community’s theology and a community’s public life.  God cannot be segregated behind the parochet. Judaism and the political are not separate but equal.  They are one and the same because religion is not a refuge from society, but a launching pad into society.

Judaism should not determine affiliation with any party.   Politicians and pundits on both sides of the aisle will quote the Bible to further their own agenda.  Each side relies on a type of theological redistricting that easily cuts out the passages that offend them. We have to ask, what remains of our Torah if it is gerrymandered to the point of being unrecognizable by those who disagree with us? It seems to me that if the Torah is given over in totality to overtly political considerations, we would render as void its utility to challenge and inspire us.

I do not think that we can only shape the Torah into what we want it to be.  We need slow and deliberate interpretation, even if we as a community come to new conclusions. I know the arguments for following the law, for obeying God’s command, for respecting the government, of protecting our homeland, for creating an environment of prosperity – all of which are found in the Torah.  I know that there are issues of identity that separate us from others and ourselves, that God can be jealous and wrathful, but there is inside of us this incessant demand for justice that calls out to my conscience.

The Bible is meant to destabilize our comfort and shake up our complacency.  It fills us with both love and guilt simultaneously. It makes us feel unsettled. It makes me uncomfortable. That is the nature of the Divine voice inside of us. Why, we must ask, should the rabbis of today be any less radical in their interpretations of the rabbis of the past?   On what basis shall we interpret Torah? I would argue as my teacher Rabbi Harold Schulweis taught me that “Conscience is the duty to obey and the duty to disobey.” Conscience is what the Torah cultivates.  As the Talmud says, “those who have the ability to protest the sin of the world and do not are liable for the sin of the world.”

Conscience is the duty to bend and even to break laws that go against the most fundamental of covenantal promises — to be created in the image of God.  For when seeing the cries of innocent children, God shouts and cries and is not silenced. God is not in the monastery or yeshiva. God is among all the people.

Judaism and the synagogue have a duty to cultivate conscience.  To remind us that there is more to public life than political strategy. The Torah is not a book of means as much it is a book of sacred ends. The Torah is not a book meant to win elections.  I will not tell you who to vote for, but that you must vote your conscience. Whatever our partisan politics, the underlying spiritual question remains, whether we succumb to our lower selves and turn our backs on those who suffer, or retain our hard-earned fidelity to the Jewish covenant of conscience.

Before you cast your vote, ask yourself what is sacred about this moment? What does the Divine in me say to do? The voting booth is a holy space where values meet policy. And when you make your choice, you may choose the same blessing that some in my community say before reading Torah: “Adonai Imachem” “Yevorcheca Adonai” (Ruth 2:4).  “God is with you, May God be blessed.”