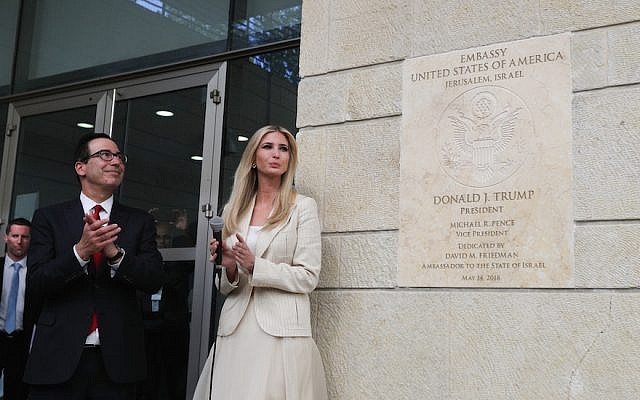 Steven Mnuchin, US Secretary of the Treasury, and daughter of President Donald Trump, Ivanka Trump, revealing a dedication plaque at the official opening ceremony of the U.S. Embassy in Jerusalem, May 14, 2018. (Yonatan Sindel/Flash90)

JERUSALEM (JTA) — The United States closed its consulate in Jerusalem and folded its operations into the new U.S. embassy in the city.

While the decision “does not signal a change of U.S. policy on Jerusalem, the West Bank, or the Gaza Strip,” according to the U.S. State Department, critics said it signals a further downgrading of formal ties to the Palestinian Authority.

The U.S. State Department made the announcement in a statement on Sunday, saying that the move would take effect on Monday.

The Jerusalem consulate located on Agron Street near the Old City of Jerusalem had served as a diplomatic mission to the Palestinians. It will now serve as an adjunct to the Embassy, located in the center of a Jewish residential neighborhood of Jerusalem.

A U.S. Embassy Palestinian Affairs Unit will continue to operate from the historic Agron Road location, the statement said, which will “engage in a wide range of reporting, outreach, and programming in the West Bank and Gaza Strip, as well as with Palestinians in Jerusalem.”

“Our State Department and interagency teams on the ground do exceptional work every day in representing the United States to diverse audiences, reflecting their views back to Washington, and assisting American citizens. That critical work will be enhanced and will continue uninterrupted as we form a larger team,” the statement said.

The decision to merge operations was “driven by our global efforts to increase the efficiency and effectiveness of our diplomatic engagements and operations. It does not signal a change of U.S. policy on Jerusalem, the West Bank, or the Gaza Strip,” the statement said.

“The United States continues to take no position on final status issues, including boundaries or borders. The specific boundaries of Israeli sovereignty in Jerusalem are subject to final status negotiations between the parties,” it also said.

In a statement welcoming the move, Israel’s ambassador to the United Nations, Danny Danon, suggested the move was of a piece with the Trump administration’s decision to recognize Jerusalem as Israel’s capital and move its embassy there from Tel Aviv.

“Today, the #US consolidates its Jerusalem consulate with its embassy in #Israel’s undivided and historic capital city,” he tweeted. “We thank our strongest ally for this move!”

“The U.S. administration had a choice to build constructive relations with the Palestinian people and leadership. Instead, it chose bullying and arrogance,” Maliki said in a statement.

“All U.S. Presidents until Trump understood its importance as our bridge to the Palestinian people. I was proud to serve there in the 1980s,” he tweeted.