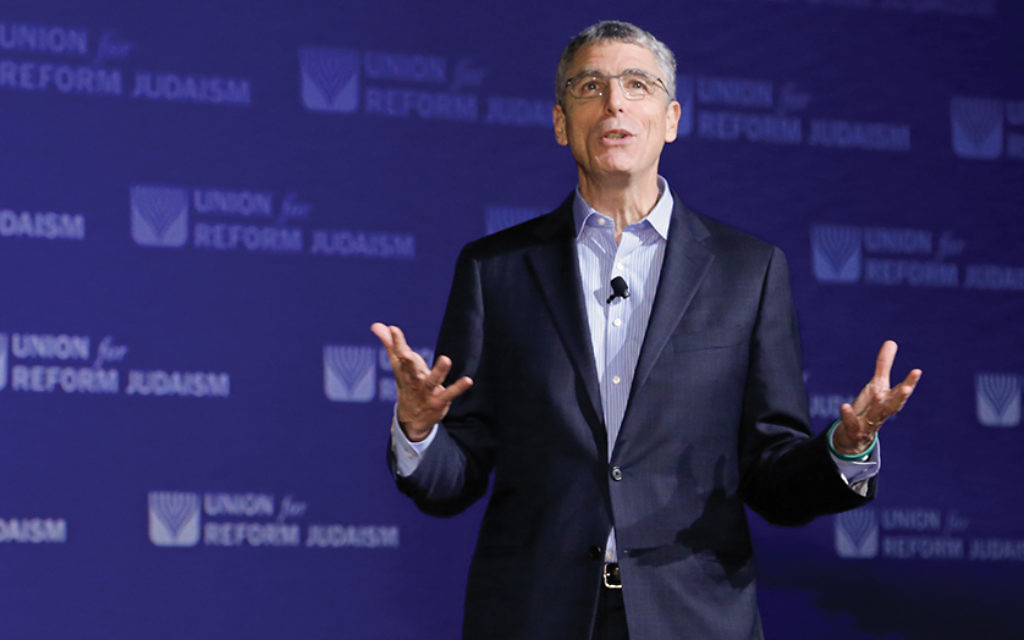 He hit them right at their strongest — and weakest — point.

All the social justice issues of the day were there on the agenda at last week’s Reform Biennial — the post-Ferguson race wars, climate change, immigration reform, gender equality. Tikkun olam was everywhere at the Orlando World Center Marriott in Orlando, Fla., as 5,000 Reform Jews gathered in a spirit of repairing the world; it is the glue that cements the faith of many Reform Jews.

But as his flock sat rapt, Rabbi Rick Jacobs, the leader of the Reform movement, Judaism’s largest denomination by a mile, delivered a pointed warning last Thursday night at his keynote address: tikkun olam divorced from tradition is doomed to fail.

“Social justice not grounded in text and ritual is ephemeral and unsustainable,” exhorted Rabbi Jacobs, as he paced the stage and gestured dramatically. “Like a bouquet of fresh flowers, it is destined to dry up and wither. It cannot be easily passed down to the next generation.”

The Biennial, the Reform movement’s largest gathering, this year attracted delegations from more than 500 congregations including 450 rabbis, 250 congregational presidents and 120 cantors. Rabbi Jacob’s keynote is usually a highlight of the Biennial, often setting the movement on a new path; last time around he articulated the concept of “audacious hospitality,” pushing the movement to be as welcoming as possible to those who might be considered outsiders. That philosophy reached a high-water mark in Orlando when the movement adopted what is believed to be the most far-reaching resolution on transgender rights of any major religious organization.

But this time around, Rabbi Jacobs cut to the heart of a debate in Jewish circles about the application of Jewish values.

Reform continuity, and the danger of “universalism at the expense of particularism,” in the words of Rabbi Jacobs, became a focus of the conference, even as breakout sessions focused heavily on the social justice issues of the day.

In recent years, the Reform movement, which once prided itself on a departure from traditional observance, or halacha, is slowly moving back towards the center. The new Reform High Holiday prayer book, or machzor, released earlier this year, includes significantly more Hebrew and traditional liturgy than versions past. The same holds true of the most recent Reform siddur, “Mishkan T’filah,” released in 2007 and used in URJ-affiliated congregations around the world. Morning and evening prayer services were held every day of the conference, and on Shabbat a kosher option was available. And while “classical” Reform rabbis sometimes shunned kipas, at this year’s conference they were seen generously sprinkled throughout the crowd, on male and female heads alike.

The Reform movement appears healthy — the 2013 Pew Center’s “Portrait of American Jewry” found that 35 percent of American Jews consider themselves Reform, more than Orthodox, Conservative and “Other” combined (Jews who don’t identify with any denomination make up the remainder). However, new findings from the 2014 Pew “Religious Landscape Study” leave room for concern. Results show that the U.S. public overall is becoming “less religious,” with Pew’s 2007 “Religious Landscape Study” finding that 83 percent of adults surveyed would describe themselves as religiously affiliated, compared with 77 percent in 2014. The growth in non-affiliation is driven largely by the millennial generation, those born between 1981 and 1996, according to the study.

A broad, humanitarian focus aids the movement’s popularity, said Rabbi Jacobs. While those who “claim a monopoly on Jewish authenticity” — the Orthodox — pay fastidious attention to kashrut, Shabbat observance and making sure there is no chametz on Passover, said Rabbi Jacobs, there is too little concern for more universal concerns, including income equality and the rights of Arab citizens in Israel.

“Prophet Amos railed against divorcing ritual observance from public and private ethics,” said Rabbi Jacob, quoting scripture to thundering applause from the crowd. “Our movement believes it is impossible to detach tikkun olam from serious Judaism — that sets us apart.”

Still, wooing the next generation of Reform Jews solely with a mission of social justice, a message that speaks to a demographic that is seeking meaning but is increasingly skeptical of organized religion, could come at a serious price.

That tension was a recurrent theme in the breakout learning sessions over the course of the five-day Biennial, as educators exchanged challenges and successes regarding engaging the next generation of Reform Jews.

Allison Levin, a youth department volunteer at Congregation Beth Or in Maple Glen, Pa., co-led a session on innovative models of synagogue-based youth engagement. The 1,000-family Montgomery County synagogue has a thriving youth department, with 600 children from kindergarten through 12th grade. The key, she said, is re-establishing the synagogue as a “social center” for children and parents.

“It’s too common for parents to view synagogue as a temporary obligation for their kids, and then disappear after the bar or bat mitzvah,” she said. Creative programming for young children, including “Munchkin Minyan,” a prayer service for tots and their parents, has the potential for lasting power. “Parents are looking for community as much as their kids.”

April Baskin, URJ’s new vice president of “audacious hospitality,” the movement’s catchphrase to describe an aggressive new outreach initiative, gave several sessions over the course of the conference about embracing multiracial Jews. The conversation, which touched on racial profiling, police violence and the recent protests in Ferguson, Mo., blended the movement’s push for social consciousness with the prerogative of engaging new members.

“Jews of color are perpetual strangers in Judaism,” said Baskin during a session titled “I’m Not a Custodian, I’m a Congregant: Embracing Racial Diversity in the Synagogue.”

“Rarely does a Jew of color walk into any space and know they’ll be treated as a Jew, rather than as an outcast or even a source of danger,” she said.

Baskin, from a multiracial background herself, used a continuum to describe the experience of many Jews of color, who, according to studies, now make up about 10 percent of the Jewish population. The spectrum of self-identity ranged from “outcast” and “foreigner” to “visitor,” “token member” and finally, “member.”

“Ensuring that Jews of color feel comfortable in our holy spaces will advance our principles of inclusion and tikkun olam, and expand our membership,” said Baskin.

Similarly, in a resolution affirming the equality of transgender people and welcoming them into congregations, camps and other Reform Jewish institutions, the movement made clear its commitment to present-day issues of public concern. The resolution passed unanimously on the second day of the conference; it was the only item from the five-day conference to generate headlines in mainstream media.

“This is who we are as a movement,” said URJ Chairman Stephen Sacks. “We were the first movement to welcome gays and lesbians into our communities: this resolution is the next step.”

In a session called “Beyond Bathroom Signs,” Rabbi Erin Mason, director of the URJ’s Camp Newman in Santa Rosa, Calif., spoke about the camp’s decision to open its doors to transgender campers and counselors, a move it kept quiet for the past two years in order not to upset parents.

“Now that this resolution is passed, we can be open and proud of our decision,” said Rabbi Mason, who described the staff’s decision to accommodate one camper who preferred the pronouns “they/their/them” to any gender-specific pronouns.

“I’m really proud of the movement,” said Adam, 16, a leader in the Reform movement national youth group, the North American Federation of Temple Youth (NFTY), who asked us to only use his first name. “I think passing a resolution like this demonstrates a deep social consciousness and an understanding of what the younger generation cares about.”

In addition to the movement’s bid to win over young souls by taking a stance on contemporary issues, Danny Meyer, CEO of Union Square Hospitality Group (well known for the hamburger super-chain Shake Shack) and a panelist at the conference, gave some hard-won advice about truly successful “audacious hospitality.” (Meyer’s recent bestselling book, “Setting the Table,” discussed the power of hospitality to transform a business.)

“Success is 49 parts how good you are at what you do, and 51 parts how good you make people feel,” he said. Institutionalized religion makes the grave error of believing they have a captive audience, he said. “Don’t make the mistake of thinking young people need you,” he added, quipping that after this word of advice he would start to charge. “Hospitality is different than service. You have to give young people a reason to stay.”

That “reason to stay,” Rabbi Jacobs stressed, has to marry Jewish tradition with a deep caring for those outside the community, in a way that perhaps only Reform Jews can do.