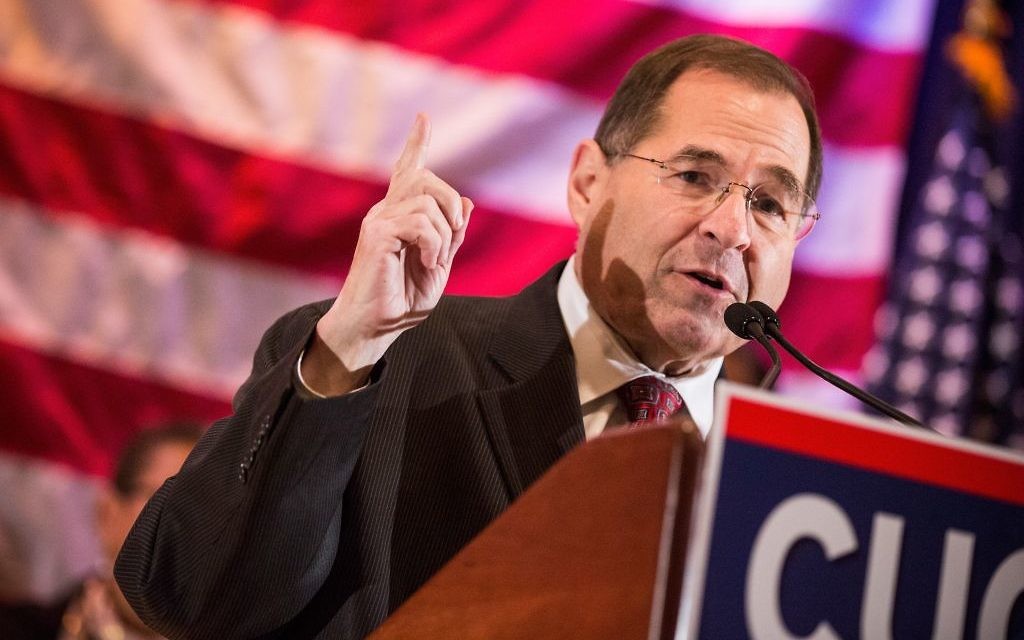 Update, June 29: Rep. Jerrold Nadler beat challenger Oliver Rosenberg by a wide margin: 24,000 to Rosenberg’s 2,700. However in the Brooklyn portion of the district, the votes were nearly split between the two, likely a result of anger over Nadler's support of the Iran deal among Orthodox Jews living in Borough Park.

For the first time in two decades, Rep. Jerrold Nadler will be facing a challenger in Tuesday’s Democratic primary — one who has the support of a major newspaper and at least one celebrity.

Nadler, 69, was the only Jewish Democratic member of Congress from New York to support the Iran nuclear deal (although the majority of Jewish members of Congress voted for the deal nationwide). The deal was strongly opposed by the Israeli government and nearly half of all American Jews, especially Orthodox Jews, who protested his vote vigorously.

Nadler’s opponent, a former Republican who has never held political office, is 30-year-old Oliver Rosenberg, a Yeshiva University graduate and former investment banker who founded Prealth, a healthcare tech start-up that is developing a medical cost-comparison app. Rosenberg, who was named to The Jewish Week’s 36 Under 36 list in 2015, grew up in a Modern Orthodox family in Los Angeles. Two years ago, the openly gay Upper West Sider founded Or Chayim, which holds monthly Orthodox-style Shabbat services and dinners for LGBT Jews and their allies.

While Nadler, who is serving in his 12th term, has received numerous endorsements, including from The New York Times and the League of Conservation Voters, The Daily News encouraged readers to vote for Rosenberg as a way of protesting Nadler’s vote on the Iran nuclear deal. Rosenberg, whose chances of winning against a popular incumbent is considered a long shot, was also endorsed by comedian Jackie Mason, who recorded two 30-second robo-calls for Rosenberg that debuted last week.

Rosenberg is vying to take over Nadler’s seat in the highly gerrymandered 10th Congressional District, which, at an estimated 27 percent, encompasses the greatest percentage of Jews in the country. The district, which is roughly 18 miles long, includes the heavily Jewish neighborhoods of the Upper West Side, Borough Park, Kensington and Gravesend. It also includes the LGBT-friendly neighborhoods of Chelsea, Hell’s Kitchen, SoHo and Greenwich Village as well as large parts of Tribeca, the Financial District, Battery Park City and Bensonhurst.

While Rosenberg’s challenge to Nadler followed uproar among Orthodox Jews over Nadler’s vote for the deal, he did not initially mention the Iran deal when he faced off against Nadler on “The Brian Lehrer Show” Monday morning on WNYC Radio. Rather, he focused on New York City’s rising rents, which he claimed are causing the city’s unique businesses to close.

“I can’t get my bagels and schmear. We want our bagels back.”

Rosenberg also said he was running because “the subways are Third World” and, borrowing a slogan from former mayoral candidate Jimmy McMillian, because “the rents are too damn high.”

Rosenberg ended his opening (and closing) statements by quoting Alexander Hamilton (or at least Lin-Manuel Miranda). “As Alexander Hamilton says: ‘This is not a moment, this is the movement … rise up, rise up’ and vote,” he said.

When Lehrer steered the conversation to the Iran deal, asking Rosenberg directly whether Nadler’s vote on the Iran deal is the reason he’s running, Rosenberg responded: “The main reason are the issues of the people of New York … And yes, Congressman Nadler supported a disastrous $150 billion deal that — there are terrorism groups operating in New York State like Hezbollah that are funded by Iran and I feel it makes all of us less safe.”

Nadler defended his vote, saying: “The fact of the matter is that Iran is an enemy and they do support terrorism and they will continue to do it. But they will be far less dangerous of an enemy without nuclear bombs than with nuclear bombs.”

Noting that the Iran deal was supported by former Israeli Defense Minister Moshe Ya’alon and current chief of staff of the IDF, Gadi Eizenkot, Nadler said, “This deal will make sure that Iran doesn’t get a nuclear bomb for 15 years and then, after that time period, will put an American president in a better position to prevent it than before.”

He also argued that Iran was going to get the money (which he put closer to $50 billion) whether or not the Iran deal passed because the money, which belongs to Iran, is being held by Asian banks, which said they would give Iran the money back right away if the U.S. voted against the Iran deal.

Rosenberg responded with more criticisms of the Iranian regime: “The Iran deal that Mr. Nadler voted for supports a regime that kills gays, wants to blow Israel off the map and sponsors terrorism around the world.”

Nadler then went after Rosenberg for changing his party affiliation, calling him a “Democrat of convenience” because he was a registered Republican until 2012 and continued to post pro-Republican tweets as late as 2014. Nadler read out three:

“March 2014: The American people will be begging in 2016 for a Republican candidate: Petraeus, Jeb, Dick Cheney.

“August 2014, He promised change we can believe in, and he’s been the most partisan president in history. Impeach this clown.

“Sept. 2014 Thanks Ari Fleisher for today’s tweets. Nostalgic for George Bush. Get the bastards.”

Rosenberg responded that up until recently he was “a Democrat trapped in a Republican body,” and that his platform is clearly that of a Democrat.

Nadler cited his record, which, he said, includes being an early sponsor of the USA Freedom Act, which repeals some of the Patriot Act; an author of the Respect For Marriage Act, “which was the foundation on which the Supreme Court guaranteed marriage equality”; and an author of the reauthorization of the Zadroga Act, which provides medical care and compensation for 9/11 first responders and survivors. He also noted that he “stopped the Republicans from pulling mass transit funding” out of the most recent transportation bill, and was one of the leaders of last week’s Democratic sit-in on the House floor, which demanded a vote on gun control legislation.

“It’s very easy to come in and say: ‘There are problems.’ If course there are problems, we have a Republican Congress … but my opponent hasn’t suggested specific answers,” he concluded.

Rosenberg responded that he’s “proud not to be a career politician.”

“For the first time in 20 years you have a choice. You go out on the street and all you see are Duane Reades and vacancies. The rents are too high, the local businesses are closing, you can’t get your schmear. … It’s time for new ideas, new approaches, action not talk.

“I’m not a career politician. I’m not owned by the machine, or the special interests — I get things done. It’s time for new blood. This is not a moment, it’s the movement. Rise up, rise up and vote. Vote for change on June 28.”

The winner of the primary will face Republican challenger Philip J. Rosenthal, an attorney and physicist, in November.

Correction, June. 28: A previous version of this article mistakenly said that Rep. Nadler was the only Jewish Democratic congressman to vote for the Iran deal. This is incorrect. He was the only one from New York, but nationwide, a majority of Jewish members of Congress voted for the deal.