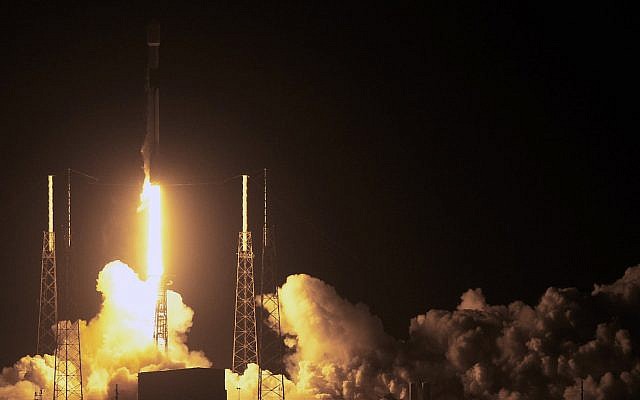 Bound for the moon: The liftoff last week of Israel’s Beresheet lunar lander at the Kennedy Space Center in Florida. Getty Images

The news media around the world reported on one of Israel’s proudest Start-Up Nation achievements and most disturbing political trends in the span of a few hours this past week.

Last Thursday, as Sarah Friedman reports in her first-person piece, Israel sought to become only the fourth country to send a robotic landing craft to the moon (see story here). The effort and expertise — and sheer chutzpah — for Israel to seek to join the U.S., Russia and China in this endeavor speaks volumes about the remarkable achievements the Jewish state has made in its short history. Small in size, never knowing a day of peace in a region of chaos and hostility, Israel has captured the imagination of so many admirers for its leading role as an innovator in many aspects of science, technology, cyber security, medicine, entrepreneurship and more. Some attribute it to an embattled society that must fight above its weight class to survive while others note that the citizens’ army experience allows for failure in promoting creativity. Whatever the reason, Israel is a world leader and a source of great pride to Jews around the world.

The fact that Israel is a vibrant democracy in a region of despots and violence adds to its reputation. But when Prime Minister Netanyahu brokered a political deal last week that could bring Otzma Yehudit, a fringe, ultra-rightist party comprised of devotees of the late Rabbi Meir Kahane, into a ruling coalition after the national elections in April, there was a sense of shock, embarrassment and fear among even the most fervent supporters of Israel (see story on page 1). And deservedly so.

Otzma Yehudit is seen as a successor to Kahane’s Kach Party, which advocated forced expulsion of Arabs from Israel and called for banning sexual relations between Arabs and Jews. The Kach Party is considered a terror organization by the U.S. and was banned from the Knesset in 1988 for policies deemed racist. Kahane was assassinated in New York in 1990.

In a rare rebuke of Jerusalem, two major Jewish organizations, AIPAC, the largest and most loyal of pro-Israel lobbying groups, and AJC, one of the oldest and most respected Jewish advocacy groups, condemned the move. On Thursday AJC released a statement calling the party “reprehensible.” The next day AIPAC retweeted AJC’s statement, calling the group both “racist and reprehensible.”

The prime minister’s effort to have Otzma Yehudit join the Religious Zionist Jewish Home Party and bolster the right-wing’s chances of victory suggests that he is deeply worried about the election’s outcome. (It also reflects how far to the right the Religious Zionist movement has gone of late.) Netanyahu may be indicted soon on one or several charges of corruption, and the pairing of former Gen. Benjamin Gantz and Yair Lapid has resulted in soaring numbers for their new Blue and White party in the polls.

Netanyahu’s latest political maneuver recalls his tweet on the day of the last election, in 2015, asserting that Israeli Arabs were voting “in droves” as a means of getting out the right-wing vote. The charge proved not to be true, and he was sharply criticized for his action, but it probably helped him win.

This week Netanyahu lashed out at critics for “hypocrisy and double standards from the left,” charging that in 1993 the ruling Labor coalition relied on Arab-Israeli parties to pass the Oslo Accords. His supporters, including the National Council of Young Israel and the ZOA in the U.S., argue that the ends justify the means. They say Netanyahu needs to ensure his victory to keep Israel secure.

But whether or not the prime minister will be indicted for corruption, he has seriously damaged Israel’s reputation by leading it down the path toward racism. As author Yossi Klein Halevi told The Jewish Week’s Write On For Israel students in Jerusalem this past week, Netanyahu has proven a master in protecting Israel externally but “he is eroding Israel’s most important relationship, with American Jewry, and undermining our democracy.”

Even a moon launch can’t distract us from this dangerous threat to Jewish values of humanity and equality.