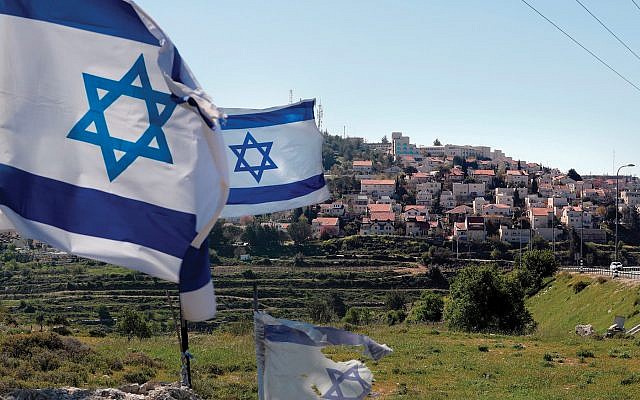 Israeli flags in front of a partial view of the West Bank settlement of Efrat. Israeli sovereignty over the settlements could enflame tensions with American Jews. Getty Images

A Jewish community already deeply divided over President Donald Trump and the rightward push of Israel’s ruling coalition is at risk of an even sharper rupture as it grapples with Prime Minister Benjamin Netanyahu’s pledge to annex Israeli settlements in the West Bank.

While Orthodox groups remain largely mum, other groups that represent a majority of U.S. Jews — and even staunch Jewish supporters of Israel in Congress — are saying such a move would derail chances for a two-state solution.

Several Jewish groups voiced their concerns in a letter to the president. They asked that his administration base its upcoming peace initiative on a negotiated two-state solution and to express its “opposition to unilateral measures outside of this framework, including annexation by Israel of any territory in the West Bank.”

It said that such annexation — in whole or in part — “could destroy any chance of a negotiated two-state solution between the parties … create intense divisions in the United States and make unwavering support for Israel and its security far more difficult to maintain.” It added that the move would also “galvanize efforts of the Boycott, Divestment and Sanctions movement that are intended to isolate and delegitimize Israel.” 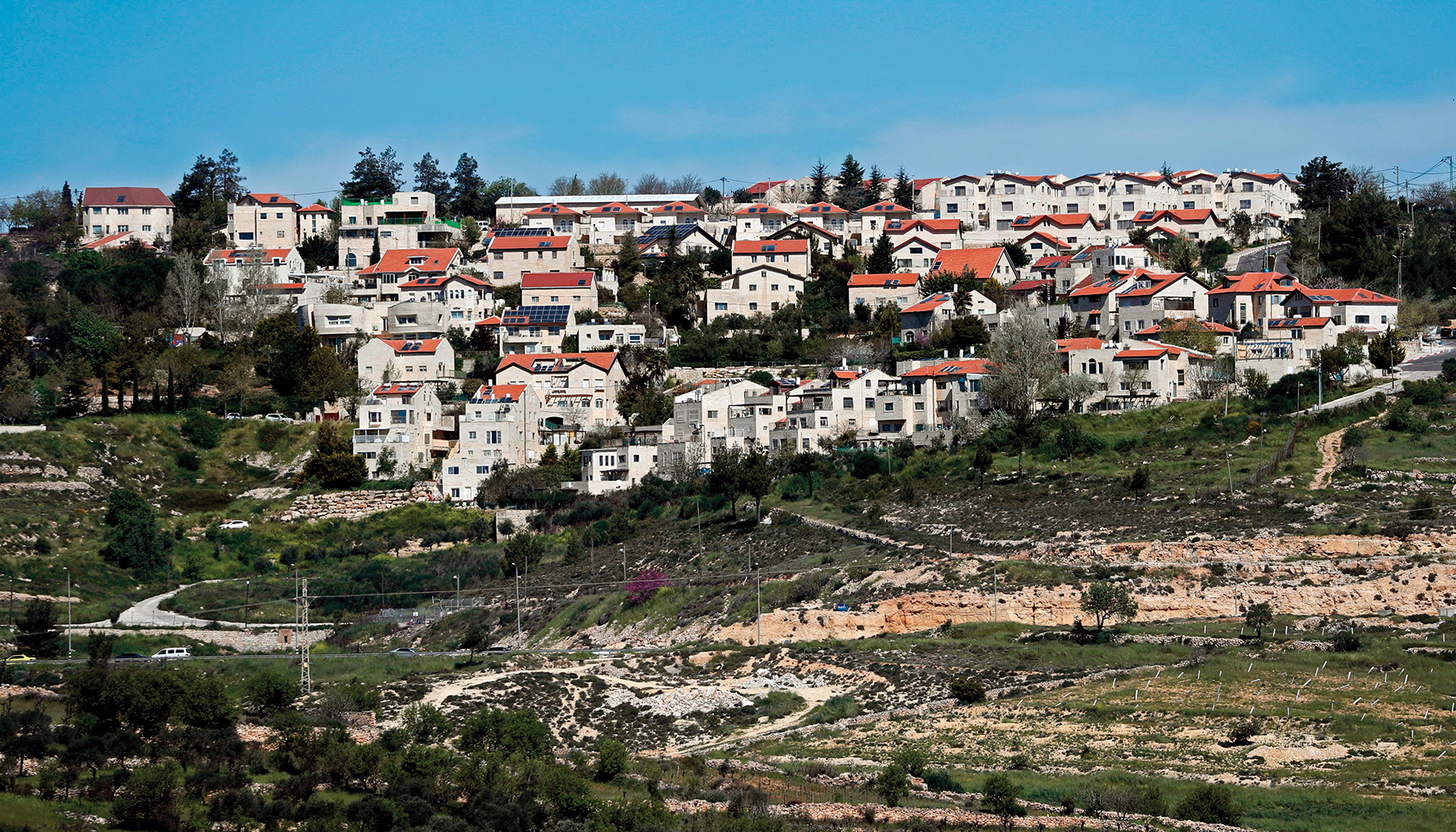 The Israeli settlement of Neve Daniel near Bethlehem. Prime Minister Netanyahu’s pledge to annex all West Bank settlements has touched off a fierce debate in the Jewish community. Getty Images

Signing the letter were the Central Conference of American [Reform] Rabbis, its Union for Reform Judaism and Association of Reform Zionists in America; the United Synagogue of Conservative Judaism and its Rabbinical Assembly and Mercaz, its Zionist affiliate. Also signing were the Anti-Defamation League; Ameinu, a liberal Zionist group; the National Council of Jewish Women; and the Israel Policy Forum (IPF), which supports a two-state solution.

Four Jewish House members, all Democrats, issued a statement that did not mention Netanyahu by name but expressed concern about “the possibility of Israel taking unilateral steps to annex the West Bank. … Two states for two peoples, negotiated directly by the two sides, with mutually agreed upon land swaps, is the best option to achieve a Jewish, democratic, secure Israel living side-by-side with a democratic, de-militarized Palestinian state,” said the statement signed by Reps. Eliot Engel and Nita Lowey, both of New York, Ted Deutch of Florida and Brad Schneider of Illinois.

In response to the letter to Trump, 21 pro-Israel organizations sent their own letter to the president thanking him for his “ongoing support for Israel’s self-determination and its right to defend and protect itself” and expressing “distress” over the letter sent by the other Jewish groups. Among the signatories were the Zionist Organization of America (ZOA), the Coalition for Jewish Values, Americans for a Safe Israel, Endowment for Middle East Truth, and the Republican Jewish Coalition.

In their letter, they wrote: “Left-wing groups have a long and well-documented history of pressuring Israel into making terrible decisions which have cost countless Jewish and Arab lives. If these letter-writers truly wish to influence the government of modern Israel, this is easily accomplished … by moving there and casting a ballot in its next election.”

Lara Friedman, president of the Foundation for Middle East Peace, criticized the House members’ statement from a left-wing position.

“Where have those concerned about de jure annexation been while Israel has been systematically de facto annexing the West Bank?” she asked.

David Halperin, executive director of the IPF, agreed that “we are experiencing today what we would call creeping annexation, and the danger is to go from creeping to legislated annexation that would make it official Israeli policy.” He said Israel “does not want to be in a situation in which the international community abandons the two-state framework, which would jeopardize its future as both a Jewish and democratic state.”

The dilemma, plainly stated, is that if Israel annexes the West Bank it will take in 2.5 million Palestinians who will either be granted Israeli citizenship and soon outnumber Jewish Israelis, or not be given the right to vote, making Israel an apartheid state in the eyes of much of the world.

Sara Stern, founder of Endowment for Middle East Truth, which supports U.S.-Israeli security efforts and opposes “the forces of radical Islam,” said she believes American Jews “have to respect the democratically elected government of the State of Israel.” She noted that Israelis have suffered violence and bloodshed since the Oslo peace pact was signed nearly 26 years ago and that Palestinian leaders rejected generous peace offers in 2000 and 2008. “Both offers were met with violence,” she said, adding that Israel’s unilateral withdrawal from the Gaza Strip in 2005 was met with a “frenzied atmosphere of hatred and chaos” in which the Palestinians destroyed the greenhouses Israelis left behind to help the “economic infrastructure of the nascent Palestinian state.”

Continued U.S. aid for Israel could be part of the progressive-moderate divide among Democrats in Congress. Rep. Alexandria Ocasio-Cortez (D-Queens-Bronx), told Yahoo! News that U.S. aid to Israel, which has enjoyed strong bipartisan support for many years, is “certainly on the table” now. She made the comment in discussing Netanyahu’s pledge to annex West Bank Jewish settlements and when asked if she favored cutting U.S. military or economic aid to Israel.

The Jewish Democratic Council of America tweeted in response: “We recommend she engage with Dem leaders Eliot Engel, Nita Lowey, & Ted Deutch before contemplating the future of US military aid to Israel. US-Israel ties must supersede politics.”

U.S. Secretary of State Mike Pompeo refused in Senate testimony this week to reaffirm American support for a two-state solution, saying, “Ultimately, the Israelis and Palestinians will decide how to resolve this.”

There are press reports suggesting that the long-delayed Trump administration peace plan will not offer the Palestinians a state.

Alan Dershowitz, who has been an adviser to the Trump administration on its peace proposal, has taken a middle-of-the-road approach on the annexation issue. He told The Jewish Week he still favored a two-state solution, which he said would work if annexation were “limited to the major settlement blocs. Annexing the outlying settlements, he said, “would create a problem.”

ZOA President Morton Klein questioned that, saying there are only 50,000 to 100,000 Jews living in outlying settlements and that those settlements, combined with the more than 300,000 Israelis living in major settlement blocs, constitute “less than 2 percent of Judea and Samaria [the West Bank]. Applying Israeli law to [that small area] does not preclude the possibility of a Palestinian state.”

He told The Jewish Week that he was “mystified” that the members of Congress “who for years have condemned Arafat and Abbas for violating every agreement with Israel and promoting hatred and violence in their media, schools and sermons … are promoting more concessions and statehood for this terrorist regime.”

Farley Weiss, president of the National Council of Young Israel, noted that the Palestinian Authority “has a policy to reward murderers of Jews by giving them [and their families] more money — these payments represent 7 percent of their budget.” And he said last week’s election demonstrated that Israeli voters now oppose a two-state solution because it has been “tried and has failed — that is why there is no peace now.”

As Israeli society moves further right, as evidenced from the election results, a majority of American Jews – 59 percent in an AJC poll last year – said they would be willing to dismantle some or all settlements. The same percentage said they strongly or somewhat favor a two-state solution through the establishment of a demilitarized Palestinian state in the West Bank.

Israel’s Consul General in New York, Dani Dayan, cautioned people not to get so worked up about Netanyahu’s promised annexation of Israeli settlements.

In remarks Sunday at the Rabbi Mordecai Waxman Memorial Program at Temple Israel in Great Neck, Dayan said, “Things that are said a few days before an election don’t necessarily happen. So I wouldn’t take seriously what was said,” referring to Netanyahu’s pledge of annexation. (See Editorial, Page 6.)

Michael Koplow, policy director of the IPF, said it is the “height of cynicism for the prime minister to promise something like that at the last minute … and then to say, ‘I take it back, just kidding.’ If I were his coalition partner, that would give me pause in terms of whether to support him.”