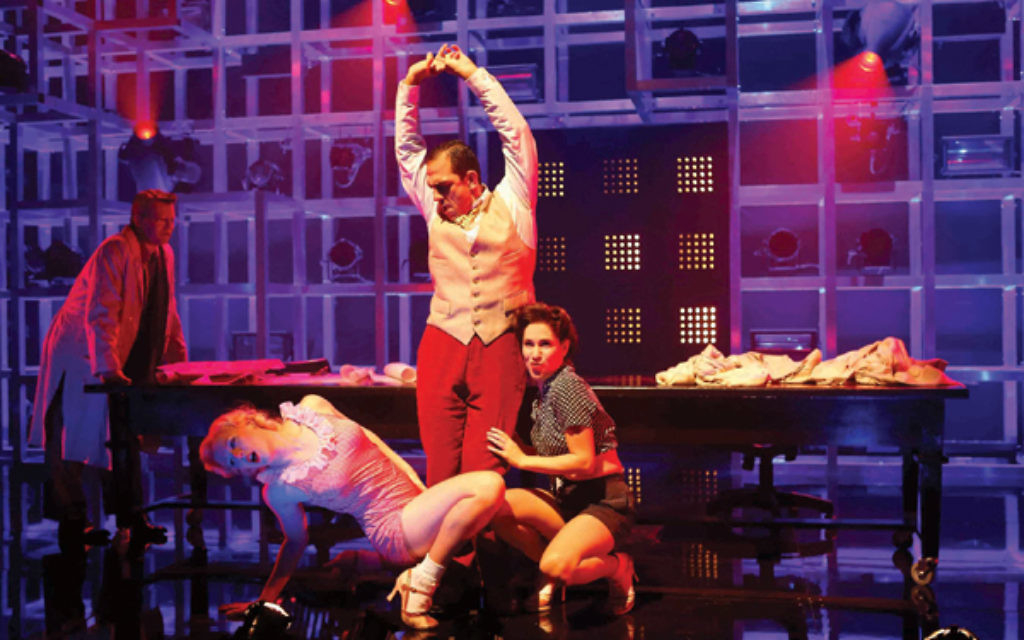 Once unleashed, some genies are almost impossible to put back in their bottles. The unsung Hungarian Jewish genius Leó Szilárd invented the nuclear chain reaction, patented the idea of a nuclear reactor and convinced Albert Einstein to endorse the Manhattan Project to build the atomic bomb — only to campaign unsuccessfully for it not to be dropped on Japan.

Now the scientist is the hero of a new rock musical, “Atomic,” which opens this month at the Acorn Theatre. Jeremy Kushnier (“Footloose”) stars as Szilárd, with Euan Morton (“Taboo”) in the role of his fellow physicist, J. Robert Oppenheimer, who narrates the story. The musical comes to the stage just as six world powers have resumed talks with Iran about reducing its uranium enrichment centrifuges, which enable the production of nuclear weapons.

Szilárd, born in 1898 to middle-class Jewish parents in Budapest, avoided racial quotas in the Hungarian universities by matriculating at the Institute of Technology in Berlin, where he met Einstein, Max Planck and other physicists. In order to escape the Nazis in 1933, he fled to London where he developed the concept of a nuclear chain reaction. He immigrated to America in 1938 and, alarmed at the news that the Germans were developing a nuclear reactor, enlisted Einstein to petition President Franklin D. Roosevelt to create the Manhattan Project for purposes of deterrence against Germany.

But after Szilárd learned that the United States planned to drop the newly built bomb on Japan, he campaigned desperately against its actual use. After the war, he turned to using atomic energy for peaceful uses; for example, he treated his own bladder cancer with cobalt radiation, saving his life and paving the way for the modern use of radiation in cancer treatment. He died in 1964 of a heart attack.

Danny Ginges and Gregory Bonsignore co-wrote the book and lyrics for “Atomic,” which is directed by Damien Gray. Ginges, who grew up in Sydney, Australia, told The Jewish Week that as a child he was terrified by the idea of nuclear exposure. When he first learned about the Manhattan Project, he was “shocked that something that affected me so much was also something that I knew so little about.”

Ginges called the team that developed the bomb the “greatest collaboration of minds ever,” and was drawn in particular to Szilárd as his subject, given that the eccentric, narcissistic and crusading inventor, who “always needed to believe that he was the smartest person in the room,” was “dedicated to saving the world through science; he knew that if Germany had an atomic bomb, then they would be undefeatable.” Ginges, who is a former advertising executive, set out to write about Szilard’s quest, initially conceiving of it as a film. But after attending a film “pitch festival” in Los Angeles in 1993 and failing to get the green light, he reconceived of the piece as a musical.

Enter Philip Foxman, a Jewish composer who also hails from Sydney. The child of Polish Holocaust survivors, Foxman saw an opportunity to meld rock music with klezmer and Yiddish folk songs. “The story inspired me,” Foxman said. “Szilárd’s head was so far up in the clouds that no one could deal with him. He was always three steps ahead of everyone else in his thinking. But his courage and commitment to push boundaries made him a hero.” Foxman’s score, which often combines the use of electric guitars, mandolins and banjos, includes soaring rock number, “The Atom Bomb is Here,” the haunting lullaby, “What I Tell Myself to Get To Sleep at Night,” and the plaintive ballad, “Headlights.”

Szilárd’s Jewishness comes into focus in the musical, Foxman said, because he is desperate to save his people from the Nazis. It also comes up in a scene in which Szilard’s wife, Trude (Sara Gettelfinger) attempts to get him to stay home for Shabbat dinner by reminding him that Jewish tradition permits the breaking of Shabbat only when life itself is at stake; he quells her objections, if not her anxieties, by informing her that he is developing the atomic bomb.

The director, Gray, told The Jewish Week that he is “attracted to stories that have a sense of the epic.” He called Szilard “a bit of a Dr. Frankenstein; he wanted to stop Germany, but once this monster was born, he did everything that he could to stop it.” Gray summed up the first half of the musical as “drop bomb” and the second half as “stop bomb.”

Gray creates large-scale spectaculars for Disney, Universal, and other entertainment companies; among his projects have been “Animagique” at Disney Studios Paris and “Biohazard” for Universal Studios Japan. He also conceived and directed a Jewish-themed musical, “Sladky Theresienstadt,” which ran for two years at a theater in Prague and then toured Europe.

For “Atomic,” Gray said that he “immediately eliminated the obvious — I didn’t want the audience to see the bomb itself; I wanted them to see the emotional effects of it.” He described the set, which was designed by Neil Patel, as “massive, industrial-looking, and stylized,” with a huge “cube matrix” metal tower that is meant to suggest the periodic table, set on a highly reflective black floor so that the entire structure seems to be floating in the air. “It’s a very raucous, loud and highly charged musical,” Gray explained, “so the production needs to be spectacular in every way. My shows explode the constraints of theater.”

Kushnier, who plays Szilárd, said the show is about “one man’s drive to make a difference — and his feeling of responsibility for the deaths of the Japanese.” He may not have suffered fools gladly, Kushnier said, or fallen in line with the military culture that took his invention out of his hands. But his brilliance and sense of moral responsibility made him, Kushnier insists, “not just ahead of his own time, but ahead of everybody’s time.”

Szilárd’s story is most comprehensively told in William Lanouette’s 600-page biography, “Genius in the Shadows” (Charles Scribner’s Sons, 1992), which attempts to restore Szilard to his place in the pantheon of physicists. But historian Richard Rhodes sums it up best in “The Making of the Atomic Bomb” (Simon and Schuster, 1986), when he describes Szilárd’s coming up with the idea for the chain reaction while walking in London and waiting for a stoplight to change. “The stoplight changed to green. Szilárd stepped off the curb. As he crossed the street, time cracked open before him and he saw a way to the future, death into the world and all our woes, the shape of things to come.”