Four days after Union Temple’s congregation discovered “Die Jew Rats” and other anti-Semitic phrases scrawled throughout the building and three days after a recent Brandeis graduate was charged with the crime, the Brownstone Brooklyn Reform synagogue reopened with beefed-up security.

The graffiti, which also included the phrases “Hitler,” “End It Now” and “Jew Better Be Ready,” according to The New York Times, had prompted the Prospect Heights synagogue to cancel a get-out-the-vote event headlined by “Broad City” star Ilana Glazer last Thursday evening, after people were already in line waiting to enter.

Police recognized James Polite, 26, from security camera footage, and arrested him on Friday. That same day, officials at the temple met with its private security company as well as representatives from the Brooklyn District Attorney’s Office, the NYPD and the mayor’s office, according to an email sent to parents of children attending the temple’s preschool. They decided that the school would reopen Monday morning with a new security protocol in place.

“You should expect to see two uniformed police officers and two security guards,” Susan Sporer, director of the synagogue’s preschool, wrote to parents. “Parents will be required to sign in to a log book as you enter the building to drop off your child in their classroom,” she continued, or, parents could make use of a new procedure that allowed parents to hand off their children to staff members at the door. The preschool also made a psychologist available to talk to parents at drop off.

Sporer told The Jewish Week that the incident was “too sad and too scary to talk about, at the moment.” In the email to parents, she warned that “Due to their age, [the children] are not be able to process or understand this. … If they have a question, give them short, non-threatening answer. Assure them that they are safe and cared for.” 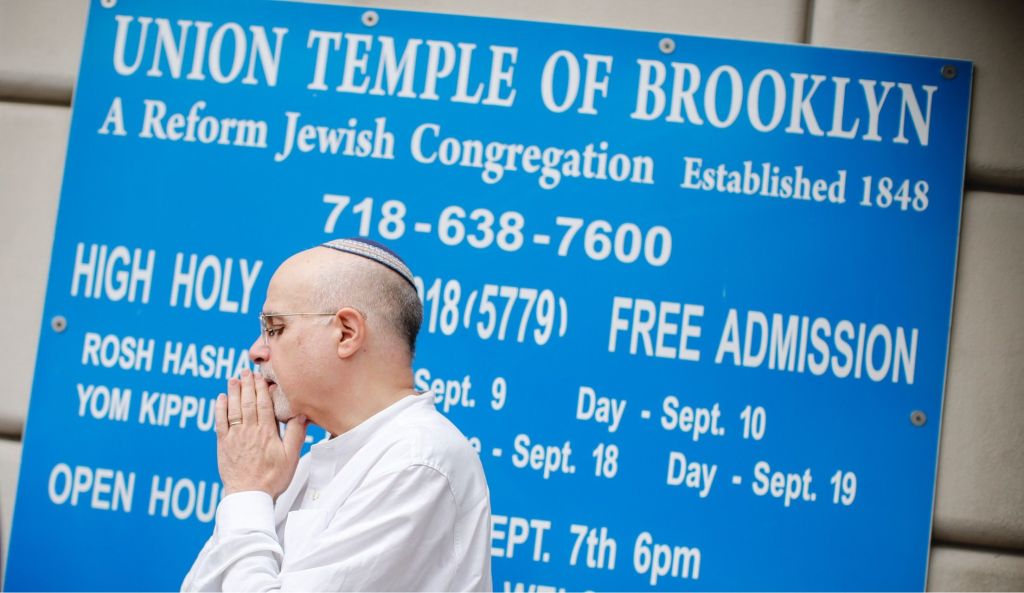 Rabbi Mark Sameth gestures as he thanks members of the Brooklyn Jewish community while NYPD officers stand guard at the door of the Union Temple of Brooklyn on November 2, 2018 in New York City. – New York police were investigating anti-Semitic graffiti found inside a Brooklyn synagogue that forced the cancellation of a political event less than a week after the worst anti-Semitic attack in modern US history. Getty Images

The incident left some parents shaken.

In a phone interview with The Jewish Week, a mother of two whose 3-year-old son attends Union Temple’s preschool, said the incident forced her to “own up to some difficult realities.” She didn’t want to give her name for privacy reasons.

“Of course I know anti-Semitism is real, but I guess that in the back of my mind I was telling myself ‘but not here,’” she said. “Now that it’s in Brooklyn, in my own super-progressive neighborhood, inside my baby’s preschool, I have to come to terms with it on a whole different level.”

She had recently volunteered to canvass her neighborhood ahead of the midterm elections, a decision that she said she’s now feeling conflicted about, “because of how much this incident makes me want to go out and buy a gun.”

The vandalism at Union Temple came less than a week after Robert Bowers went on a shooting rampage at the Tree of Life synagogue in Pittsburgh, killing 11 worshippers. He plead not guilty last week after being indicted on 44 federal charges.

A father of three who is not Jewish but whose child also attends the preschool, said that the graffiti “highlights how viciously random this kind of hatred is.” The father, who also held back his name due to privacy concerns, added, “right now we are all 100 percent Jewish.”

In fact Polite, a black gay man who grew up in Bed-Stuy, also had several Jewish connections: In addition to attending Brandeis, he lived for several years with Jewish foster parents. 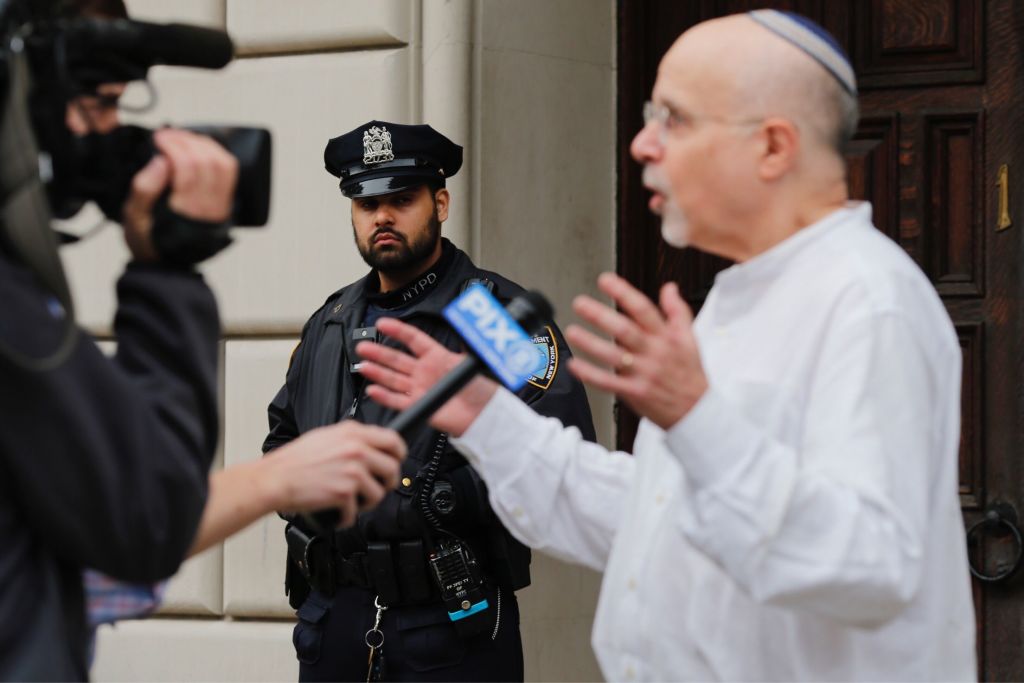 Rabbi Mark Sameth speaks with members of the Media as NYPD officers stand guard at the door of the Union Temple of Brooklyn on November 2, 2018 in New York City. – New York police were investigating anti-Semitic graffiti found inside a Brooklyn synagogue that forced the cancellation of a political event less than a week after the worst anti-Semitic attack in modern US history. Getty Images

Polite is also charged with arson. He was arrested Friday morning at Yeshiva Beth Hillel of Williamsburg, where a fire had been set inside the coat room, The New York Times reported. He was charged with hate crimes involving arson, reckless endangerment and criminal mischief for setting fires at four other locations affiliated with the Jewish community, including another school, according to the New York Times. On Saturday, Polite was sent to Woodhull Hospital for a psychiatric evaluation, according to The New York Daily News.

Polite spent his teen years in a succession of foster homes after his mother kicked him out at the age of 13 for being gay. His last placement before he aged out of the system at 21 was with Jenny Levison, a screenwriter and documentary filmmaker who is actively involved with Jews for Racial and Economic Justice and Jewish Voice for Peace, and Josh Waletzky, a documentary filmmaker and leading figure in the revival of klezmer and Yiddish music. A 2017 Times article, which shows Polite playing chess in with Waletzky in the couples’ sunlit, spacious apartment, says that Polite considered the couple to be “his second set of parents.”

In a Facebook message posted Monday, Levison wrote that she and Waletzky “are profoundly shaken and feel personally impacted by these acts, and our hearts break for all who are impacted” and that they “have a deep relationship with Union Temple of Brooklyn,” having attended services and other events there over the years.

“We are deeply saddened by James’s arrest,” she continued. “He joined our family six years ago, and we have supported him through his struggles with addiction and mental health issues. We hope that he moves toward recovery and mental wellness. We thank our friends, family, and broader communities for your support in this painful time, and we remain committed to building a fair and just New York and country—together with people of all faiths, races, ethnicities, and cultures.” 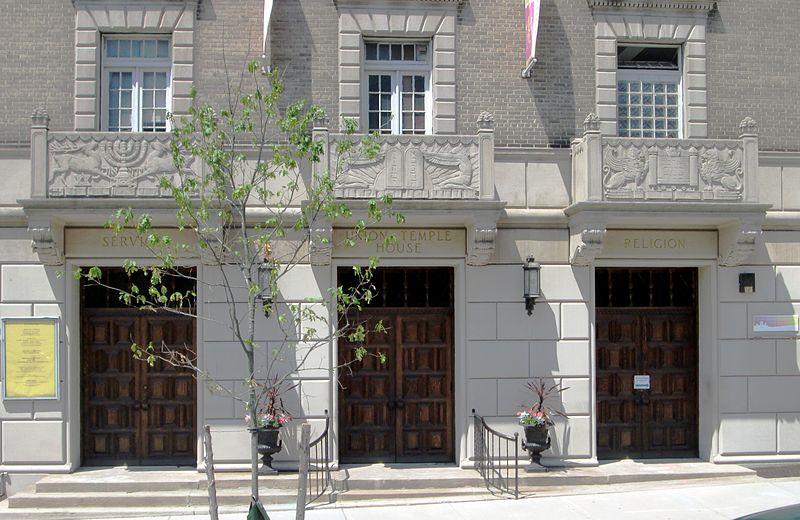 Polite also had formed a close relationship with former City Council speaker Christine Quinn, whom he began interning with meeting her at a gay pride rally as a teenager, according to a 2013 profile on him on DNAinfo. Quinn helped Polite get into Brandeis and helped him pay for some of his expenses including textbooks. He graduated last May, and according to a profile of him in The Times in 2017, he was majoring in  in African Studies and political science.

Polite struggled throughout college, according to The Times, which said he did a seven-month stint in a drug rehabilitation clinic for marijuana use and was hospitalized for psychiatric care this past summer. According to The Times, “he could not be placed” in a longer-term inpatient program as doctors had recommended, and soon stopped going to the outpatient program he was sent to instead. Quinn told The Times she used to speak with Polite “almost every day” but then his calls became infrequent and he was often “incoherent,” suggesting he was no longer taking his medicine, The Times said.

The charges against Polite come amid a sharp rise in anti-Semitic incidents in New York State.