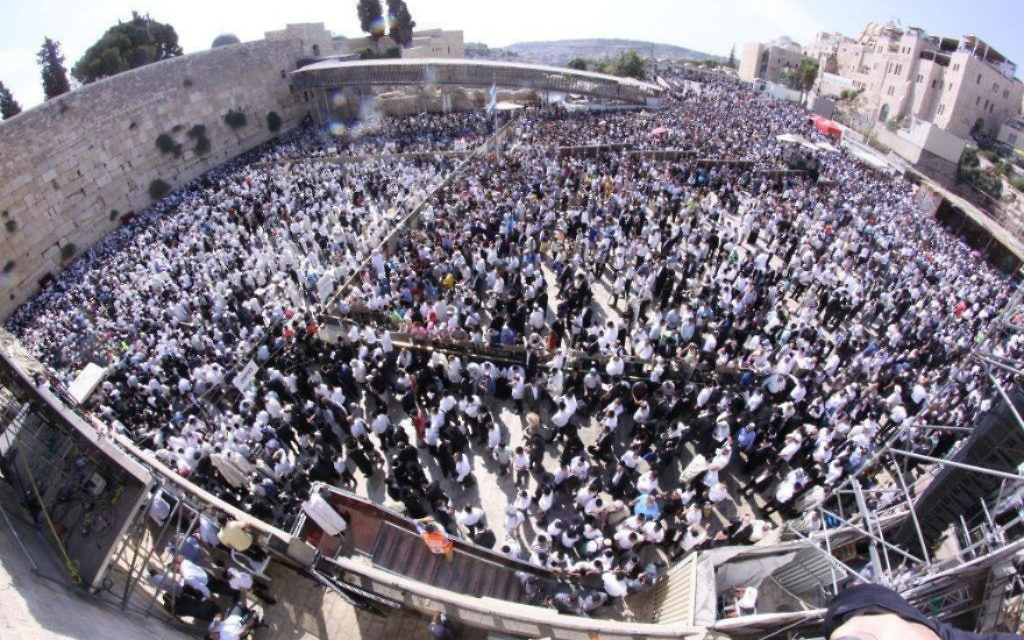 Thousands gather at the Western Wall to receive the priestly blessing on the Sukkot holiday, Sept. 30, 2015. JTA

A Palestinian effort to have a United Nations agency declare Judaism’s holiest site a Muslim holy site is “an attempt to distort history,” Israel said.

UNESCO, the U.N.’s cultural body, is scheduled to vote Tuesday on the proposal concerning the Western Wall in Jerusalem.

In a statement Monday, Israel’s Foreign Ministry called the proposal “an attempt to distort history and blur the connection between the Jewish people and its holiest place and to create a false reality,” the Times of Israel reported.

Six Muslim Arab countries submitted the UNESCO proposal on behalf of the Palestinians: Algeria, Egypt, Kuwait, Morocco, Tunisia and the United Arab Emirates. The proposal refers to Jerusalem as “the occupied capital of Palestine,” according to Ynet.

The proposal is believed to have a good chance of passing because the majority of UNESCO’s members have historically supported Palestinian bids.

A listing on UNESCO’s World Heritage List makes a site eligible for UNESCO’s assistance and encourages other organizations and individuals to preserve the site. Listing the Western Wall as a Palestinian, as opposed to Israeli site, could detract from efforts to preserve it as a Jewish site.

The Wall, known in Hebrew as the Kotel, is believed to be one of the few remnants of the retaining wall of the ancient Temple, which the Romans destroyed nearly 2,000 years ago. A venue for Jewish prayer services and individual Jewish prayer, the Wall is a stop on most tours of Israel.

It is adjacent to the Temple Mount, a site holy to both Jews and Muslims.

According to the World Jewish Congress, the proposal blames Israel for the recent escalation of violence and seeks to confirm an earlier UNESCO decision that the Cave of the Patriarchs and Rachel’s Tomb, two West Bank sites holy to both Jews and Muslims, are part of a Palestinian state.

The proposal “goes in the face of the UNESCO Constitution, which very clearly states the organization’s aim to contribute to peace and security by promoting collaboration and coexistence,” Lauder said. “It would make a mockery of that founding principle if the UNESCO Executive Council were to back such a resolution. UNESCO must not be turned into a battleground for conflicts between religions.”​

“We call upon the international community to recognize this resolution for the absurdity that it is,” Nathan Diament, the Orthodox Union’s executive director for public policy, said in a statement.

UNESCO was the first U.N. body to accept “Palestine” as a member.