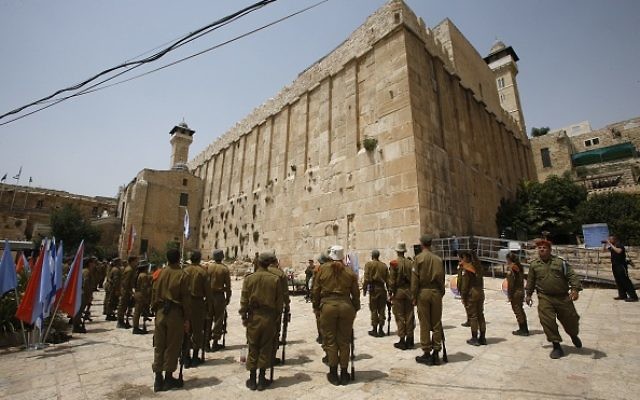 Israeli soldiers stand outside the Tomb of the Patriarchs in Hebron ahead of a demonstration against a UNESCO decision to add the heart of the city to the endangered world heritage list. UNESCO's heritage committee voted 12 to three -- with six abstentions -- to give heritage status to the Old City in the centre of Hebron. Getty Images

UNESCO, the United Nations cultural agency, has a long and disturbing history of bias against Israel, if not full-scale anti-Semitism. Last fall, UNESCO passed a resolution that denied Jewish connection to holy sites in Jerusalem and Israeli sovereignty over the city. Now comes a decision to declare Hebron, which includes the burial site of the Jewish patriarchs and matriarchs, as a Palestinian world heritage site. Even more, it is listed on the endangered list, implying that Israel, as the “occupying power,” is responsible for this danger to the city.

As Nathan Jeffay, our Israel-based contributing editor, notes, this could lead Palestinian activists to respond with violence. It was the belief that the Al-Aqsa Mosque in the Old City of Jerusalem was in similar danger that sparked a wave of stabbings and other violence against Jews that began in October 2015.

Hebron, viewed as an historic and holy city to both Jews and Arabs, has a long history of violence. In 1929, Arab riots resulted in the murder of 67 Jews, and in 1980, six yeshiva students were killed on Shabbat. In 1994, Baruch Goldstein, a Jewish resident, killed 29 Arabs worshipping at the Tomb of the Patriarchs. About 1,000 Jews now live in the city, surrounded by more than 150,000 Arabs. Tensions are always high and confrontations are frequent. Incitement could set off another round of bloodshed.

Israeli Prime Minister Netanyahu, who called the latest UNESCO decision “delusional,” said Israel would cut $1 million from its funding of the U.N. agency and give it instead to a Jewish history museum being built in Hebron. U.S. Ambassador to the U.N. Nikki Haley called the vote “an affront to history,” adding that it “undermines the trust” for future Israeli-Palestinian peace talks and “discredits an already highly questionable U.N. agency.”

Still, the resolution was carried by a vote of 12 to 3, with 6 abstentions. All that was really proved was that UNESCO, with its automatic pro-Palestinian majority, continues to turn a deaf ear when it comes to Israeli legitimacy.