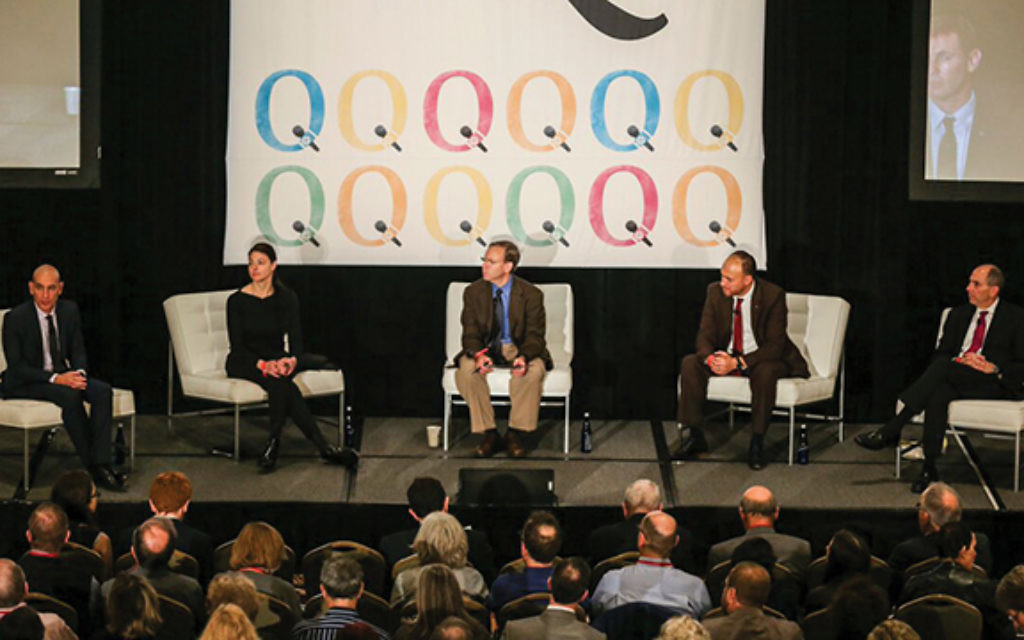 The event featured milling crowds, lemon bars, glasses of wine and a menorah-lighting ceremony. Was it a Chanukah party or a conference?

Officially billed as a “new Israeli-American discussion” hosted by the Israeli newspaper Haaretz and the nonprofit New Israel Fund, the Dec. 13 gathering gave many attendees a feeling of connection and energy.

“It’s nice to be with people you agree with,” said Linda Lebovitz, a criminal defense attorney from Long Island, to The Jewish Week as she scanned the crowd crammed into the ballroom of the Roosevelt Hotel in Midtown Manhattan.

“The Jewish left is not dead,” said Sanford Weiner, a supporter of Americans for Peace Now and J Street and a board member of Partners for a Progressive Israel, at the end of the day. “Although the two-state solution might be.”

Indeed, the event’s warm glow laid bare some of the challenges the Jewish state poses for the left, both Israeli and American.

AIPAC, which lobbies the U.S. government on behalf of the Jewish state, has long dominated Israel activism, with its $70 million budget and ever-expanding annual conference. Last year’s headcount: about 14,000.

J Street, founded in 2008, has given Jews who don’t like AIPAC’s support of Prime Minister Benjamin Netanyahu’s right-wing government another way to support Israel. At HaaretzQ, as Sunday’s event was called — “Q” for questions — J Street’s constituency reconnected and recharged between its conferences, which draw crowds of about 3,000 each. About 1,200 people, higher than the 800 originally expected, attended HaaretzQ, said Paiss.

“My whole world is here,” said Jeremy Ben-Ami, J Street’s president, in an interview. “People feel empowered, people feel networked, people understand that they’re not alone, and that to me is about as important an outcome as any.”

But some fretted that the conference might have generated more heat than light.

Palestinian activist Carol Daniel Kasbari, a speaker on a panel about Israeli and Palestinian resistance, criticized the sessions for being long on talk and short on plans for action. There were so many talks, she told The Jewish Week, that nobody could delve deeply enough on any one topic, and participants didn’t have enough time to meaningfully network. And she almost walked out when she realized that a panel on Jerusalem, which she had asked to speak on didn’t include a Palestinian.

“Are we really coming here to blah blah blah some more?” she asked.

Squeezing 60-some speakers into one day was a challenge, Haaretz editor-in-chief Aluf Benn wrote in an e-mail from Israel after the conference was over.

“We’ll learn the lessons,” he wrote, and said the meeting achieved Haaretz’ goals of making itself more known in the United States, and facilitating a memorable conversation.

Even Weiner, who enthusiastically praised the quality of the speakers both Israeli and American and called the conference as a whole “diverse,” felt compelled to backtrack and amend that comment slightly: “Diverse, but within a narrow range,” he said.

While many attendees and speakers compared the gathering favorably to AIPAC for presenting a less relentlessly rosy, more realistic vision of Israel, Haaretz’ lineup was in many ways a mirror image of AIPAC’s. Conversations about human rights dominated; security concerns were not ignored, but took a back seat.

Reuven “Ruvi” Rivlin represented the right in his morning keynote speech, but leaned heavily on his prerogative as President of Israel, a largely ceremonial role, to strike a feel-good note by talking a lot about the importance of Haaretz as an Israeli institution, “a newspaper with a specific agenda [that] gives a voice to many different opinions,” and one that he read as a child, for the comics.

The Israelis said the gathering was useful. It was a chance to connect with potential allies after years of focusing on recruiting support in Europe, said Michael Sfard, an Israeli human rights lawyer.

“In America it was more difficult, even five or six years ago, to say certain things, like the ‘a-word,’ even to more liberal crowds,” he told The Jewish Week, referring to the claim that Israel’s government is creating an apartheid-like system of racial segregation with separate roads and towns.

American Jews have become more receptive to criticism from the Israeli left about its own country as their disenchantment with Netanyahu has grown, he said.

“The left have to understand how much money the right pours into Israel,” MK Merav Michaeli, of the center-left Zionist Union party, said in an interview.

In a session about whether Israel is a divisive force among U.S. Jews, Haaretz moderator Chemi Shalev reminded panelists that the American-Jewish right has always had more motivation and more money than the American-Jewish left when it comes to Israel.

“You’ve fought for everyone,” he told Rabbi Sharon Kleinbaum of the predominantly LGBT synagogue Congregation Beth Simchat Torah, “but right-wing donors have one issue or two: Israel, and maybe Jewish identity.”

“No doubt the right has certain advantages over us, but we have the advantage of actually being correct,” she responded, both acknowledging the right’s tactical advantages and avoiding more discussion of them by letting fly a big laugh line.

The conference also revealed fault lines in the Israeli left.

Michaeli and Husam Zomlot, director of Fatah’s Foreign Relations Commission, got into an argument during their panel discussion on unfreezing the peace process that highlighted the distance between the Jewish left and the Palestinians.

Zomlot spoke in favor of sanctions and boycotts against Israel, and said the last moment of hope was under the leadership of Yitzhak Rabin and Yasser Arafat. Michaeli tried to find an area of agreement with him by paying tribute to those leaders, but concluded with a direct criticism of Zomlot.

“Please, you and I are sitting here because you and I believe that we can and we must bridge this thing and find a solution,” she said. “You have to recognize the right of the Jewish people for the state of Israel in the land of Israel, and until you do that, we are both staying very righteous.”

PLO Secretary General Saeb Erekat asked the conference organizers to remove the Israeli flag from the stage, saying he didn’t want to speak under it, and they “respected his request,” Benn wrote in his e-mail.

And MK Tzipi Livni, leader of the Zionist Union party, exposed another fracture on the left when she took time in her morning keynote talk to scold Breaking the Silence, the Israeli NGO that fights the occupation of Palestinian territory by publishing the testimony of soldiers who served in the West Bank and Gaza. Breaking the Silence member Avner Gvaryahu was one of the conference’s speakers.

“Breaking the Silence, give your information to formal committees,” Livni said. “As a mother of two combat soldiers, I give you this message.”

And throughout the conference, the conversation returned to the question of the two-state solution. Many said there is no other option; equally as many asked if it is dead, or said it already is.

“I challenge the people attending this conference and all of those in our camp to end the debate about whether or not the two-state solution is dead,” Ben-Ami pleaded during one panel discussion. “It’s like wheeling a patient into the ER, and the doctor stands back to ask, ‘Well how close is he to dying? Is he dying? Is he not?’”

“There is no other solution,” Ben-Ami said.