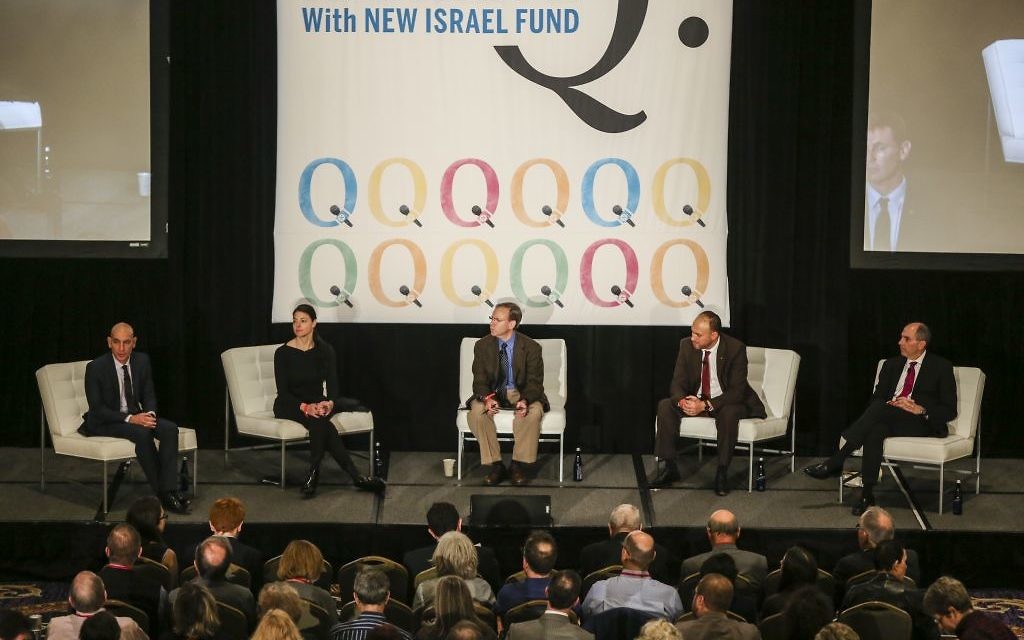 The event featured hundreds of people milling around, lemon bars and a menorah-lighting ceremony. Was it a Chanukah party or a conference?

Officially billed as a “new Israeli-American discussion” hosted by the Israeli newspaper Haaretz and the non-profit New Israel Fund, the Dec. 13 gathering had some of the successful social event’s warmth and energy.

“It’s nice to be with people you agree with,” said Linda Lebovitz, a criminal defense attorney who lives on Long Island and calls herself “left-leaning” on Israel.

Yet even as the event cast a warm glow of solidarity and hope, it also laid bare some of the challenges the Jewish state poses for the left, both Israeli and American.

AIPAC, which lobbies the U.S. government on behalf of the Jewish state, has long dominated Israel activism, with its $70 million budget and ever-expanding annual conference. Last year’s headcount: about 14,000.

J Street, a newer lobbying group, has given Jews who don’t like AIPAC’s support of Prime Minister Benjamin Netanyahu’s right-wing government another way to support Israel. At HaaretzQ, as Sunday’s event at the Roosevelt Hotel in midtown Manhattan was called — “Q” for questions — there was much overlap with J Street. With AIPAC, not so much.

“My whole world is here,” said Jeremy Ben-Ami, J Street’s president. “People feel empowered, people feel networked, people understand that they’re not alone and that to me is about as important an outcome as any.”

But some fretted that the conference might have generated more heat than light.

Palestinian activist Carol Daniel Kasbari criticized the conference for being long on talk and short on plans for action. There were so many speakers that there wasn’t even enough time for attendees to do any meaningful networking, she added.

The gathering gave Israelis on the left a chance to connect with potential allies after years of trying to recruit those supporters in Europe, said Michael Sfard, an Israeli human rights lawyer.

“In America it was more difficult, even five or six years ago, to say certain things, like the ‘a-word,’ even to more liberal crowds,” he said, referring to the claim that Israel’s government is creating an apartheid-like system of racial segregation with separate roads and towns.

American Jews have become more receptive to the criticisms of the Israeli left as their disenchantment with Netanyahu has grown, he said.

The Israeli politicians in attendance seized the day to remind American progressives that their camp needs financial support.

“The left have to understand how much money the right pours into Israel,” said Merav Michaeli, a Labor Party Knesset member.