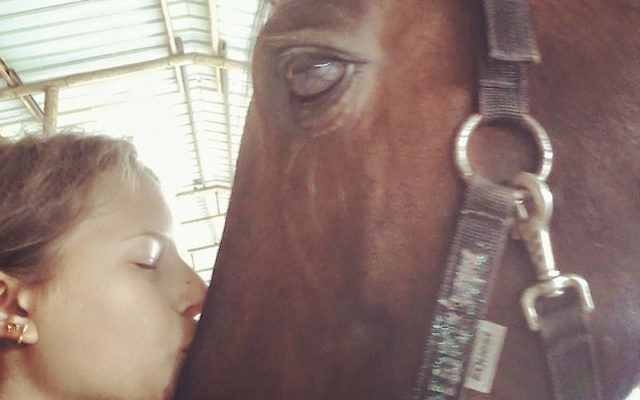 She’s the 13-year-old who has brought the true face of the anti-Israel boycott movement to light.

When Shachar Rabinovitz opened her email inbox last week in her northern Israel home, she couldn’t believe what she saw. She was working on a school project and reading her way around the Internet’s resources on her favorite subject, horses. One article had the email address of its author, a former Cambridge University academic, and so she tried her luck and sent Marsha Levine a message.

“I know you are a very important person and I’ve read your article about horses [“Domestication, Breed Diversification and Early History of the Horse”],” she wrote. “I love horses very much and it will be an honor if you will answer my questions.”

When the response came, it was a refusal to help her — “until there is peace in Palestine.” Shachar had not written anything about Israel, but simply mentioned that she is Israeli, and this piece of information became the sole concern of Levine, who is Jewish. “You might be a child, but if you are old enough to write to me, you are old enough to learn about Israeli history and how it has impacted on the lives of Palestinian people,” she wrote, adding: “Maybe your family has the same views as I do, but I doubt it.”

Last week Shachar watched bemused as her name started popping up in dozens of news articles, and as she received requests to appear on Israeli television. In the midst of all of this, I went to interview her.

It’s probably the first time that I ever found my interviewee in slippers, but then again, it was 9 p.m., so nearly bedtime. She comes across as a sweet girl who is always smiling, and she can’t stop giggling when her dog keeps jumping on me. She is simply crazy about horses, and shows me pictures of her riding and even kissing a horse. She rides once a week, show jumps, and says that “every notebook of mine is full of drawings of horses.” She already has plans to buy a ranch “when I retire.”

Shachar is thinking so long-term, her mother Galia chimes in, because at the moment they don’t have money to buy “a horse or even half a horse.”

When Shachar saw Levine’s email last Sunday she had just arrived home from school and a dentist appointment. She wandered over to the computer in the corner of the modest living room where I spoke to her, and logged on. She was “speechless” and “upset” when she saw the reply, and soon afterwards showed her teacher. “My teacher had helped me to write the email and I showed him — we were both shocked.”

Shachar went to school last Monday, a normal 13-year-old girl, and while she was in her lessons, her story spread like wildfire. Her father had posted Levine’s reply on Facebook, and by the evening her story was everywhere in Israel and in the British media.

Levine is not backing down on the way she dealt with Shachar’s email. “The Jews have become the Nazis,” she told a reporter from the London-based Jewish Chronicle, referring to what she called Benjamin Netanyahu’s “ethnic cleansing.” And she said that given that the Israeli government’s policies towards Gaza have support among the population, Jews have “turned themselves into monsters.” She even suggested to another British publication that Shachar emailed her with a political motivation, saying her parents “set her up.”

Talking to her, it jarred badly with me that someone so young and blameless — someone who doesn’t “really understand politics,” as the 13-year-old said — has been pulled in to this nasty political battle. She’s so innocent that she can’t help feeling for Levine when she hears her interviewed. “I felt bad for her because I don’t want to hurt any person, regardless of their political opinions,” she said.

Her home is on Kibbutz Regavim, near Binyamina in the north of Israel. It is a 10-minute drive from a mixed Jewish-Arab school where children learn in a bilingual environment, all of them studying Hebrew and Arabic, and marking Jewish and Muslim festivals. Shachar doesn’t attend this school (it’s an elementary school), but loves her Arabic lessons at school. This region and this family are a far cry from the reactionary Israel that the boycotters are portraying. Oh, and a very far cry indeed from many of the truly repressive countries in the world against which Levine has no boycott policy, and whose 13-year-old horse-crazed girls her conscience wouldn’t prevent her from answering by email.

As Shachar sat on the sofa in her living room, cuddling with her mom, she told me that she never knew that another Jewish person would hold her in so much disdain for where she lives. She held my gaze, as if I would have an answer to be able to explain this, but I could only move on to my next question.