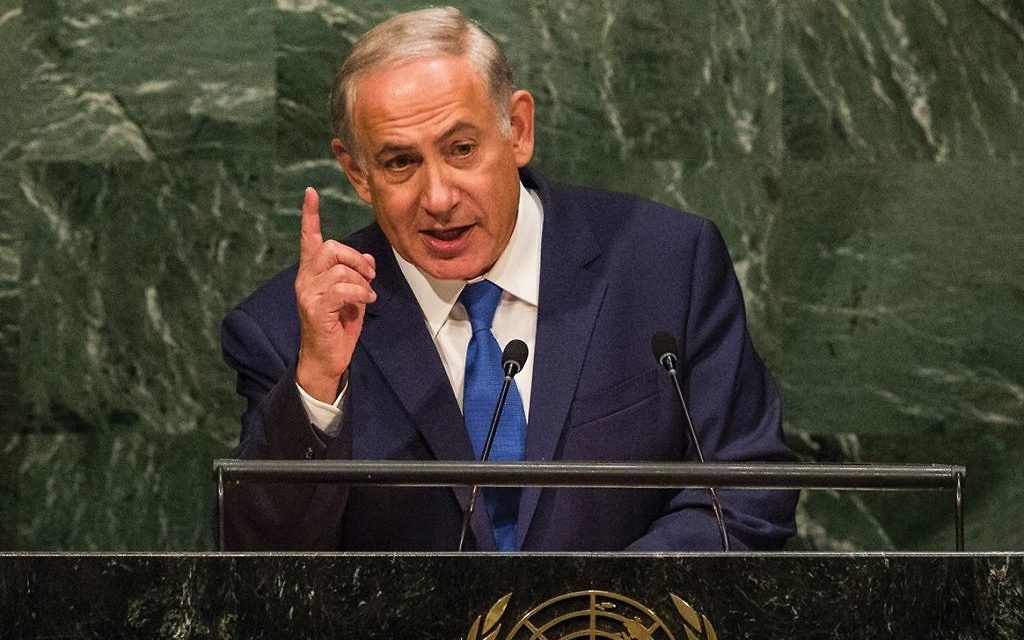 Israeli Prime Minister Benjamin Netanyahu’s blistering United Nations speech last week, in which he chastised the General Assembly for its “deafening silence” following Iran’s recent pledge to destroy Israel within 25 years, was also used as a signal that he wants to mend ties with President Barack Obama.

“Even though he did not spend a lot of time on it, he said there is no more important partner than the U.S. and that he wants to change the channel and the soap opera that has characterized the Obama-Netanyahu relationship for seven years,” said Aaron David Miller, a former adviser to six secretaries of state.

Miller, now a vice president at the Woodrow Wilson International Center for Scholars, predicted that Obama would be receptive to such an overture, saying: “The president’s priority is seeing the [nuclear] agreement implemented and not to fight with Bibi [Netanyahu’s nickname] right now.”

Netanyahu and Obama are scheduled to meet in Washington Nov. 9 to discuss the nuclear agreement and Iran’s terrorist activities in the region.

Netanyahu devoted the bulk of his 45-minute speech to the Iran nuclear deal that he has so fiercely opposed, but he made clear that he understands it is a done deal.

“That represents a psychological transition [for him],” Miller said. “He is opposed to the agreement but he is acquiescing to reality [and] … holding the international community accountable,” to ensure Iran does not cheat.

Although acknowledging that the nuclear deal places constraints on Iran’s attempts to acquire nuclear weapons, Netanyahu pointed out that those restrictions expire in 10 and 15 years.

“That would place a militant Islamic terror regime weeks away from having the fissile material for an entire arsenal of nuclear bombs,” he said. “That just doesn’t make any sense.”

In the meantime, he said Iran would use much of the $150 billion it will receive from unfrozen oil revenues to continue to foment attacks on Israel and others using such proxies as Hezbollah, Hamas, Islamic Jihad and the Houti rebels in Yemen.

“By fueling Iran’s aggressions with billions of dollars in sanctions relief, it makes war more likely,” he insisted.

“I know that some well-intentioned people sincerely believe that this deal is the best way to block Iran’s path to the bomb,” Netanyahu said. “But one of history’s most important yet least learned lessons is this: The best intentions don’t prevent the worst outcomes. … And what makes matters even worse is that we see a world celebrating this bad deal, rushing to embrace and do business with a regime openly committed to our destruction.”

There were no surprises in Netanyahu’s speech, which was most noticeable by what he didn’t say — a 40-second stare-down of the General Assembly delegates over their failure to respond to Iran’s threats against Israel.

“Seventy years after the murder of six million Jews, Iran’s rulers promise to destroy my country, to murder my people, and the response from this body, the response from nearly every one of the governments represented here, has been absolutely nothing. Utter silence. Deafening silence,” he said while glowering at those seated in the cavernous hall.

Mordechai Kedar, an Israeli scholar of Arabic literature and a lecturer at Bar-Ilan University, said that through his speech Netanyahu displayed leadership qualities instead of “adjusting his message to reflect the changing situation.”

“A leader is a person who has a vision and an idea and strives to achieve it regardless of what people tell him and regardless of the atmosphere around him,” he said. “This is somebody who is convinced he is right and that all others are wrong, and Netanyahu gave a speech of a real leader. He did not give up and surrender to others who are much more powerful. He preferred to stay on the dock and say, ‘Your ship is going to sink and I’m not going with you.’”

But Alon Ben-Meir, a professor of international relations at the Center for Global Affairs at NYU who teaches about international negotiation and Middle Eastern studies, said he believed Netanyahu’s continued criticism of the nuclear deal “does not help anything and does not make Israel or Netanyahu look any better in the eyes of the White House.”

Ben-Meir noted that in his speech Netanyahu renewed his commitment to restart peace talks with the Palestinians at any time and unconditionally.

“What does unconditionally mean?” he asked. “How can you negotiate without first establishing rules of engagement? Where do you start? What is your agenda and how do you want to achieve it? Unconditionally is empty rhetoric; it doesn’t mean a damn thing.”

Instead, Ben-Meir said, Netanyahu should “say the talks would deal with borders, and that would allow talk about settlements and national security. That is the lie that Netanyahu continues to perpetuate day in and day out — and [Palestinian President Mahmoud] Abbas is no different. He is also engaged in empty rhetoric instead of stopping incitement. If they were really committed, they would talk until there was an agreement.”

Ben-Meir added that the composition of the current Israeli government does not permit such talks, and he said Netanyahu himself is not committed to a two-state solution to resolve the Israeli-Palestinian conflict.

“We need new leadership that will make the concessions necessary [for peace],” he added.

Ephraim Sneh, a former Israeli deputy minister of defense and now chairman of the S. Daniel Abraham Center for Strategic Dialogue in Netanya Academic College, said in a conference call with the Israel Policy Forum that Netanyahu is to blame for the failure to resolve the Israeli-Palestinian conflict.

He said that for the past 10 years, Abbas has “adhered to the strategy of negotiation with Israel against terrorism and against violence — and all of the Israeli governments … have humiliated him and made him weaker and weaker.”

In Abbas’ own U.N. speech last Wednesday, Abbas said the Palestinians would no longer abide by the Oslo Accords that set the stage for a Palestinian state because Israel was ignoring them.

“He has 100 percent justification for his complaints,” said Sneh. “No one can find another Palestinian leader who is more pro-peace than Abbas.”

Sneh said Abbas’ speech “reflected his frustration and isolation.” And he said Israel’s failure to resolve the Palestinian conflict “isolates Israel and denies it international support against Iran and its proxies.”

He agreed with Ben-Meir that a majority of the current Israeli government is “against any tangible concessions to the Palestinians, yet alone for the freezing of settlement” construction.

“If Netanyahu is sincere about negotiating with the Palestinians, he has to change the government, bringing in parties in favor of a two-state solution and kicking out those against it.”

But Morton Klein, president of the Zionist Organization of America, said it is Abbas who has prevented a resolution of the conflict.

“Abbas has come to the negotiating table only one week in the last six years,” Klein said. “Abbas has turned down offers of statehood from [former Prime Minister Ehud] Olmert while promoting the murder of Jews by naming streets and schools after Jew killers and giving pensions to Jew killers’ families.”