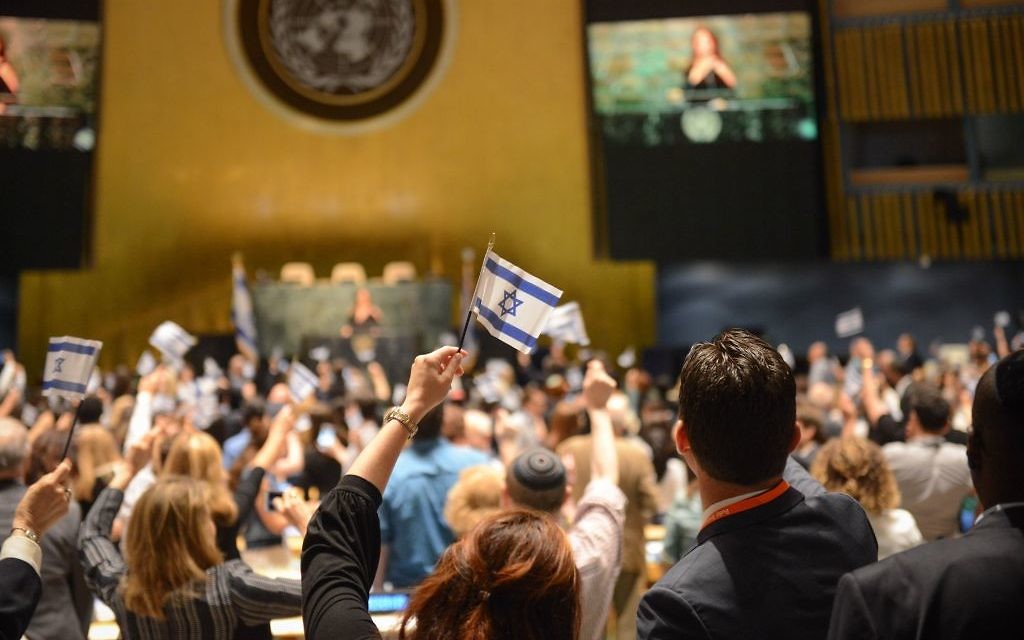 The United Nations, whose bodies have consistently leveled false charges against Israel for everything from the poor treatment of Palestinian women to the poor health of Palestinians, was the site Tuesday of a daylong forum to combat such attacks and the BDS (Boycott, Divestment and Sanctions) movement.

“Make no mistake. the BDS movement doesn’t support the Palestinian people,” said Ronald Lauder, president of the World Jewish Congress, one of the forum’s sponsors. “It is strictly a campaign to delegitimize Israel, which is simply the latest attempt to deny the Jewish people their right to self-determination. Every other people on earth have that right, but BDS wants to deny that basic right to Jews.”

Speaking to 1,500 participants — primarily high school and college students from the tri-state area — Lauder questioned “whether those who join protest marches on campuses and chant, ‘From the River to the Sea, Palestine will be free!’ realize that the river is the Jordan, the sea is the Mediterranean [and that] these activists are calling for the destruction of the State of Israel.”

Israel’s U.N. ambassador, Danny Danon, called BDS “a modern-day anti-Semitism,” and added, “We must unite to reveal its true face and put an end to its ideology of hatred and lies. …The truth is the best weapon in the battle against the lies and distortions of BDS.”

The plenary was held in the General Assembly Hall, following which there were two simultaneous panel discussion about the effects of the boycott in academia and in the legal realm.

“We wanted to do something at the U.N. to make a statement there,” explained Betty Ehrenberg, executive director of the WJC North America. “We invited high school seniors, Hillels, university students — as many Jewish students as we could from the tri-state area. It was not geared to diplomats, but I saw the French ambassador and ambassadors from some African countries. The idea was to let the students know that there is a Jewish community infrastructure to call on” if they need help dealing with BDS.

Among the other speakers at the forum were Daniel Birnbaum, CEO of SodaStream, an Israeli company once targeted by BDS because part of its operation had been located in the West Bank, where it employed many Palestinians.

“There are two things you can do,” he said. “You can either go to your campuses and fight back — and I am urging you to do that — there are a tremendous amount of facts to support us. We are not an apartheid state. … While we fight with all the ammunition we have — with the facts — let’s also build bridges. Let’s get to know the Palestinians. There are good Palestinians — they are not all terrorists — believe me. We all love Israel, but I think we can all do more to embrace coexistence and peace.”

The American reggae singer Matisyahu, who last year briefly faced a boycott by a Spanish music festival after he refused to sign a statement endorsing a Palestinian state, gave a rousing performance in the General Assembly Hall that had the audience on its feet.