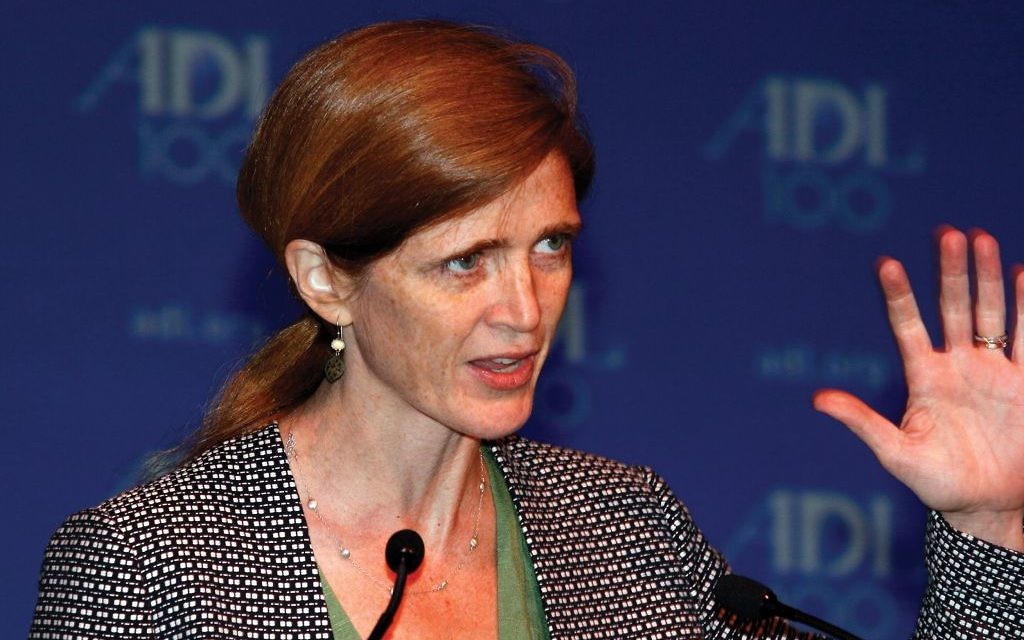 America’s top envoy to the world community, Samantha Power, told leaders of the Anti-Defamation League last week that the Obama administration stands firm against Iran’s nuclear program and isn’t weakening its position, despite emerging dialogue between the two countries.

“No deal is better than a bad deal” on nuclear disarmament, said Power, who succeeded Susan Rice as United Nations Ambassador in August. “We will not accept a bad deal.”

She acknowledged skepticism among Israel supporters about the overtures of Iranian president Hassan Rouhani, who seems determined to increase engagement with the West as economic sanctions severely impact his economy.

“Let me be absolutely clear: President Obama is determined to ensure that the Islamic Republic does not acquire a nuclear weapon,” Power said last Thursday at the Hyatt Hotel, where ADL representatives from around the country gathered for two days of sessions. After that statement garnered applause, Power repeated it for emphasis.

“Although our government welcomes the more constructive tone in Iran’s official statements, the level of mistrust inherited from the past, as you well now, is deep,” she said.

Power implored the audience to “please remember that we are not engaging Iran for the sake of engaging Iran … We are striving to secure an unambiguous and verifiable guarantee that Iran’s nuclear program is a peaceful one and that its government will not build or acquire a nuclear weapon.”

Power, who praised ADL’s long history of challenging discrimination and intolerance around the world, also vowed to have Israel’s back in the world body.

“On my watch we will push ceaselessly for further inclusion of Israel in regional groups and demand objectivity in resolutions affecting Middle East peace. … There is no basis to exclude Israel from full participation in the United Nations system.”

Touching on the civil war in Syria, Power said, “The urgency of finding a diplomatic solution to the Syrian crisis cannot be exaggerated.” She noted the severe medical conditions in the war-torn country, in which doctors have been prevented from treating anyone who was injured by pro-Assad forces.

Power also announced that the United Nations has agreed to transfer a full copy of its wartime commission archives to the U.S. Holocaust Memorial Museum in Washington.

The book should be a reminder of the magnitude of the Holocaust and its Jewish victims, Foxman said.