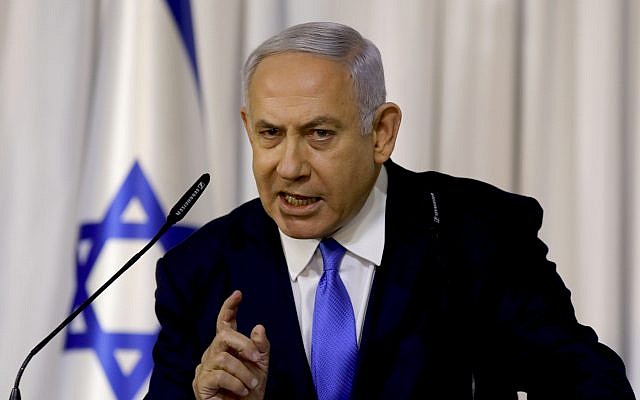 JTA  The umbrella body for Jewish public policy groups has directly urged Israeli Prime Minister Benjamin Netanyahu to denounce a far-right political party that he invited into a marriage of convenience ahead of April elections.

A letter sent Tuesday by the Jewish Council for Public Affairs is unusual in that it directly addresses Netanyahu on the topic of Otzma Yehudit, or Jewish Power, which has roots in the racist anti–Arab views of the late Rabbi Meir Kahane. The letter, however, carefully avoids chiding him for courting the party.

The Jewish Telegraphic Agency has obtained a copy of the private letter.

“We are unwavering in our support for the nation-state of the Jewish people and the country’s quest for peace and security,” the letter says. “We are dismayed, however, by reports that a racist party was brought into the election process.”

The passive voice is notable: It is Netanyahu who brought Jewish Power to the process. Earlier this month he arrange for a party to the right of his own Likud to jointly run with Otzma in the elections and thereby strengthen their chances of success.

“We urge you to speak out against Otzma Yehudit’s racism in no uncertain terms,” the JCPA letter concludes.

Directly addressing Netanyahu is nonetheless significant for a centrist Jewish group that operates through a consensus-building system soliciting Jewish voices from right to left.

Among those groups condemning Otzma are the Anti-Defamation League, the American Jewish Committee and the American Israel Public Affairs Committee. It is rare for AIPAC to weigh in on Israeli politics. Netanyahu is scheduled to travel to Washington and address the lobby at its annual conference next month.

Netanyahu has defended working with Otzma by accusing critics of hypocrisy for not criticizing the Labor Party for using non-Zionist parties to maintain power in the mid-1990s.