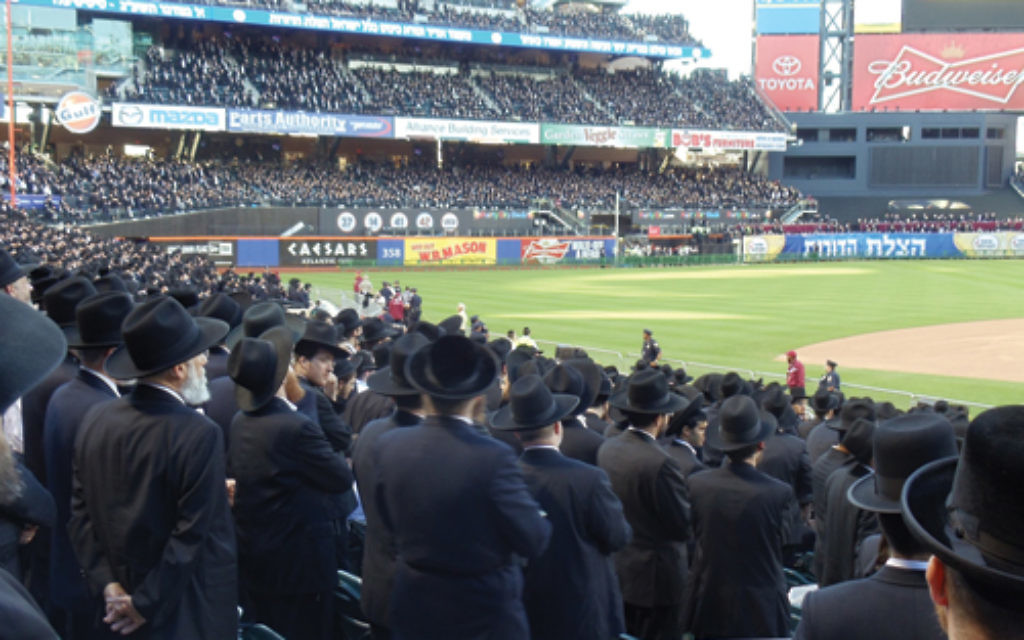 When I first heard that a rally was planned for Haredi (ultra-Orthodox) Jews to protest the Internet, I didn’t think it would attract much attention. After all, the Internet has long been under attack in Haredi communities and their rabbinic leaders have forbidden it in the past.

The event on May 20 at Citi Field in New York (home of the Mets) drew a massive audience of more than 40,000 men, with an overflow crowd tuning in to a live video feed at the neighboring Arthur Ashe tennis stadium. Women were not allowed entry to the event, but many viewed it, ironically enough, on the Internet through a live stream broadcast.

The speeches, mostly made in Yiddish with English subtitles on the stadium’s large video screen, condemned the Internet and warned that its impure content poses a serious threat to the Haredi lifestyle and the modesty that the Torah demands.

The day after the rally I was contacted by Ben Sales, a reporter for JTA. He wanted my opinion of the event and a quote about how I understand the role of the Internet in Jewish life. My sense is that he presumed I would criticize the rally’s organizing group for not realizing the gift of the Internet or how it has improved our lives.

Rather than disapproving of the rally or criticizing the speakers for a shortsighted understanding of technology, I explained that these Haredi leaders are correct. And they are. The Internet most certainly jeopardizes their way of life. The Internet will cause Haredi Jews to sin and will tear away at the fabric of their modest lives.

The way the Haredi communities have maintained such strict adherence to their understanding of religious life is by erecting borders to protect themselves from outside influences. Within a controlled, ghettoized environment self-control is not required as much as it is in a free and open society. The Internet virtually removes the ghetto walls and nullifies the borders of the Haredi neighborhoods void. Thus, the perils of the Internet are real to this community.

Many assume that when Haredi leaders speak of the threat of the Internet to their adherents they are referring to pornographic content. I don’t believe this is the case. The Haredi community is well versed on the availability of content filters that will sift out such immodest material. In fact, most of the speakers at the rally forbid their followers from browsing the Web without a filter for inappropriate sites.

Filters take care of removing indecent photos of a sexual nature and images of immodestly dressed women. What an Internet filter will not remove for the Haredi Web surfers however is other material their leaders consider to be explicit. Content that challenges their core beliefs and structured way of life are of most concern to the rally’s organizers. If Haredi Jews cannot exert the self-control needed to avoid content of an immodest nature, they can rely on the filters. However, they will still be subjected to “intellectual porn” – the thoughts and opinions of Jewish scholars that will challenge their thinking.

Scantily clad women can be seen by Haredi Jewish men on their way to Queens when they look at billboards on the side of the highway or magazine covers on sidewalk newsstands. However, Torah commentary written by modern Orthodox, Conservative and Reform rabbis is only accessible to them through an unfiltered and unmonitored Internet. Blog posts, op-eds and doctoral theses are the pernicious enemies that scare Haredi leaders most about the Internet. Viewing pornographic imagery may lead Haredi disciples to sin, but unfiltered use of the Internet leads them to virtually leave their isolated community and could cause them to go off the path, venturing outside of their real life community as well.

Most of the Haredi critics of the Internet recognize that the Internet is necessary in today’s world and cannot be banned entirely. The speakers at the Citi Field rally readily admitted that both men and women in their communities rely on the Internet and other forms of modern technology for business as well as for personal use (banking, shopping and as a medical resource).

The real threat of the Internet to the insular Haredi communities is that the Internet quashes the walls to the outside world that they have so steadfastly erected over the generations. The free flow of information that could undermine the Haredi way of life is the real concern. In that sense, the Internet certainly poses an ever present danger. It will be interesting to see the effects of the Internet on this community in the coming years.