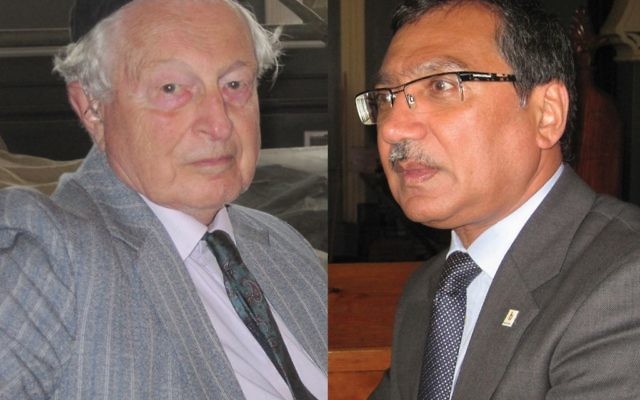 Editor’s note: In the wake of this week’s deadly terror attack in Manchester, we reprieve this story from last year about the strong bond between Jews and Muslims in Bradford, England—about 30 miles north of Manchester. (May 26, 2017)

Bradford, England — The only remaining synagogue in this one-time textile hub was in danger of closing a few years ago — until the city’s Muslim community stepped in to save it.

Faced with an aging, declining membership base, a 135-year-old Moorish Victorian building in need of repairs and little money in the bank, the congregation’s leaders convened a meeting of the few dozen members, who decided to form a fundraising Friends of the Synagogue group.

An informal consortium of Muslim businessmen, a Muslim city official and the Bradford Council for Mosques raised more than $30,000, enough to repair the leaking roof and collapsing eastern wall, and keep the synagogue doors open.

“I was concerned that we would be losing a house of worship,” said Jani Rashid, until recently head of diversity and cohesion for the city’s Department of Children’s Services. A Muslim, he and some friends raised the bulk of the money for the Bradford Synagogue and began including it on school groups’ visits to local houses of worship.

On an overcast afternoon last May, Rudi Leavor, an 88-year-old refugee from Nazi Germany who has served as president of the congregation for several decades, sat next to Rashid on a pew in the dark, dank sanctuary. Long pieces of cloth were stretched over the rows of seats to protect them from falling plaster. Outside, scaffolding surrounded the synagogue, which is on a side street around the corner from the city’s main mosque.

Leavor and Rashid bantered with an easy familiarity, like a nephew and a favorite uncle. As a sign of respect for his work on behalf of the synagogue, Rashid was appointed last year to its board of directors — the first-known example of a Muslim individual in such a position in a Jewish house of worship.

Although the terrorist attacks in Paris two months ago were not aimed — this time — at specifically Jewish targets, they caused many Jews to view Muslims with increased suspicion. But in Bradford, Jewish-Muslim relations remain strong, Leavor said.

“Paris has in no way weakened the bond between ‘my’ Muslims and myself,” he said. “We just continue with our friendship.”

During Chanukah last month, several Muslims, including a pair of MPs and the president of the city’s Council of Mosques, took part in a holiday service at the synagogue.

Elsewhere in England, when hate crimes against British Muslims spiked seven years ago, London’s charedi-led Shomrim civilian patrol began protecting the areas around mosques in the heavily Orthodox Stamford Hill neighborhood, where Jews and Muslims are neighbors; the patrols remain in place today. In Manchester, the decade-old Muslim-Jewish Forum celebrated its anniversary a few months ago at a dinner at City Hall where the country’s chief rabbi and a prominent imam spoke.

And in late December, Britain’s chief rabbi, Ephraim Mirvis, recommended that Jewish schools teach Islam, saying that it would offer Jewish children an opportunity to learn about a “poorly understood religion,” according to news reports. The call comes as British schools, starting in September, will be required to teach at least two faiths as part of their general curriculum in religious studies. A few days after the rabbi’s call, the heads of a British network of Islamic schools announced that it will recommend that its members institute classes in Judaic studies.

At a time when radical Islam is on the rise in continental Europe, especially in France, where Jews are often the targets of physical and verbal attacks, Muslim-Jewish relations here offer an example of interfaith cooperation, observers say.

But there are other currents buffeting the relationship.

A mid-2015 Anti-Defamation League poll found that 54 percent of British Muslims “harbor anti-Semitic attitudes,” compared with 12 percent of the general population; more than a quarter of British Muslims sympathize with the terrorists who committed the fatal attacks on the Hyper Cacher supermarket and Charlie Hebdo satirical magazine in Paris a year ago, according to a new BBC poll; and recent surveys indicate that a growing number of British Jews — especially those in the heavily Jewish Hackney section of London — have experienced anti-Semitic incidents and are beginning to doubt their future in the country.

Following a few small but high-visibility rallies in recent years in London by neo-Nazis – including one last summer – it seems that such anti-Semitic expressions are finding a sympathetic audience among the country’s growing Muslim population.

“The Jewish-Muslim relationship is complicated,” said Philip Rosenberg, director of public affairs at The Board of Deputies of British Jews, the country’s central Jewish umbrella organization. On the whole, relations between the two religious communities are far better than in most European communities, and England’s Muslims tend to be more “moderate” than elsewhere in Europe, Rosenberg and a wide range of Jewish and Muslim representatives told The Jewish Week.

“This isn’t France” was an anthem repeated by both Jews and Muslims.

After last summer’s neo-Nazi rally, which officials shifted to central London from the multiethnic, heavily Jewish Golders Green neighborhood, Muslim groups joined with the Jewish community to launch an interfaith “Golders Green Together” campaign, he said.

Similarly, during Israel’s war against Hamas terrorists in Gaza in the summer of 2014, the Board of Deputies and the Muslim Council of Britain issued a joint plea to “export peace” to the Middle East.

Following the terrorism attacks in Paris in January 2015, leaders of both faiths issued declarations against hate crimes. And the ISIS attacks in Paris in November did not lead to a “negative impact on Muslim-Jewish relations,” Rosenberg said, but rather “made certain activities more poignant,” like in November, when Rabbi Natan Levy, the Board of Deputies’ interfaith and social action manager traveled with Imam Mamadou Seydou Boccoum, director of the London-based Interfaith through the Arts, to Paris to show support for the U.N. Climate Change Conference.

But, anti-Israel — and sometimes, anti-Jewish — sentiment remains present in some British Muslim circles, said Mohammed Amin, co-chair of Manchester’s Muslim-Jewish Forum. “There is no uniformity of views,” he said. “If you want to selectively read the Koran to be anti-Semitic, you can do it.”

“Everything is far from perfect in terms of integration of Muslims into British society and in Muslim-Jewish relations,” said Walter Ruby, who coordinates Muslim-Jewish programming for the New York-based Foundation for Ethnic Understanding. “There are large numbers of Muslims in gritty, immigrant communities in East London, Birmingham and many other places who are jobless, alienated and open to radical appeals. A worrying number of young British Muslims went to join ISIS and there are many others susceptible to those appeals.”

With unrest in the Middle East often boiling over in areas where large numbers of Muslims – and opponents of Israel – live, British Jews are cautious. Many Jewish institutions discreetly identify their sites to avoid calling attention to their presence.

Those caveats aside, Jews and Muslims in England in recent years have engaged in a series of unique cooperative programs including cricket and soccer games, a radio station, a comedy improv group, an interfaith women’s organization, a soup kitchen and a food drive. In Birmingham, half the students at the city’s community Jewish day school are Muslims whose parents see it as offering a high-quality education; inspired by American-style mitzvah-day programs, a London synagogue hosted an Eid celebration for a nearby Somali community whose mosque was destroyed in an arson attack; and Jewish and Muslim women last summer participated in a similar event hosted by London’s Jewish Museum.

England’s 300,000 Jews, several hundred of whom live in Bradford, are outnumbered by Muslims by about 10-to-1.

In a guide to the country’s national elections issued last year by the Muslim Council of Britain was a “pledge to undertake meaningful action to combat Islamophobia, anti-Semitism and all forms of racism.” In the weeks after the election, a Muslim member of Parliament wrote in an essay in the London-based newspaper The Jewish News that “it is important that politicians and community leaders remain focused on what we should do to reassure the Jewish community about its continued safety at home in Britain.” And a Muslim candidate in London’s mayoral race wrote an essay in The Jewish News headlined “I want to be a Muslim mayor who stands up for Jewish rights,” in which he declared he would “never stop fighting racism in all its forms, including anti-Semitism.”

While such Muslim-Jewish efforts are rare in continental Europe, or are typically limited to such political issues as the right to perform ritual slaughter of animals, and in the United States are concentrated at the leadership level, these joint efforts in England have a grassroots, hands-on character, often leading to personal friendships, members of both communities said.

Jews and Muslims told of invitations to each other’s weddings and holiday celebrations. “There is mutual respect here,” said Ian Sharer, a charedi member of London’s city council who spearheaded the Shomrim patrol of mosques. When Muslim residents began appearing in his Stamford Hill neighborhood 30 years ago, Orthodox Jews “were pleased to see religious people moving in,” he said.

“There appears to be a great deal more positive Muslim-Jewish interaction in the UK than in any of its continental neighbors,” Ruby said. “My sense is that the Brits … are in general, more pragmatic and open to doing what works. They are a lot less ideological than the French and other Europeans.”

n The United Kingdom, which has a state religion (The Church of England), is not dogmatically secular like France, and the British are more comfortable exploring their religious practices and identities.

n Most of Great Britain’s Muslims come from Pakistan, India or Bangladesh, and are less intimately attuned to events in the Middle East than the Muslims of France, most of whom have roots in Arab North Africa.

n England’s Muslims are more integrated into and vested in the country’s culture and political system and less open to appeals to commit acts of violence.

n As a hybrid nation, formed by repeated waves of immigration, England does not share Germany’s narrow concept of “Volk” (native people), which has excluded groups like Jews during the Holocaust era and Muslims from Turkey in recent decades.

n An island nation, England has less-fluid borders than countries of continental Europe; everyone has to get along.

“We’re a less ideological country than France,” Amin said. The Israel and the Palestinian conflict doesn’t necessarily poison Jewish-Muslim ties here, Rosenberg said. “We don’t agree on everything, particularly the Middle East,” he said, “but it is sometimes possible to be very critical of certain Israeli government policies and yet be absolutely opposed to anti-Semitism.”

This is particularly evident in Bradford.

“Just because there is a problem in the Middle East doesn’t mean there should be a problem between Muslims and Jews in Bradford,” said Rashid.

The Bradford Muslims who learn about his role in the synagogue’s renovation “are very supportive,” Rashid said.

They’re also supportive of the synagogue itself. During the fundraising appeal, “the Muslims were the first among the people who gave,” Leavor said. Without them, he said, “the synagogue might have had no option but to sell.”