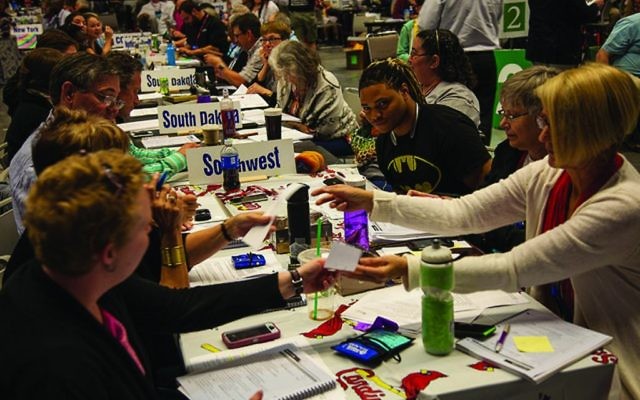 Delegates at the United Church of Christ national conference approved a resolution that criticizes Israel’s treatment of Palestinian children. UCC.org

A resolution criticizing Israel for its treatment of children in military detention, which passed this week at the national conference of the United Church of Christ, is of little concern to the Jewish community in the wider Israel sanctions battle, according to an expert on interfaith activities in the United States.

Ethan Felson, executive director of the Israel Action Network (IAN), a project of The Jewish Federations of North America and the Jewish Coalition for Public Affairs, cited two reasons for his relative optimism: the membership of the mainline Protestant denomination is rapidly aging and shrinking and carries little influence, and the UCC has a long history of criticizing Israel.

Felson said the resolution, which “highlight[ed] the issue of ill-treatment of Palestinian children in Israeli military detention,” was one-sided and ignored changes Israel has made in recent years in dealing with young Palestinians accused of taking part in violence against Israel.

Felson called the UCC an “anti-Israel group” that has witnessed a major drop in its size — to about one million today — in recent decades and wields little influence outside of its own ranks. The denomination has consistently supported policies with a BDS (boycott, divestment and sanctions) bent that are designed to economically cripple Israel, he said.

The UCC resolution, said Felson, was “as if drafted in 2013 — it ignores the 2015 report and the new policies that Israel had implemented.”

The UCC resolution “for the rights of children living under Israeli military occupation” calls upon Israel “to exercise an absolute prohibition” of “torture and ill-treatment of detained children,” and urges the United States to withhold military assistance to Israel because of what the resolution terms “ongoing, documented violations of human rights.”

Israel’s treatment of Palestinian children was the subject of a critical 2013 UNICEF report, which called policies of the Israeli military detention system “widespread, systematic and institutionalized.” The study cited “the arrests of children at their homes between midnight and 5:00 a.m. by heavily armed soldiers,” blindfolding children and tying their hands with plastic ties, “physical and verbal abuse during transfer to an interrogation site” and other putative abuses. “These practices are in violation of international law that protects all children against ill-treatment when in contact with law enforcement, military and judicial institutions.”

A subsequent UNICEF report, in 2015, found that Israel had “taken a series of initiatives — particularly in terms of military legislation and the reinforcement of standard operating procedures that have addressed issues identified. UNICEF views the engagement with the Ministry of Foreign Affairs, the Military Advocate General, the Military Prosecutor and other relevant authorities as productive.”

The UCC resolution, said Felson, was “as if drafted in 2013 — it ignores the 2015 report and the new policies that Israel had implemented.”

The resolution passed Monday morning at the denomination’s 31st General Synod in Baltimore with 79 percent of the delegates. The UCC vote comes a year after the Presbyterian Church USA passed a series of resolutions at its general assembly in support of the BDS movement and calling on Israel to leave the “disputed territories.”

“Long ago they chose a side. They have repeatedly evidenced that they are not interested in any facts against the conclusions they had reached.” – Felson

Catherine Alder, a UCC delegate of the Central Pacific Conference, said in a statement, “This resolution is about the breath of God in Palestinian children. What is happening to them is against international law and against the law of love.”

Proponents of the resolution — including the UCC Palestine-Israel Network (UCC-PIN), a grassroots group of UCC ministers and lay leaders seeking a “just peace” between the two peoples — have stated that “the occupation has created two separate legal systems. Jewish children living in the occupied territories who are arrested are prosecuted through civil courts because they are citizens of Israel.”

“These two legal systems treat children of the same age committing the same infraction quite differently,” said Rev. Leslie Schenk, chair of the committee that reviewed the resolution and pastor of Plymouth Congregational UCC in Madison, Wis. “As a young person eloquently said during our discussion, ‘It seems like this should have come out a long time ago. Why hasn’t this happened yet?’”

Rabbi Noam Marans, director of the American Jewish Committee’s interreligious and intergroup relations department, said in a statement that it was “deeply disappointing that the UCC continues with a trajectory dictated by the BDS … movement, accusing Israel exclusively of human rights violations and preventing the end of the conflict. Israel has pursued peace relentlessly, negotiating accords with Egypt and Jordan, and conducted innumerable negotiations with the Palestinians.

“The real solution to problems of necessary detention of children who commit acts of violence is a peace agreement between Israel and the Palestinians that leads to two states for two peoples,” the statement continued. “The latest UCC resolution does nothing to advance the possibility of peace. Rather, by continuing to demonize Israel, UCC supports those who oppose peace.”

The UCC had begun to divest from corporations with ties to Israel in 2005, one of the first Protestant groups to adopt a BDS policy, Felson said. Two years ago the UCC, in a “spirit … to support Palestinians in their nonviolent struggle for freedom,” again adopted a divestment motion.

“Long ago they chose a side,” Felson said. “They have repeatedly evidenced that they are not interested in any facts against the conclusions they had reached.”