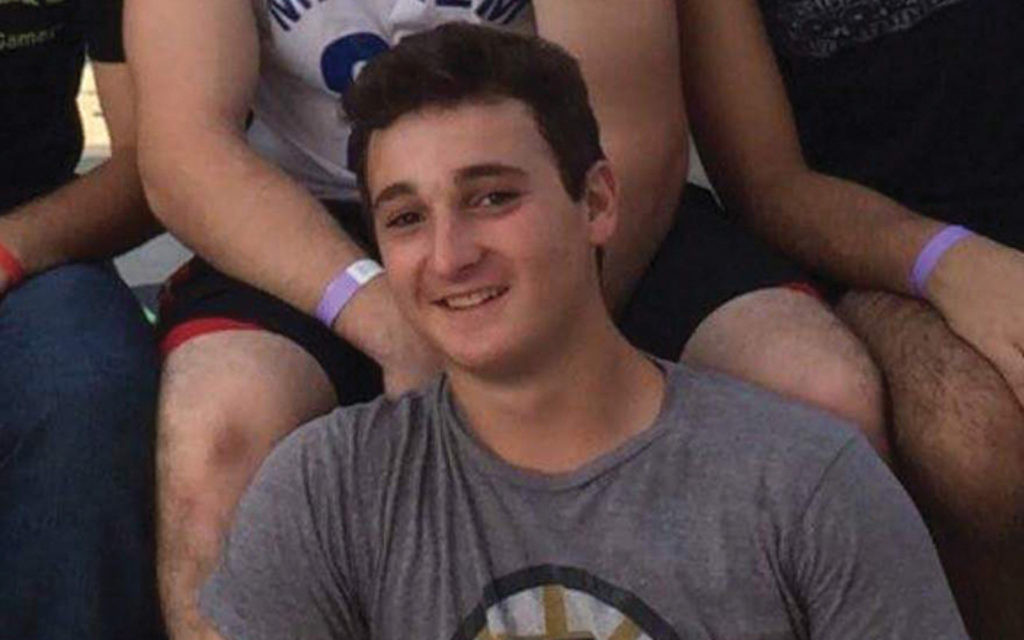 For Modern Orthodox Jews this week, an irresistible force — their passionate love of the Jewish state — is running headlong into an immoveable object — their deep concern for the safety of their children pursuing Torah studies in an increasingly dangerous Israel.

In the wake of the brazen murder last week of an 18-year-old Massachusetts gap-year yeshiva student at a notorious West Bank junction, it appears too soon to tell which would budge.

The death of Ezra Schwartz, a graduate of the Maimonides Academy in Boston who was studying for the year at Yeshivat Ashreinu in Jerusalem, was a tragedy all lovers of Israel mourned. But it poses a particularly excruciating dilemma for a segment of the community whose post-high school one- and two-year programs of religious study have become increasingly popular. To scuttle them would be seen as akin to the community’s turning its back on Israel. But questions are being raised about security concerns when it comes to both schools in the West Bank and school-sponsored trips there.

The director of Israel programs at the Ma’ayanot Yeshiva High School for girls in Teaneck, N.J., Leah Herzog, stands at the pivot point of the dilemma, between students and parents here and the gap-year yeshivas in Israel.

Herzog and her co-Israel guidance counselor Suzanne Cohen told The Jewish Week that while parents are still supporting gap-year programs, there is some reservation now about sending students to schools in the Gush Etzion bloc in the West Bank. (Schwartz was killed at a junction in the Gush by a Palestinian terrorist after a school trip to the area.) Cohen described one parent who expressed serious reservations about sending her daughter to Migdal Oz, a prominent Orthodox girls seminary in Gush Etzion, despite her daughter’s fierce desire to attend.

“The parent was more nervous than the student,” said Cohen.

In response to the level of concern, the S. Daniel Abraham Israel program, Yeshiva University’s Israel branch, is organizing a special conference call and online conversation next week for parents of children currently taking their gap-year in Israel. According to a Y.U. representative, the webinar will focus on methods of dealing with anxiety. Parents of 2,000-plus American gap-year students currently studying at YU-affiliated institutions will be able to text in questions and concerns.

For Nati Faber, a 17-year-old day school student from Detroit on the brink of his gap year, security has become a major factor in selecting a school — at least for his mother.

“I really like [one yeshiva in the West Bank], but with the murders outside of Alon Shvut, my parents don’t know how they feel about it,” wrote Faber in a Facebook message, preferring to keep the name of the school anonymous as he’s still in the decision process. In his high school grade of 17 students, 14 are planning to spend a gap year in Israel after graduation.

“For sure with a lot of my friends, although they are scared, the situation has motivated us to look even more forward to going to a gap year. And in a sense I believe that holds true with their parents as well,” he wrote.

While there have been other American students who have been killed in terrorist attacks in Israel — including Alisa Flatow, a Jewish American student killed in a bus bombing in 1995 — the reaction to Schwartz’s murder, fueled by the immediacy of social media, seemed different. In Israel, American gap-year students said the proximately of the attack — and the likeness of Schwartz to themselves — made it different.

“When Ezra was killed, it made me rethink everything,” wrote Gavi Shleifer, a 19-year-old American student originally from Atlanta, in a Facebook message. “He is my circle, he was a gap year student who just wanted to do good, and was killed while doing good.” Despite the strained security situation and her parents worrying, Shleifer, currently in her second year abroad at a seminary in Jerusalem, plans on making aliyah and remaining in Israel. “I’m not coming back to the states and will fight my parents if they want me to,” she wrote.

Aaron Eckstein, a 19-year-old gap year student from Passaic, N.J., told The Jewish Week that “helicopter parenting” — something he sees quite often among his peers — won’t work during the Israel trip abroad.

“A lot of yeshivas are asking parents to confirm that their kids can go to the Gush — in my opinion, these type of hard-stop rules are a big joke,” said Eckstein, who plans to join a combat unit in the Israel Defense Forces after completing his yeshiva study. The weekend after Schwartz was killed, Eckstein traveled to Efrat, a large settlement in the Gush, to visit friends.

“Parents need to realize that saying their kids can’t go here and can’t go there won’t change the situation.”

No doubt that adolescent attitude adds to parental worries, feeling less able to direct their children’s comings and goings from 6,000 miles away.

Maya Silver, an American student spending her gap year at a seminary in Jerusalem, wrote a letter to her worried parents back home describing her reaction to Schwartz’s murder.

“This attack is like a punch in the stomach,” she wrote, describing her subsequent confusion, anger, and numbness. “It was so tragic walking through the Rova [the Jewish Quarter of the Old City of Jerusalem] and knowing that every person you saw under a certain age was feeling a deep, indescribable pain… One of us has died.” She ended the letter by telling her parents not to worry about her “too much”… “I’m not in the Gush!”

Rabbi Seth Linfield, executive director of Yeshiva of Flatbush, a large Modern Orthodox high school in Brooklyn, said that while parents are “anxious,” the school expects to send a similar or slightly higher number of students to Israel for a gap-year this coming fall. In an average graduating class of 180 students, about 40 students go to Israel for the year, several attending yeshivot and seminaries in the West Bank.

“The gap year has always been a complicated topic, but there’s been no spike in the conversation after last week’s attacks,” he told The Jewish Week. The parent of a graduating high school senior who is considering spending her gap year at Migdal Oz, Rabbi Linfield said that “depriving” his daughter and other graduating seniors of the gap-year experience would be “giving terrorists a victory without firing a shot.”

Rabbi Linfield declined to comment on whether or not Schwartz’s death resulted partially from a lapse of sound security practices on the part of his yeshiva. He said he has not yet heard those concerns voiced by parents.

“When we, as a school and as parents, send our children to institutions in Israel, we sent them with confidence that the institutions will invoke the highest standards of safety and security,” he said.

Young Judea, a pluralistic Zionist youth group best known for its post-high school year course, specifies on its website that its participants are not allowed to enter the West Bank without permission of the director of the course and parental consent communicated to the director within 48 hours of expected travel. The Jewish Week was unable to speak with a Young Judea representative directly.

Peninah Kaplansky, co-founder and director of Here Next Year, a nonprofit that helps American gap-year students extend their stay in Israel by joining the army or enrolling in an Israeli university, said that in the days directly after Schwartz’s death she saw an uptick in the number of students inquiring about staying in Israel next year.

“In the past few days we’ve received dozens of e-mails asking about our programming and resources,” said Kaplansky, 24, originally from West Hempstead and currently studying at Bar-Ilan University in Jerusalem. “On one hand, students are saying ‘that could have been me’— on the other hand, it’s emboldening for them. We’ve been hurt, but we’re going to respond by asking how can we have the greatest impact on Israel.”

For Schwartz’s fellow students at Yeshivat Ashreinu, the question of how to move forward is still raw.

“As the days continue to pass by, and the death of one of my best friends continues to become more real, all I can think about is what would Ezra want,” Aryeh Sunshine, 18, a classmate of Schwartz’s, told The Jewish Week in a Facebook message. Originally from Cleveland and with plans to attend Ohio State University next year, he has no intention to cut his gap year short, despite the blow.

“Ezra loved Israel and enjoyed every second that he spent in this beautiful country. Although there continues to be attacks on innocent Israeli and Jewish civilians, instead of being scared and tempted to leave Israel, Ezra would want the complete opposite. …The best thing we, the Jewish people can do right now, is stick together.”